So, for a few years now, Bill and I have been discussing taking “a trip” somewhere to one of the big car shows – Goodguys, Hershey, something like that. As car guys, neither of us had been to one of the REALLY big shows, even though we’ve both owned muscle, classic and high performance cars for… pretty much ever.

So, we talked about it for a few years, and finally settled on something a little different – The 2012 Hot Rod Power Tour. Conveniently, Bill had acquired a car perfect for the tour – his ’69 GTO Judge. It’s an expresso brown, 4 speed drivin’ machine. So, I flew out to Kansas City from Atlanta, jumped into the car with him, and off we went.

Met up with the Power Tour about 1/2 way in, in Miami, OK, and completed the tour in Arlington, TX.

What a blast. We saw some cool cars, some cool sights, and met some great folks. The last night in Arlington, we pretty much settled on doing the tour again in 2013, with one major adjustment – not in a 4 speed RA IV Judge. That car performed beautifully, with not even a hiccup, but boy it was loud and slightly less than optimally comfortable… And trying to cruise on the highway with “the gang” at anything over 70 meant RPM’s over 3400 for extended periods of time. 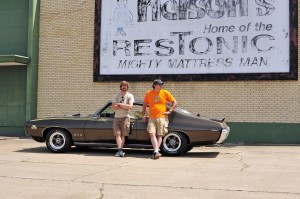 During a lunch break somewhere in Oklahoma we pay respects to the Restonic Mattress Man.

So, then we pondered what else to drive. I’ve got a CTS-V wagon – we saw others driving those on the Tour… Nah, way too new, too easy. Bill’s ’95 Impala SS? It’s got a stroker motor in it, and some go-faster doodads… Hmm… Nah, again, too easy.

Discussed buying a car specifically for The Tour, and ran through a number of options. Nothing thrilling, there.

We came back around to the now-obvious choice – Bill’s ’72 Duster. 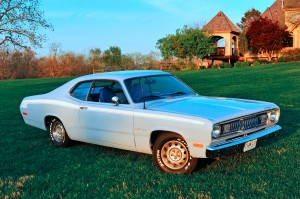 Sweet beauty shot of the Duster
in spring at the Kay estate.

Now, this is a baby blue duster, with a 340 and a 727. I guess that’s supposed to be good – it says so on the sticker on the car! It’s probably more than capable of the trip, a perfect choice.

We then spent the return trip from Arlington to Kansas City discussing The Duster. This leads this project and subsequently this blog. All that time for planning meant all kinds of plans.

The Plans:
Swap in a modern FI Chrysler motor (Selected the 6.1 Hemi from a busted up ’06 SRT8 Charger)
Swap in a modern overdrive auto transmission (NAG1 from the same car)
Air Conditioning (comfort!)
Update the suspension and brakes to match what the motor brings to the party

A week or so later, the engine, trans and associated electronics and doodads have arrived, and the selections are made for Suspension, Brakes and associated systems – We’re on our way, and you’re along for the ride.