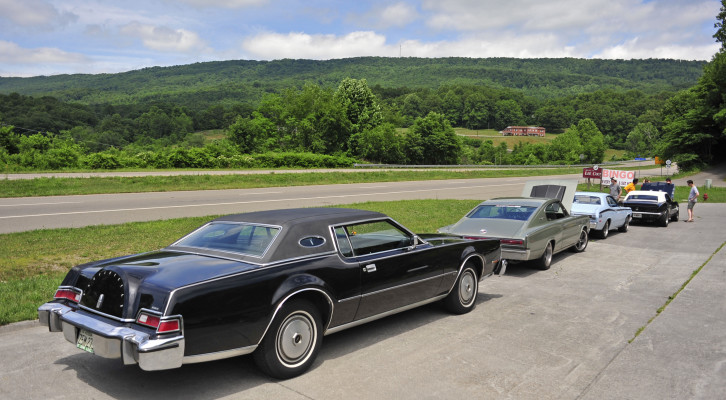 When last we spoke, Mr. Black and I had just rolled into the zMax Dragway in lovely Concord, NC. I was perplexed to find out the other half of our contingent had arrived only minutes before despite having a much shorter drive. Turns out they had a fairly mild mechanical issue that slowed them down. I’m not exactly sure what the issue was. Maybe Jim will shed some light on things. On top of that, Rachel is a sucker for outlet malls and Jim is fascinated by any attraction advertised on a billboard. This could cause problems later as she Rachel had settled into the job of Chief navigator for the days she was on the tour. Fortunately she was able to focus on the route and ignore the urge to shop. 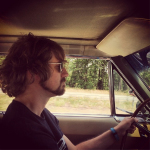 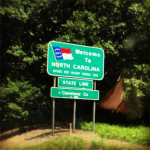 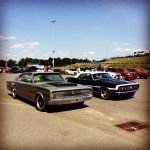 It was late in the day and everybody seemed a bit wind blown and out of sorts. To combat this I sought solace in Mr. Black’s trunk bar. With cold beers in hand he and I ventured into the venue to take care of some very important business: stickers. It was crucial that we get our hands on those iconic Hot Rod Power Tour 2014 decals. I opted for the $10 donation to get the “Long Haul Gang” decal, too. Proceeds support breast cancer research and being a fan of breasts I was happy to help.

After only a few minutes of wandering the grounds Mr. Black understood why I pleaded with him to bring the Lincoln instead of his Corvette. The place was rotten with them. ’74 Lincoln Mk IVs, not so much. We took in the sights  for a while then headed back to the cars. It was decided by unanimous decision to call it a day and seek out shelter, food and adult beverages. Then after a good night’s sleep we’d get up and do it again. 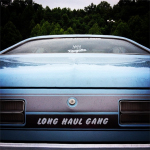 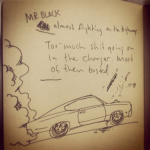 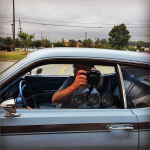 The Duster and I gained a passenger for the trip to Knoxville. It seems Tim had had enough of riding in the back seat of Jim’s Charger so he threw in with me, long term hearing be damned. It was overcast and cool as we headed out. There may have been a sprinkle or two but nothing that warranted rolling up the windows. We gathered at a Quicktrip for gasoline, doughnuts, ice, etc. It was here that the decision was made to seek out an auto parts store. Jim’s Charger was equipped with an oil overflow catch can that sprung a hose, dousing a header in oil and creating a pungent plume of blue smoke. It was also burning oil and Jim needed to restock. This would become a trend. 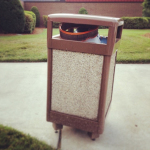 Only on the Tour. 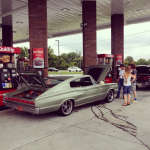 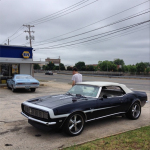 With food in our bellies, fuel in our tanks and extra oil in the trunk, we officially embarked on our journey to Knoxville. If you’ve never motored around the North Carolina and Eastern Tennessee area you’re missing some good roads and great views. We followed the official Power Tour route and were making pretty good time. As usual we got a late start so we weren’t a part of the main throng of cars. We weren’t alone, either. There were plenty of other cars to look at. Drivers always stop at scenic spots for provisions, as well, so there’s almost always something to see. Almost. At some point Tim and I tucked in behind the Charger. It didn’t take long for our eyes to water and have our visibility impacted by the Charger’s hazy blue wake. It was starting to become apparent that there may be a serious problem. Undeterred, we soldiered forth until a distress call crackled across the radio. It seems Michel’s Camaro was acting up. Something about the brakes. 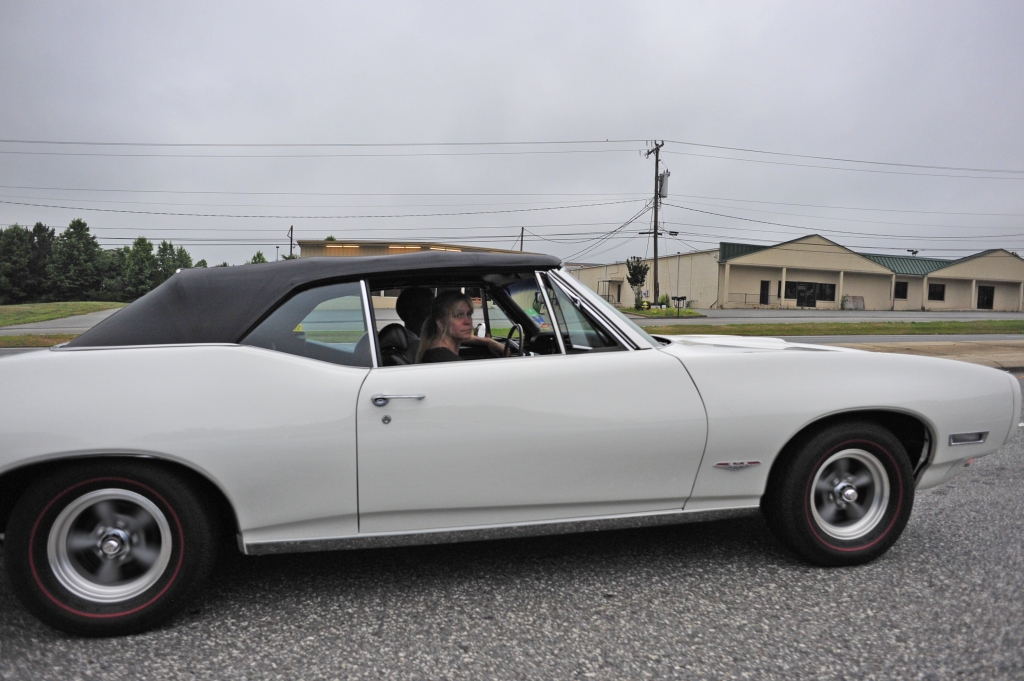 The passenger in this very nice ’68 GTO ragtop seemed perplexed by the Duster’s camera rig.

We had been on the road for a while and a spot was found to pull over for stretching, beverages and an inspection of the right front wheel of the Camaro. It was no longer the same color as the others. A copious amount of brake dust had accumulated and Michel reported a nasty vibration manifesting itself through the steering wheel. It was putting off a lot of heat. It seemed the caliper was sticking. There wasn’t much to do at this point so we let it cool off and the collective decision was made to stay on the road to Knoxville as best we could and deal with the Camaro’s brakes there. Knoxville is Michel’s home town and the resources were there to dig into the Camaro’s problem. We let the brakes cool and got back on the road. All was well for a while. 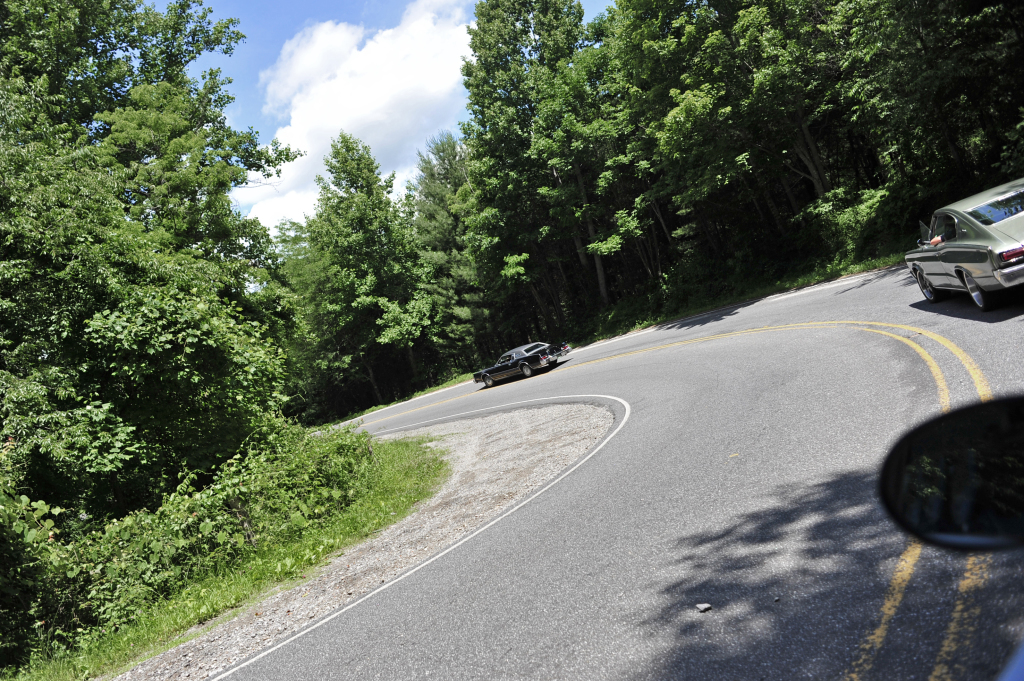 Somehow Mr. Black leads the pack through the twisties in the Lincoln 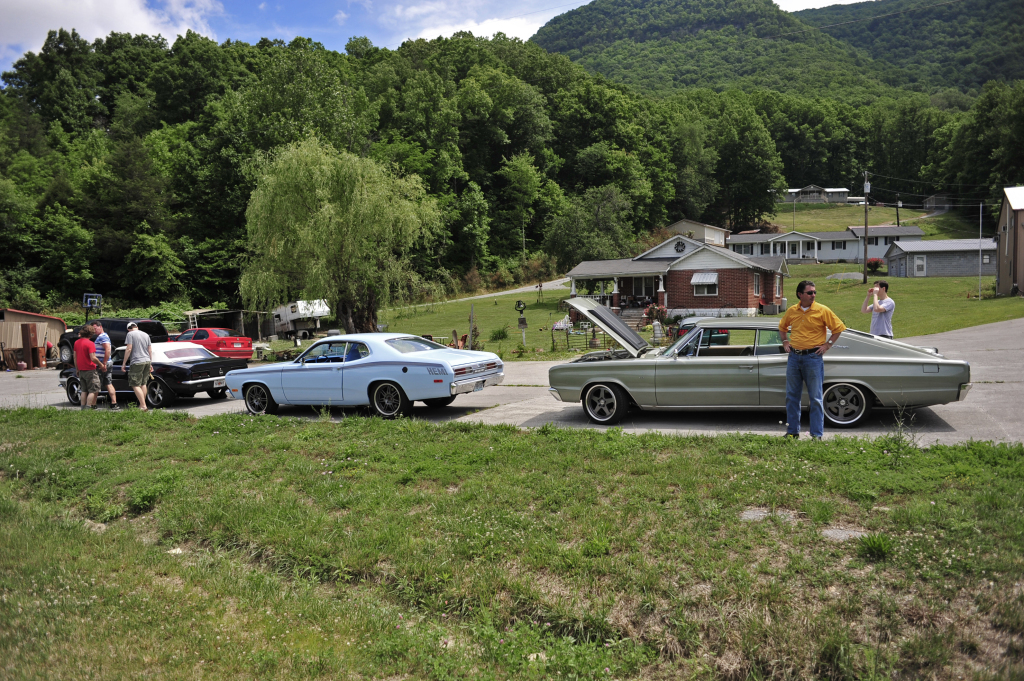 Mr. Black looks on during one of the many stops to let the Camaro’s brakes cool. Tim adjusts his X-ray goggles. 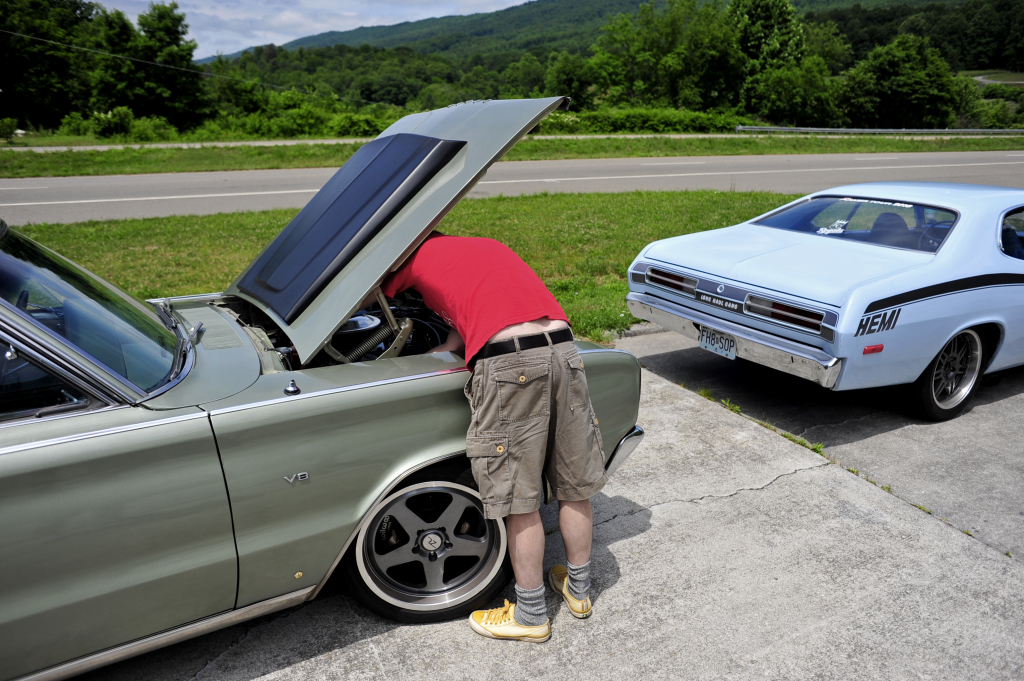 While the Camaro cools, Jim tends to the Charger. I suspect he is adding oil to the big, thirsty 440. 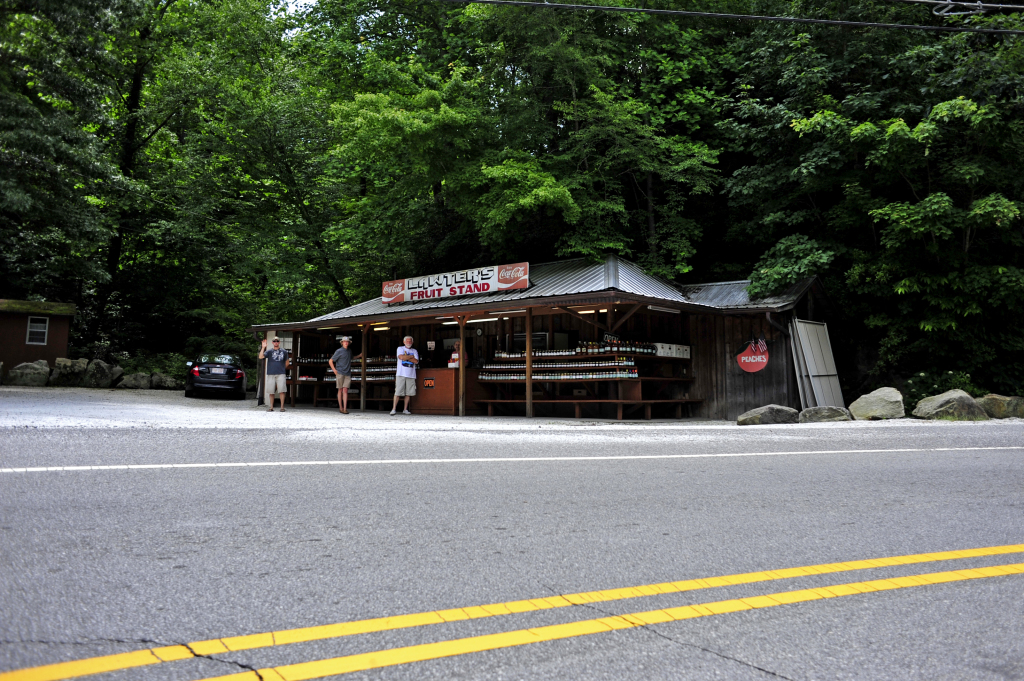 Some guy seeking delicious fruit takes time to wave to the Duster. 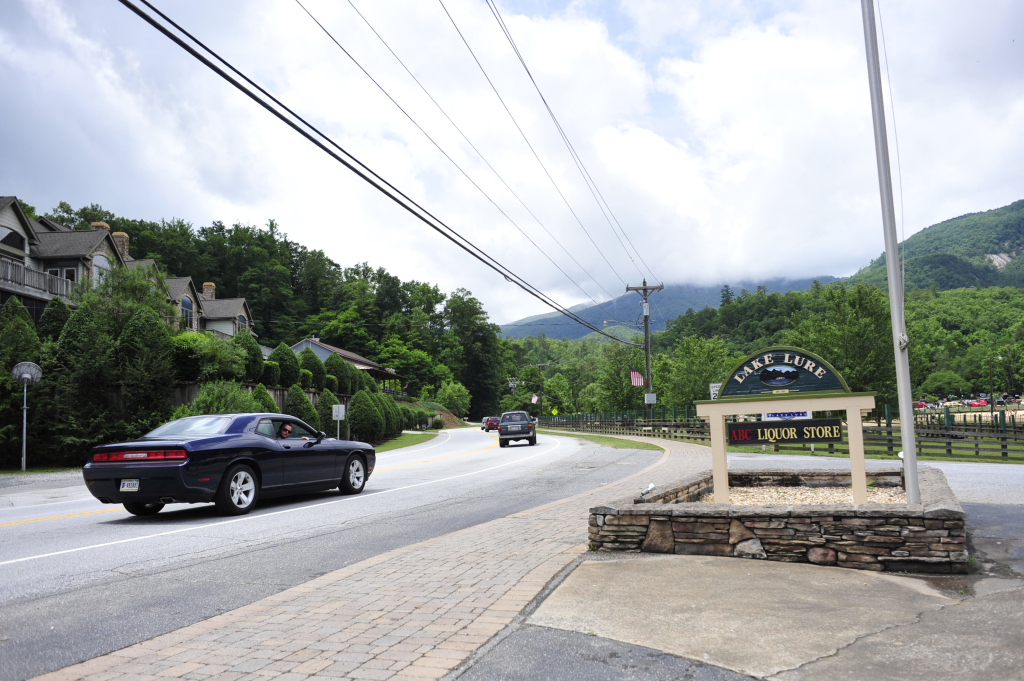 I suspect the passenger of that late-model Challenger would rather be rolling in the Duster. Lake Lure is a lovely place, by the way. 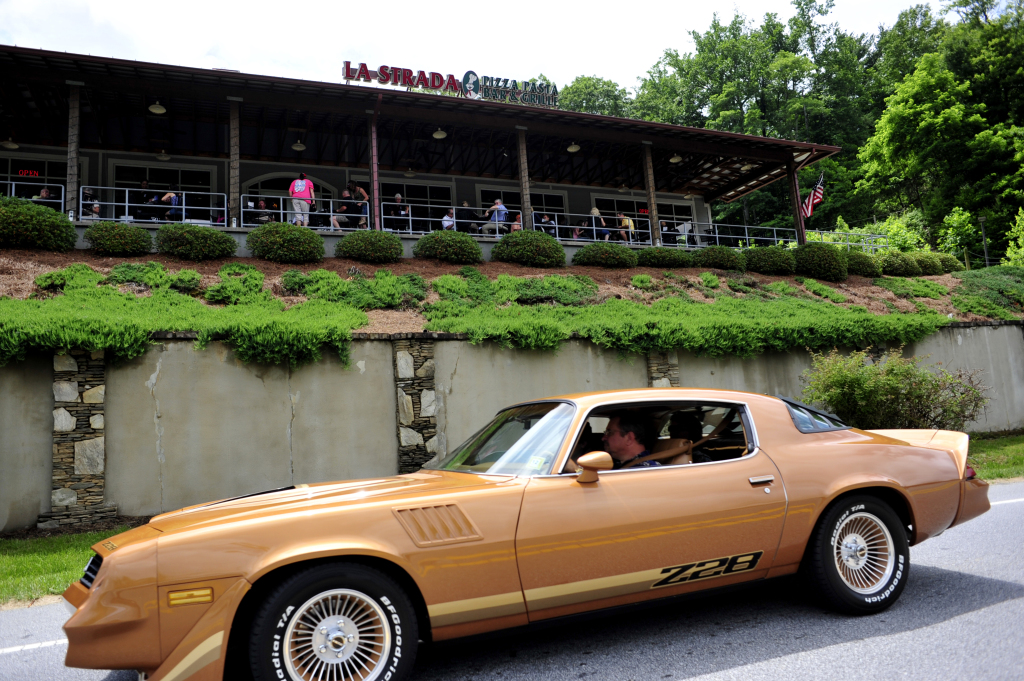 Michel’s brake problem would dog us all day, making the trip to Knoxville a long one. Lucky for us, we were in a beautiful part of the country so at least the stops were scenic. Tensions ran just a bit high but morale was higher. Nobody wanted to let our deliberate pace do in what was otherwise a nice drive. Credit goes to Michel for his good spirits during this time. I’m sure he was having the least amount of fun having to deal with harsh vibrations and worry about his ride. Brake issues aside, his Camaro is an extremely nice car. It’s a factory SS/RS 396 car currently powered by a 502 crate engine. I believe he has the numbers matching 396 on a stand in his garage. I am remiss for not having a good photo highlighting the nice fit, finish and attention to detail. I will fix that next time! Anyway, it was a shame to see him and his son, Valen having to deal with car problems on their maiden Power Tour. 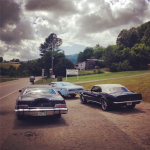 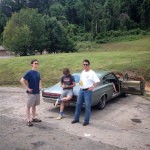 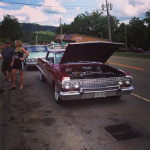 As expected, we all managed to roll into the Knoxville Power Tour Venue. As usual it was poorly organized and it took a while to figure out where to go. Some grimacing cop pointed Tim and I in some direction for another that may or may not have helped us all gather at the far end of the grounds. It was late in the day so we weren’t surprised to wind up on the periphery of the action. We made the hike to the stage for Long Hauler card stamping and whatnot. Eventually we made it back to our cars to settling comfortably into our folding chairs. Speaking of chairs, Tim has probably the  greatest folding chair ever. It has a retractable foot rest AND an umbrella. 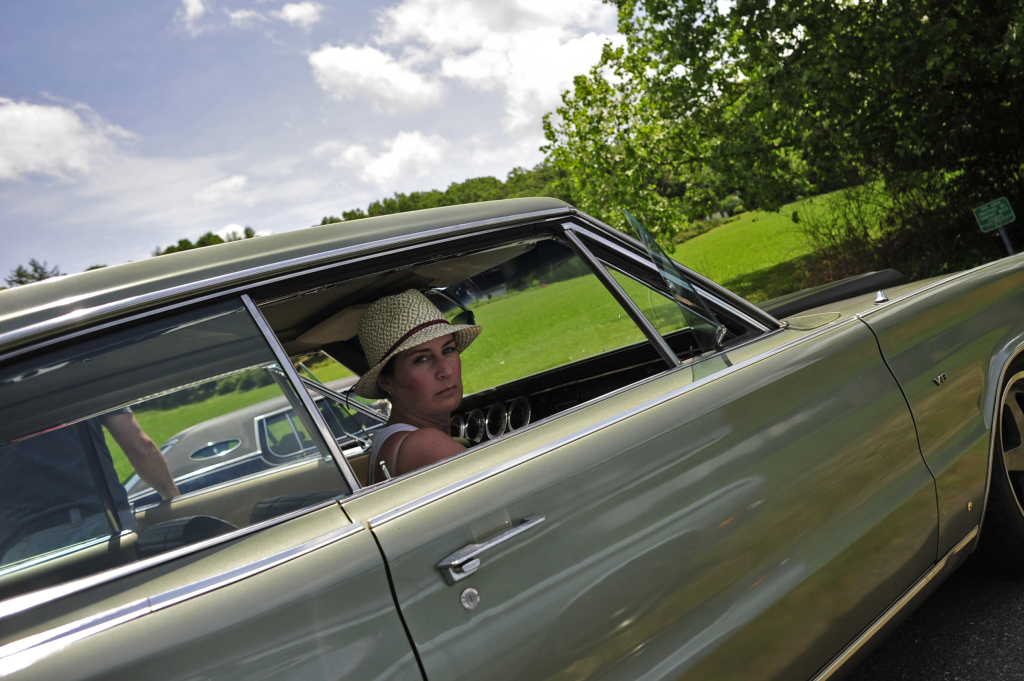 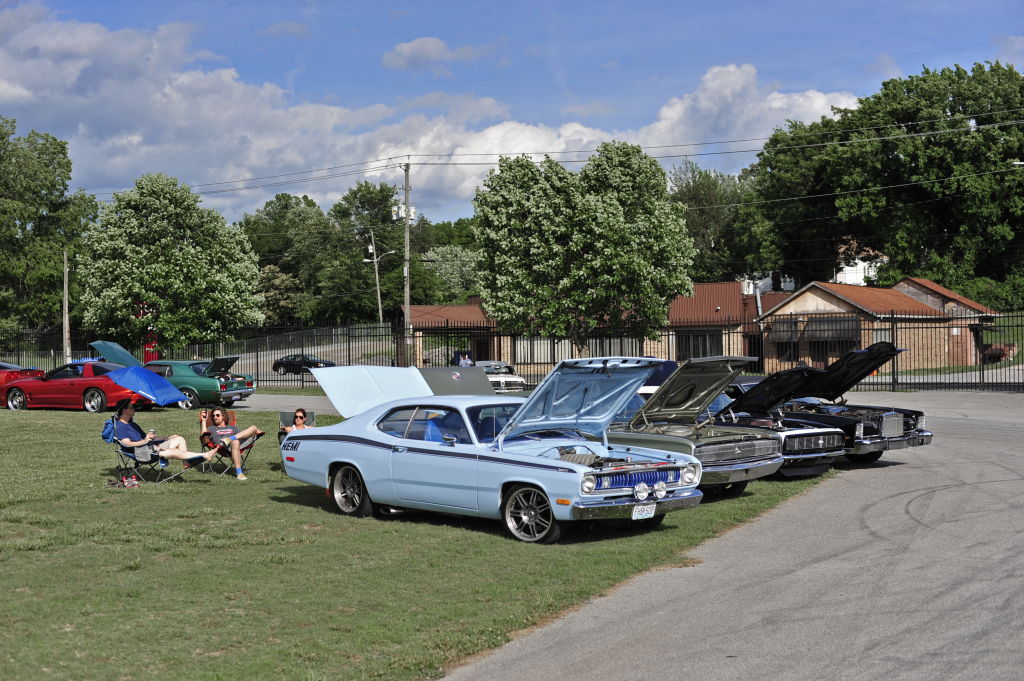 See how Tim’s face is shaded despite the fact he’s sitting in the sun while his blindingly white legs are comfortable propped up? I’m telling you, that chair is sweet. 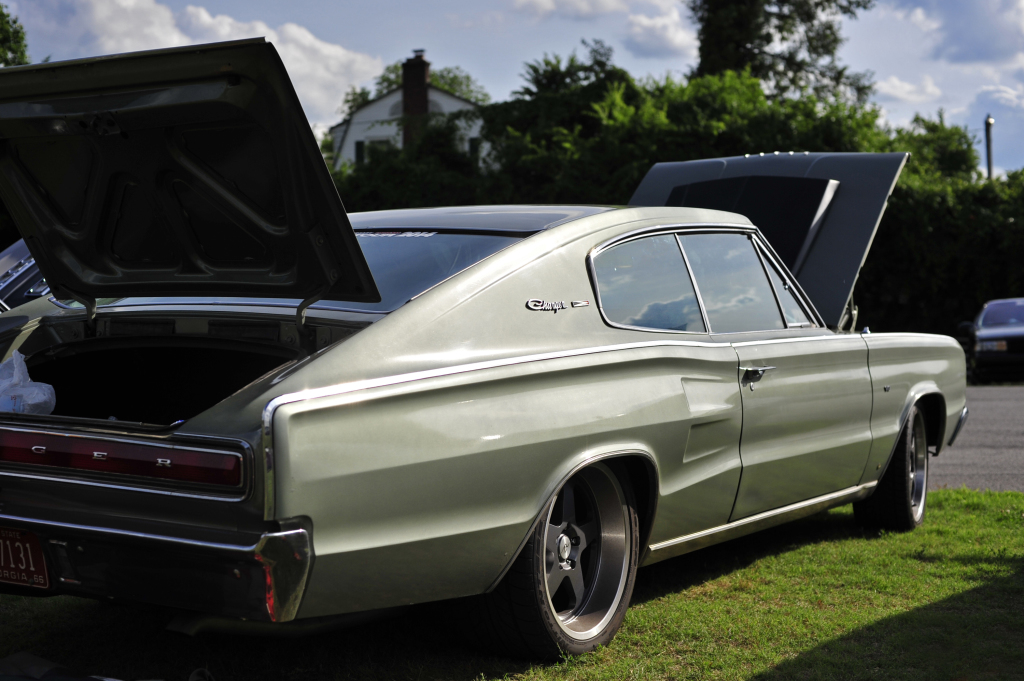 This was my primary view upon returning to the cars and setting up my umbrellaless chair. Could be worse.

Day two was in the books. Despite some vexing mechanical challenges, we had made it to day two of our Power Tour long haul. We would be living it up at the Hotel Oliver in downtown Knoxville later. They have a great bar that whips up some awesome cocktails. It’s dark with a fireplace flanked by two bookcases and comfortable seating. Plus a creepy, awesome painting above the mantle. If you’ve been there you know what I’m talking about. Otherwise, go check it out.

I would go on to meet up with an old friend who now lives and works in Knoxville. He and his lovely bride took me out for dinner and drinks. Then more drinks. I wouldn’t hit the sack until after two AM and day three of my Power Tour would start roughly.

I believe it's time for me to fly

The Judge attends the Art of the Car Concours!

Every instance here of “Jim” should probably be “Jim and Rachel,” as she was copilot (and general navigator!) for the first days of the tour…

Screw that! I found a sweet photo of her in the Charger instead.

My genes herald from lands of grey mist and heather. We have no need for silly pigmentation.

Amalgamated Poem & Song is down the hall on the left.