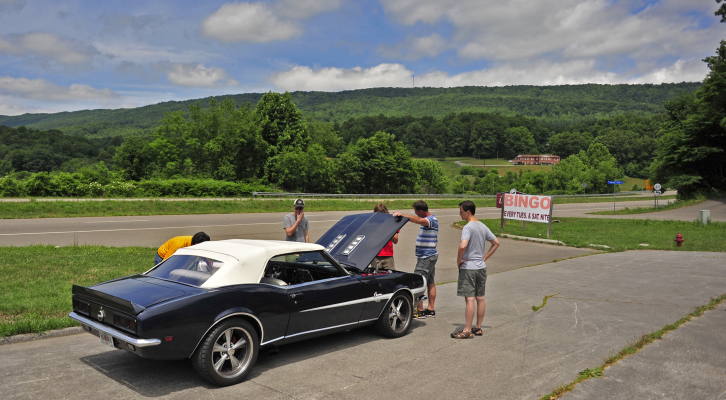 Listen: The Peter Kern Library is not a place one goes to find the latest Oprah Book Club suggestions or Fifty Shades of Crap. It’s not a well lit place to contemplate the written word. Unless, of course, you wish to digest a drink menu or ponder the fine print on a bottle of whiskey. It IS a speakeasy off the lobby of the Oliver Hotel in Knoxville, TN. It also happens to be the place where day three of my Power Tour started to unravel before  it even began.

The road to Knoxville on day two unfolded in such a way that we never really stopped for lunch. It was probably 7 pm by the time I got checked in to the Oliver and found my room. After a hot shower and a change of clothes I wandered down to the speakeasy hoping to meet up with some of my posse. I found Jim and Rachel sparwled in some sexy ass seats enjoying adult beverages. They too were recently bathed. You know how I could tell? Jim’s hair was still wet, making it nearly impossible for him to execute a proper hair flip. Tim wasn’t down there yet but would be soon. Mr. Black had wandered off to find something to eat and reconnoiter the rim. Michel and Valen were in a garage someplace trying to figure out what was wrong with the Camaro’s brakes. 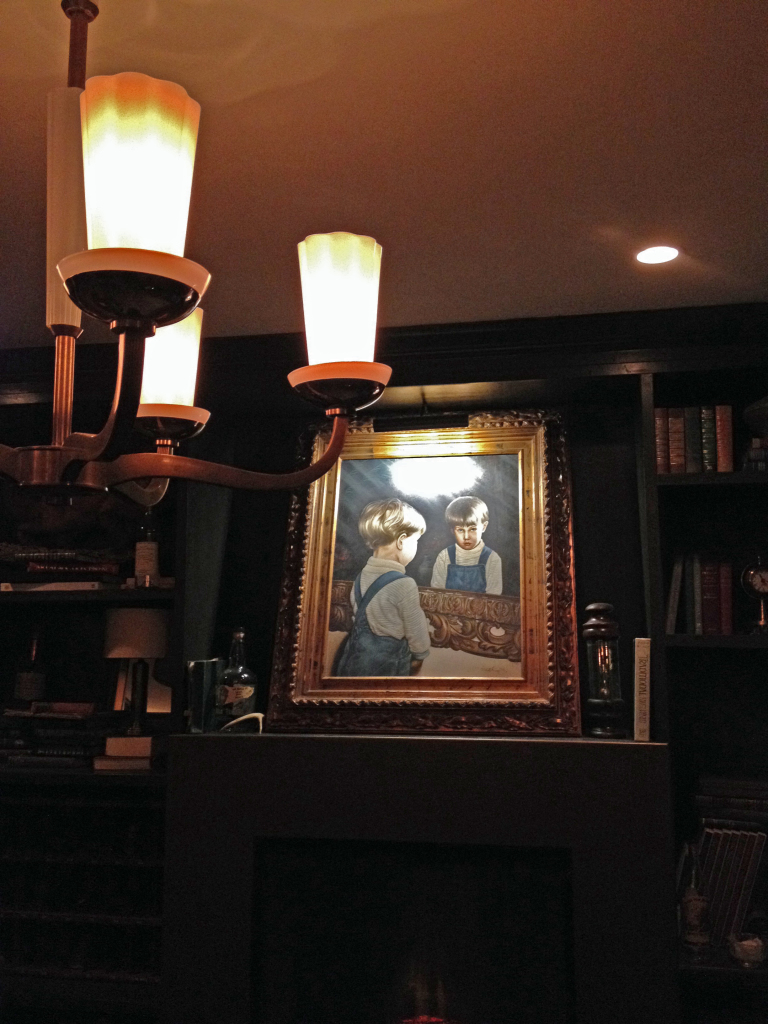 Every library needs a wooden mantle, artwork and nice lighting. Oh, and books.

I ordered a rye Manhattan up and it was delicious. I guzzled it down and ordered another. A sense of well being washed over me. There was one thing, though. I couldn’t shake the feeling somebody was watching me. Jim and Rachel eventually wandered off to find some dinner and I was left alone to wait for my friend Nick to show up with his bride. It wouldn’t be long before they appeared and we ordered a round of cocktails. I hadn’t seen Nick in years and it was nice to catch up. He looked older but good and as happy as a Creative Director at an ad agency can look. I had never met Crystal before and she was a peach.

The clock was ticking on a Sunday evening and our dinner options were dwindling rapidly. Nick located a decent bar/restaurant kind of place. We sat outside on the roof to enjoy the night air and I was able to see the Sunshpere, which was built for the 1982 World’s Fair. It was magnificent. We ate pizza and other things. It had been morning since I had a doughnut and hours since sampling some of Tim’s beef jerky. I was happy to finally have something substantial in my belly because I was getting pretty drunk. Then Nick and I started sampling assorted pale ales. Some Indian, some not. This would go on for a while before we decided to return to the speakeasy.

Upon arriving at the Oliver, we were greeted by a pair of Lamborghinis parked out front. One of them was metallic green Aventador with a Union Jack painted on the roof. The other Lambo was also green. I think it was a Gallardo. We gawked at the Lambos and said things like “get a load of that” and “not every day you see one of those.” 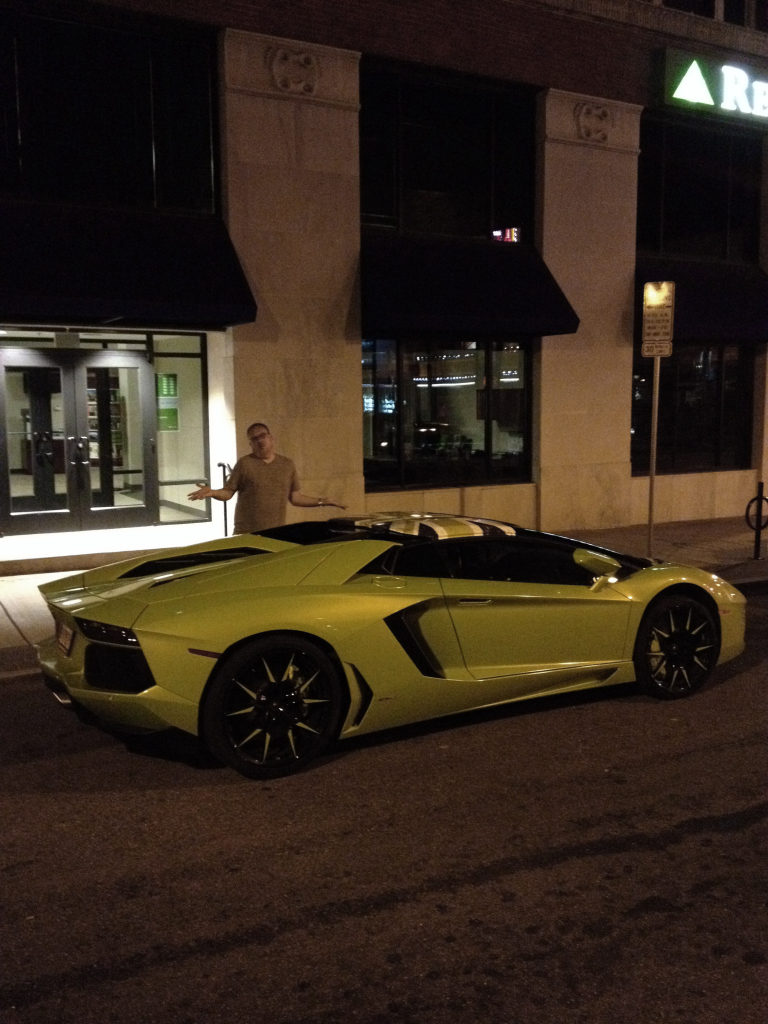 Can you blame Nick for being baffled? Have you ever even seen one of these things up close? It was amazing.

Emboldened by the Lamborghini sighting, we strolled into the Peter Kern Library like we owned the place and ordered a round. I don’t recall what we had. Nor do I remember much from that moment on. I do have a vague memory of the bartender telling us that the current market value of a bottle of Pappy Van Winkle 23 year old whiskey was $1600. Oh, and also, I never did shake the feeling somebody was watching me in that place.

My lovely wife Cheryl once bought a bottle of twenty-three year old Pappy Van Winkle for $130. Turns out, the liquor store couldn’t sell the shit and just wanted to get rid of it. Ah, the good old days. Pretty sure that other bottle was something fancy, too.

It had to be after three o’clock in the morning before my head hit the pillow and I proved to be the last one ready to head out in the morning. The crew had gathered in the lobby and greeted me with concerned glances as the elevator doors slid open. One of them let out a quiet gasp. Seems I wasn’t looking my best. But it was time to go.

Spirits were high as we distanced ourselves from the glow of the Sunsphere. The Camaro was responding well to a late-night thrash to remedy the brakes. While the Charger was still burning oil, it appeared to be a manageable issue. Then things changed.

About an hour out of Louisville an SOS crackled from the handheld radio. The Camaro started acting up again. This time one of the front brakes was sticking. The mild headache and queasy stomach brought on by my hangover was joined by a sinking feeling in my chest and an unexpected clinching of my anus. Was this really happening? Was that fucking Camaro really going to bring our progress to a frustrating crawl once again? Of course it was. The convoy pulled over to assess things and weigh our options. None of them were very good so we let the balky caliper cool then hit the road. This scenario would be repeated several times throughout the day.

The official Power Tour route from Knoxville, TN to Charleston, WV was quite nice, by the way. Good roads and beautiful views helped to temper the frustration brought on by the woes of the Camaro. 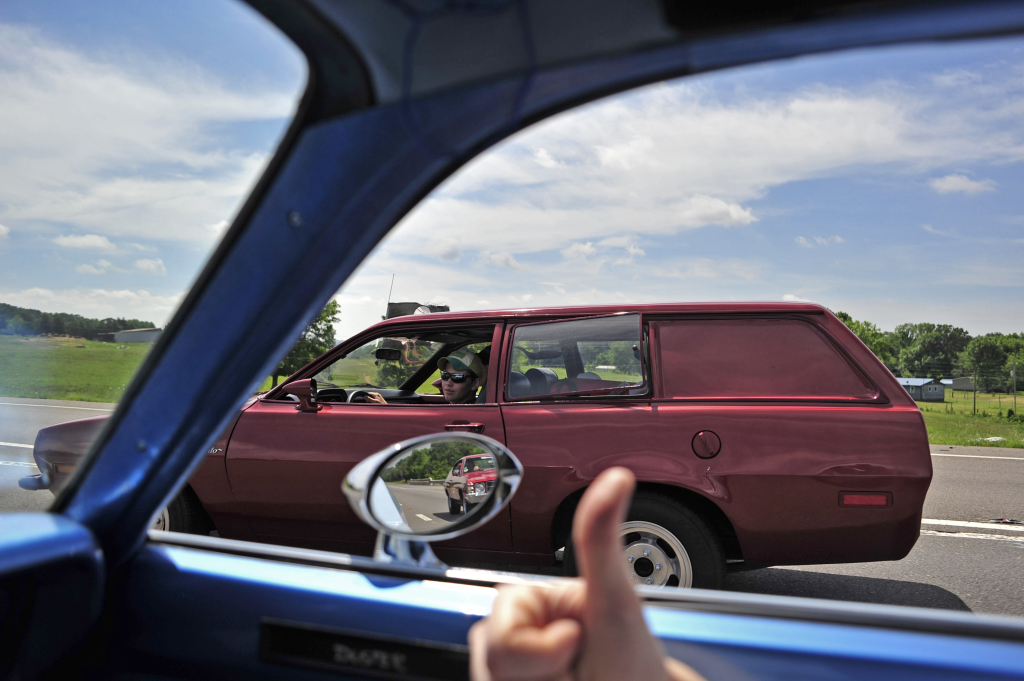 What’s not to like about a turbocharged Pinto wagon sporting slotted mags?

The next announcement on the radio was that of Mr. Black needing to pull over to fuel up the Lincoln. As gas flowed, oil poured and brakes cooled, bellies began grumbling. It was time for lunch. I had recovered from my assorted physical maladies and was looking forward to a greasy cheeseburger or something. With no enticing options near the gas station we got back on the road for just a few miles until a populated area bustling with commerce appeared. It seemed our best option would be the Steak and Shake. This did not sit well with Jim, as he was still sticking with pledge to abstain from dining at national chains. He pulled away never to be seen again until we arrived at the venue in Charlston. Oh! I don’t think I’ve mentioned that Michel owns two successful gourmet restaurants in Atlanta, GA. They’re called “Haven” and “Valenza” and happen to be right next to each other. You should check them out if you ever get the chance. Anyway, he seemed to enjoy his Steakburger and fries. 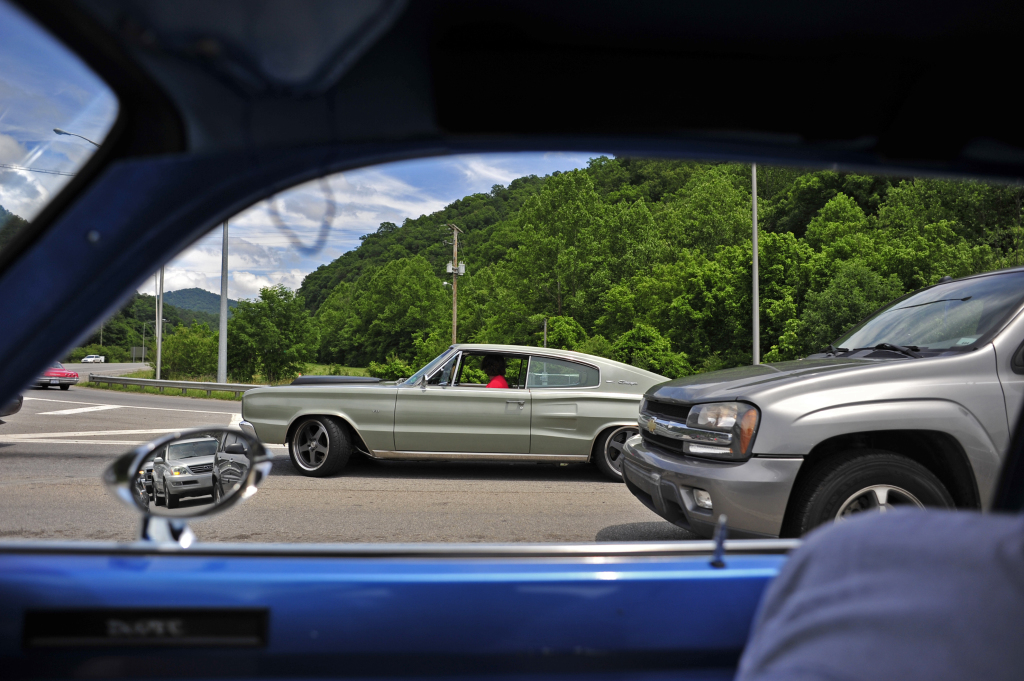 Outraged by the group’s choice for lunch, Jim pulls away from the pack. Was he successful in his quest for fancier cuisine? It is a mystery.

I’m sure fascinating things happened between the time we left the Steak and Shake and our arrival at the Power Tour venue. But my word count is now at 1,098 and I really think I need to wrap this up. Frankly, I’m pretty amazed you’re still even here. 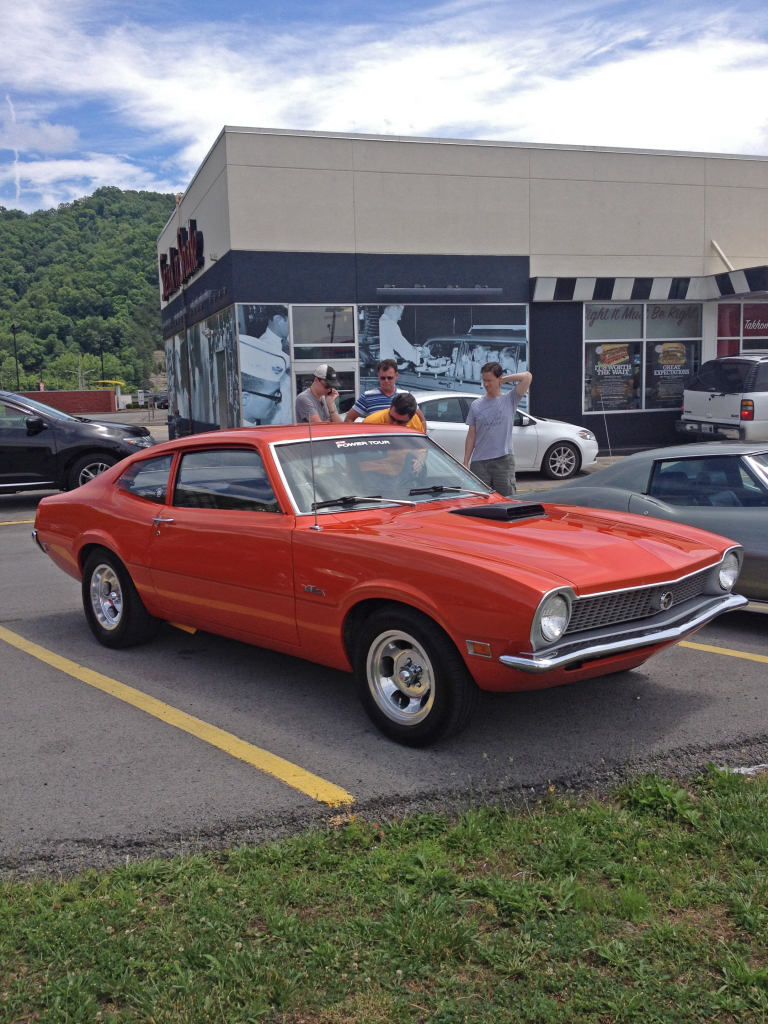 I’m pretty sure Michel was rethinking his Camaro build upon laying eyes on this kick ass Maverick. While Mr. Black takes a closer look, Tim’s world is blown to bits.

So, the venue. What a mess. As we approached the bridge we could see the cars and bustle of the Power Tour on a main road that ran alongside a river. It seem to sprawl for miles, which seemed odd. Usually the venues are more like big circles or squares. Given our Camaro induced delays, we were stragglers and I was growing concerned that we would not be able to punch our Long Hauler cards in time.

Hear are some cool cars from our stop in Charleston: 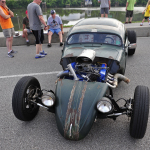 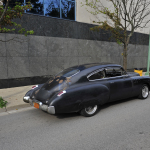 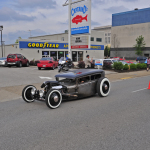 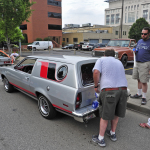 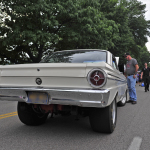 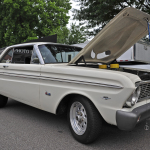 The punching of the cards is very important. It’s really the only thing during the Power Tour one HAS to do. I mean it’s kind of the whole point for Long Haulers such as ourselves. Sure, the stuff one gets for going all the way is pretty trivial, but God dammit, it’s MY trivial stuff. I build a freaking 6.1 Duster and drove it thousands of miles so I can get my hands on that sweet, sweet loot! Anyway, the venue. Once across the bridge it was pretty much every man for himself. Tim and I instantly lost track of Michel and Valen and Mr. Black. For all we knew the Camaro was in a ditch with flames shooting out of the wheel wells. Wherever the Lincoln was, it was fine. I ended up parking the Duster at the end of that long line of cars, which seemed to be about eight miles from the main stage and the clocks. 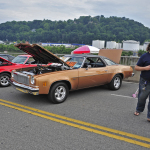 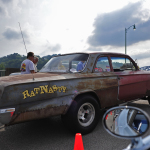 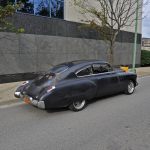 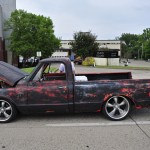 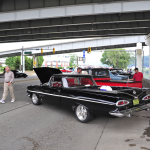 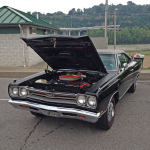 Tim and I grabbed the credentials and began our march for redemption. Along the way we were reunited with our travelling companions and there was much rejoicing. Except for Jim. He looked kind of pissed and could barely look at the Charger without sneering. We would later learn that the Charger consumed seven quarts of oil on the day and required the replacement of two fouled spark plugs. 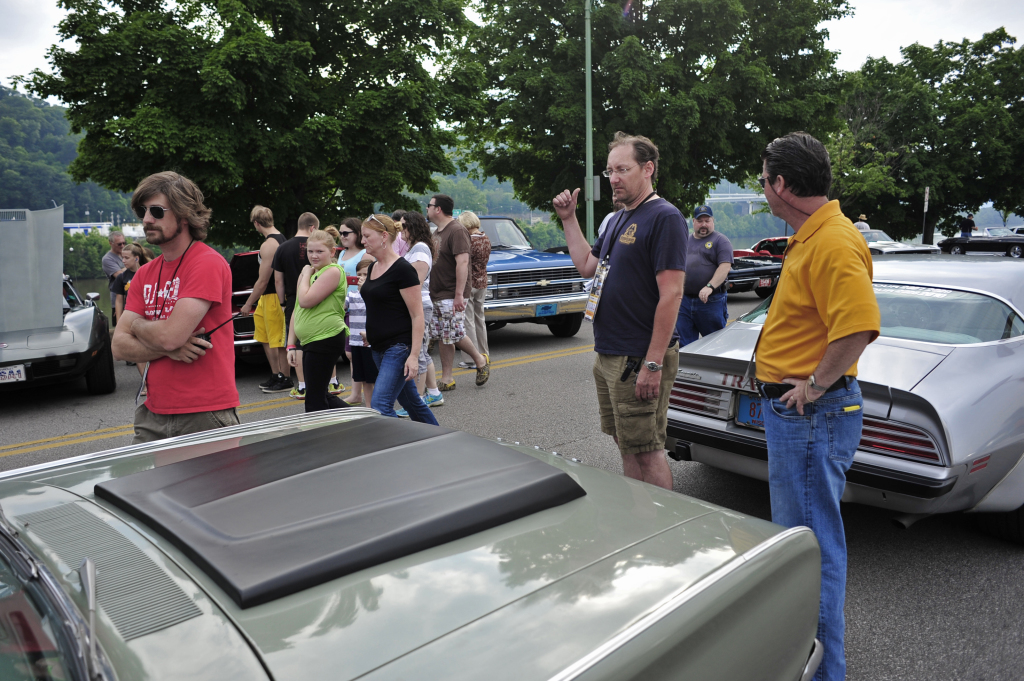 Jim’s disdain for the Charger is almost palpable. Meanwhile, your humble correspondent attempts to hitchhike to the time stamp table. Mr. Black stays true to his program. 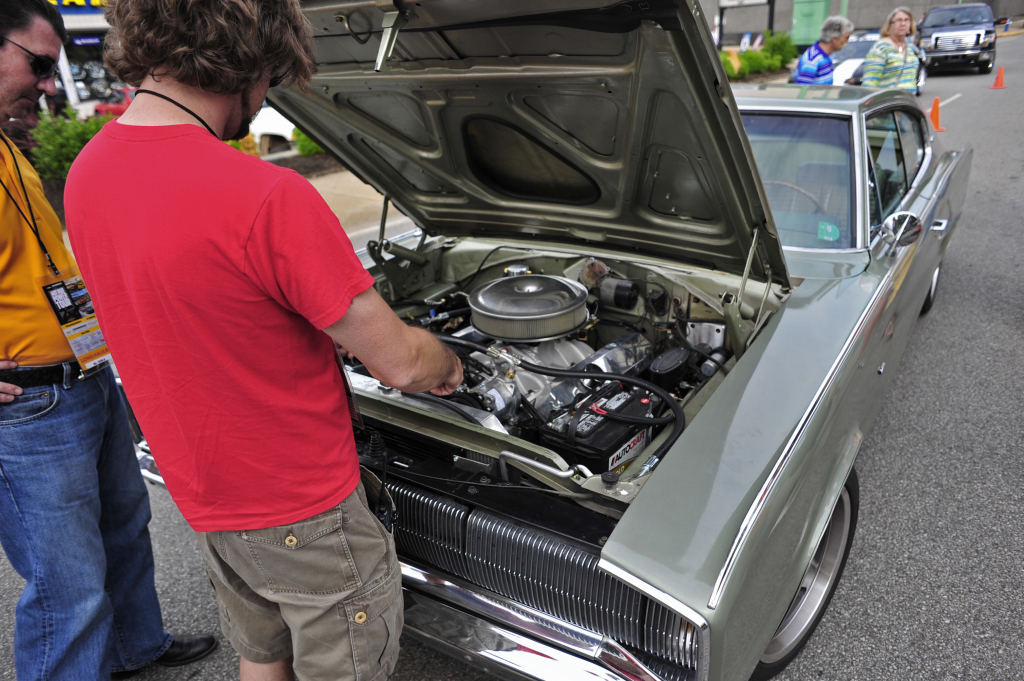 It was nearly seven o’clock as we made our way to the clocks. That’s almost an hour beyond the official closing of the time stamp window. Our pace was quick and we didn’t have time to gawk at cars or dilly dally. Was it already too late? Would all this strenuous speed-walking be in vain? 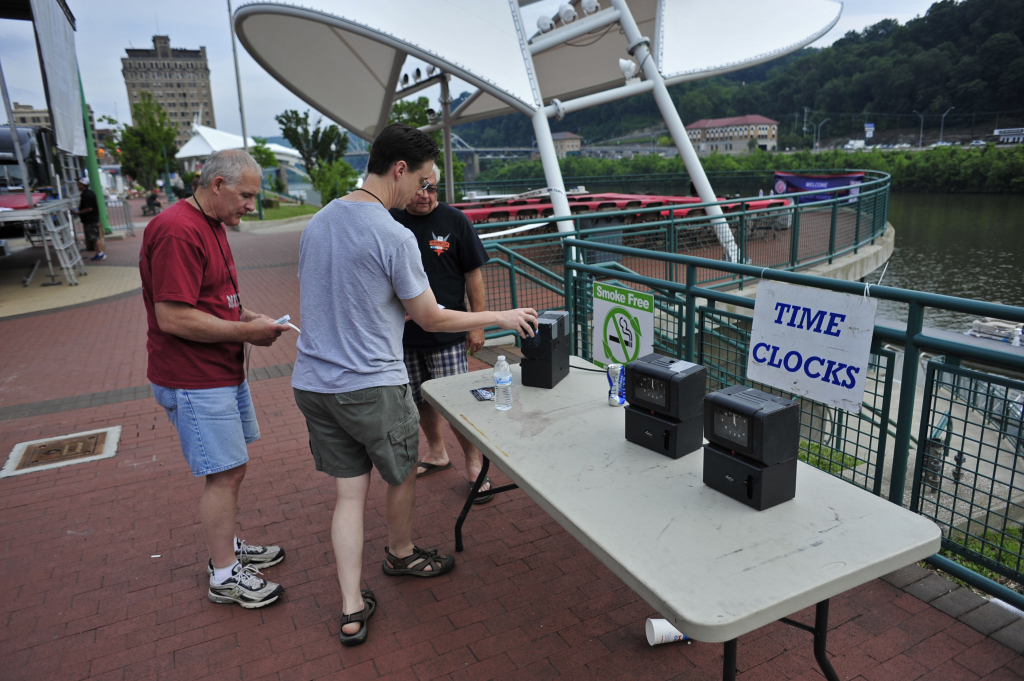 Tim and two other wretched stragglers punch their credentials at the last freaking minute.

Tune in next time for a culmination of the Charger/Camaro drama and more good times on the way to Norwalk, OH.

That was a very frustrating day. The part where we somehow drove past each other, and I burned up an extra 60 miles or so was especially sweet. It’s also the day I was really flogging the charger up and down those mountain highways, and even as an oil burner that sumbitch hauled some ass.

Yeah, I still don’t know how we missed the plume of blue smoke wafting from the opposite lanes. But then you still beat us to the venue in Charleston.

My only guess is that it happened when we pulled into that small road/driveway to cool the Camaro. Who knows? Can we get satellite phones next time?