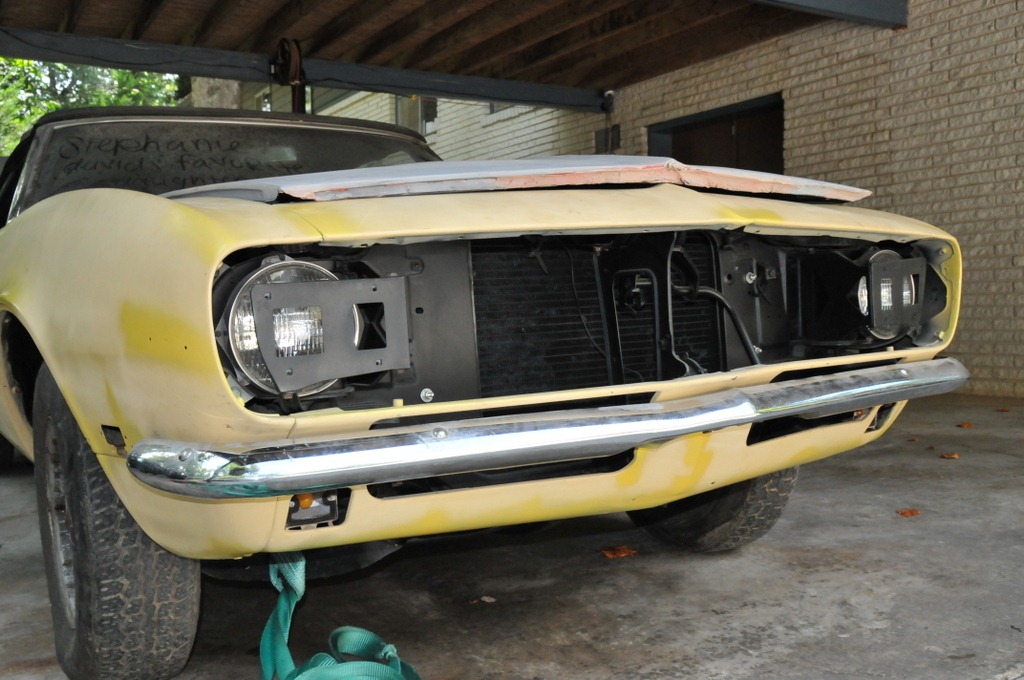 So, Michel’s new Camaro showed up this morning.

Let’s back up – Michel used to own a 1966 Mustang convertible. Cute little car – I6, auto, convertible in Tahoe Turquoise with a black interior. Very nicely restored, and a fun little ride. He ended up selling it on a few years ago, when the time was right. He’s been pining for another old car ever since, of course, and in the past year or so really settled on a 1968 Camaro as his next classic. So, the search was on. After perusing eBay, craigslist, live auction sites and every other source of jalopy Chevy’s, he found a few he liked, and even made some tentative moves toward purchasing.

He wanted a project, but not a BIG project. He wanted a classic, but not a concours restored car – he wants to put his own touches on the car, so a concours car would be a waste of money. He also didn’t want to spend years building the thing – tinkering is fun, but only when balanced with actually driving.

So, he found this car listed on eBay, and called the owner. After some phone conversations and emails with the owner, and much consultation with his advisor (me), he and I ended up driving 3 hours or so to somewhere in Alabama to go look at this car. It was parked in the guy’s basement, along with 4 1967 Camaros in various states of repair – all solid, but only one looking like it might drive itself out of there!

We spent an hour and a half looking the car over, asking questions, and discussing. After a quick private chat, we went back in and offered the guy a cash price for the car. Literal cash, in a paper sack. He (with a pained look on his face) turned the deal down, and we departed. Michel and I strategized a bit in the car on the way back, and agreed that Michel would call the guy back in the evening, make a 2nd, slightly higher offer that we figured he’d take, but it had to include the 2nd console with gauge cluster the guy had, and he would have to deliver the car to Atlanta for us. 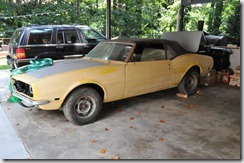 Fast forward to today, and it’s here. For some reason, the guy was here at 7:30 in the morning. We’re still trying to figure that out… Did he leave at 3am? Did he drive all night and stay in a hotel? Why did he have his wife and daughter with him at that hour, are they all nuts? Anyhow, Michel paid for the car (the wife took the $, natch), they unloaded, and now it’s in my carport. 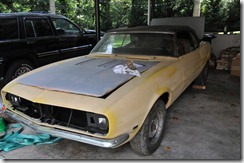 I made it home from the office early, and we spent a few hours combing over the car. 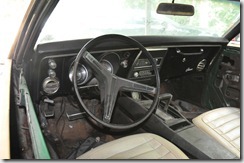 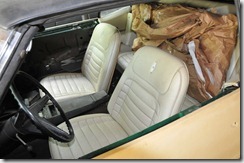 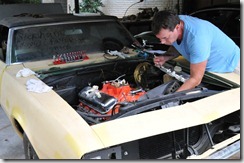 Nor is the hood actually attached in any way. Convenient for working on it. 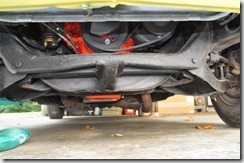 We went ahead and removed the stock intake manifold, in preparation for the new setup – a swap to a more modern aluminum intake sporting a new Holley carb. The engine was supposedly rebuilt in the past year or so, but never fired. We’ll just see about that. Apparently the guy we got it from bought it from someone that started a restoration – by pulling the motor and painting the engine compartment… So this guy did some level of rebuild on the motor, and put it back, along with a rebuild of the transmission. Hopefully within a couple of weeks, we’ll know if / how well they both actually work. 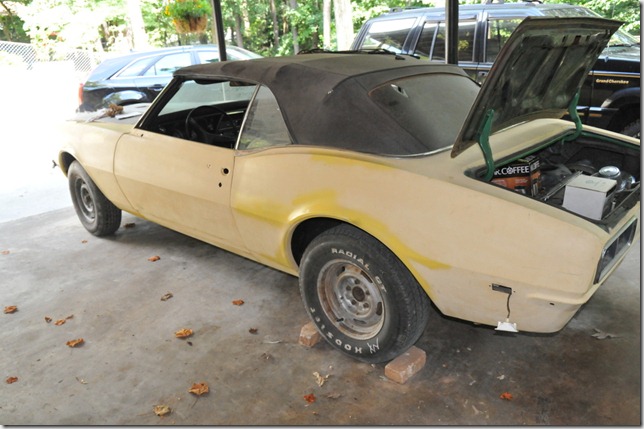 Oh, yeah. the door handles, door locks, trunk and hood latches are all missing. Terrific! The only non-factory sheet metal parts appear to be the trunk lid, passenger door skin and the front top nose panel. But no rust to speak of. Some pinholes in the passenger rear footwell (convertible!), and that’s really it. The body is not our concern here. Missing engine compartment wiring, perhaps. The dismal 4 wheel (power!) drum brakes, for sure. But rust is not our concern!

Check back, good people of the internet, and see just how this thing ends up! We want it off to paint before the end of August. Preferably by the middle of August. But it’s all predicated on making it move under its own power… 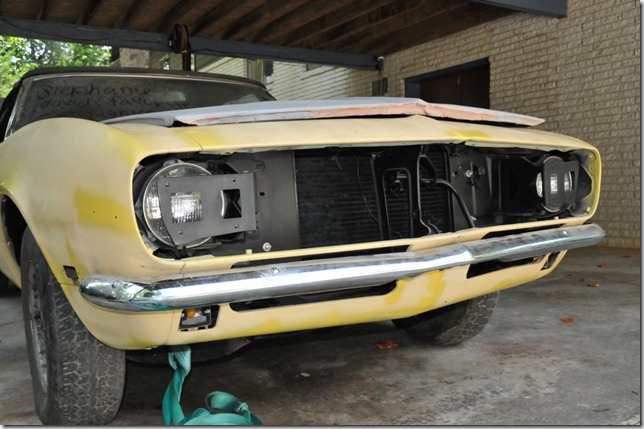 Genesis: The Judge, the Power Tour and a Plan Pt. 5