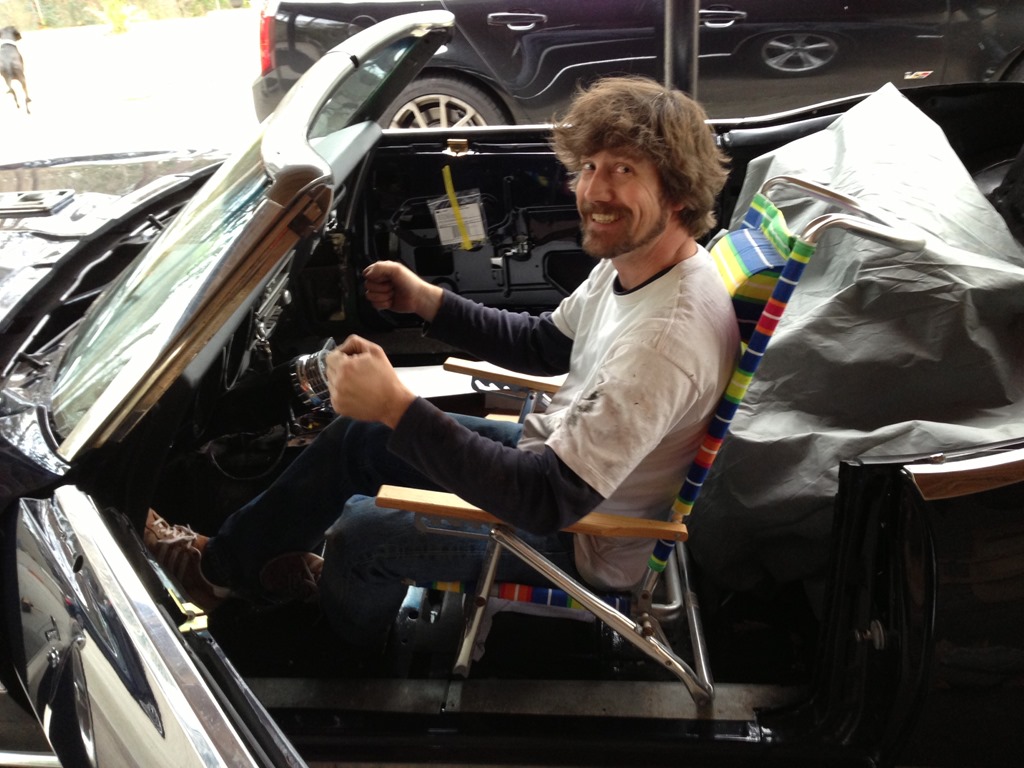 In which Progress is made on the Camaro.

Hello, good people of Internet Town! Welcome to the latest and most greatest installment of “When Will That Camaro Be Done!”

Since we last communicated, many things have happened. Seriously. Many. Lots of stuff. Got the drivers side power window lifts installed, and all the wiring run. Need to bolt in the passenger side lift motors, but that’s a pretty simple job. I’m really glad we chose to add an auxiliary fuse block for all of the new “stuff,” it makes adding things like these window motors and the electric conversion for the RS headlamp doors that much easier to do.

Did I forget to mention those? Well, we ditched the vacuum setup for the headlamp doors, and went with the electric conversion from Detroit Speed. We’ve installed a LOT of new parts for this car, all supposedly designed just for the first gen Camaro. So far, I’d say this is the best engineered of the batch – it just worked. All the wiring was the correct length, the instructions were clear, and the thing just functions. Amazing. 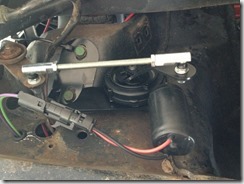 So, as part of the… whatever it is we’re doing to this car, we’ve also moved the battery to the trunk. Used the billet aluminum clamp setup from Aerospace Components, and bolted it in place. Looks good, and moves a bit of weight rearward, never a bad thing with these cars. 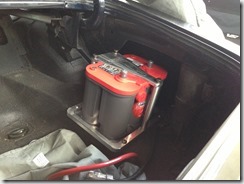 Got the cluster installed, another pretty nice bit of kit. Seems well thought out, and it does seem to work well, except for the oil pressure sender which seems kerflooey. Have to call Dakota Digital and see what they suggest, I suppose. 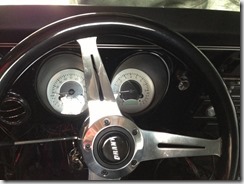 Got the brake system bled, and it was of course leaking from every joint until we went through and snugged them up – such is life when every single part is new in the system, so this wasn’t that big a deal. Now hopefully they function!

I got Michel to order up another exhaust system – this time the Summit Racing brand dual 2.5” mandrel bent system meant for the Camaro. Using the front pipes and mufflers from that system, a set of 3.5 to 2.5 reducers, a bit of time, and my crappy welding skills, we now have most of an exhaust system. Need to figure out what we can do with the tailpipes…. The SpeedTech rear suspension system rules out the normal routing for tailpipes, so we need to find someone that can fab up some pipes for us… Hmmm.

Basically, we’ve been going around and around the car, just doing “stuff”… It all has to be done, so we bite it off as we see it. Noticed 2 missing washers on a bolt on the rear suspension – putting those on took 45 minutes, because we had to support the chassis of the car to unload the rear axle to… You get the point. It’s all just painstaking.

The good news is, I got to sit in the car! Pretty comfy, really. 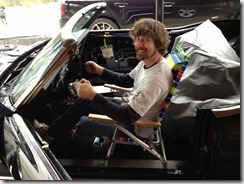 We naturally couldn’t actually use that beach chair, it was too wide. So we replaced it with a steel washtub (and bolted on the steering wheel) for THIS little exercise:

Yeah, what the hell is with that? The only thing I can think of is a clogged vent tube, combined with the torque converter leaking down internally from sitting for so long, and the wildly variable temperatures of an Atlanta Winter – from 25 degrees to 55 in a day, back and forth. Anyhow, once we topped it off, it drove out and back fine. Of course, once we got it out in the driveway, it barfed out a couple of pints of fluid, back out the dipstick tube. Mystery. A glorious, fantastical and not-at-all-annoying mystery. I’ll figure it out.