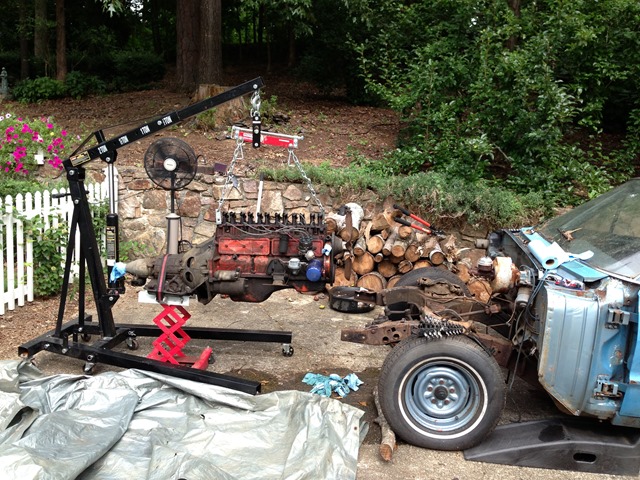 Things are skipping along at a feverish pace!  It’s been a mere 9 months since my last post and I’ve done a little more work on the old Wide Ride.  9 months?  Really?  Seems like about 3 weeks.  Durn. I could offer excuses, but I don’t think even I would whole heartedly buy into their validity.

With their completion of the 2013 Hot Rod Power Tour, Jim and Bill are all full of piss and vinegar for some sort of convoy for 2014.  That means I’ve been on the receiving end of a fair amount of needling, cajoling, encouragement, and insults.  I’m fine with that.  Having the Rider ready for 2000 miles worth of driving by next June seems like a long shot to me but hey, goals are important.  So, then…onward…

I finished up removing all of the exterior trim.  When I removed one of the tail light bezels, I disturbed a colony of ants that had apparently set up shop therein.  Neat.  It was probably less of a shock that the family of possums I once had to chase out of the engine compartment. 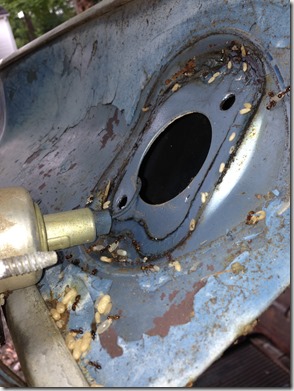 I removed the interior door panels which were, as you can see, slightly the worse for wear.  A quick examination of the door interiors revealed pretty solid metal.  This is mildly surprising, but welcome.  I removed the door top rails which were again in surprisingly good shape for being fifty years old, gave them a coat of Rust Bullet, and sent them off to be remanufactured into replacement panels. 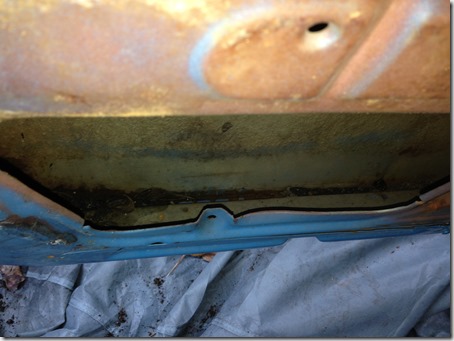 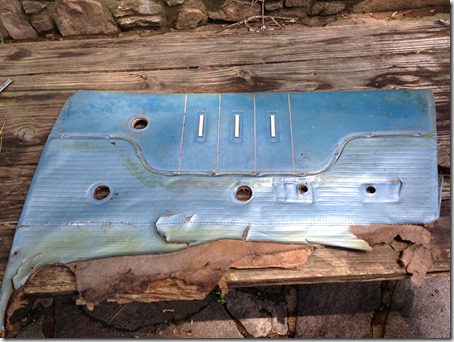 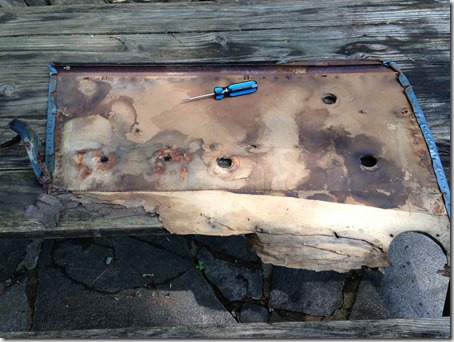 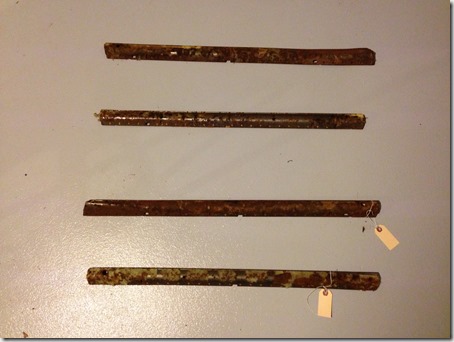 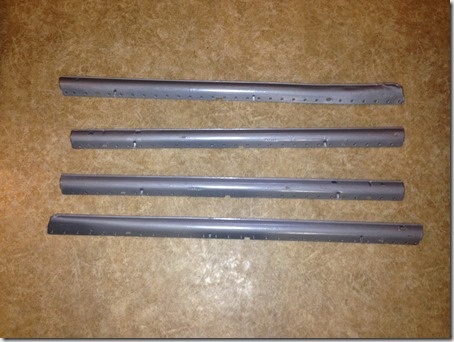 Next step: pull the old 230 and Power Glide.  The first part of that process was to get the car on some relatively level ground instead of the 10 degree slope on which it had been sitting for years.  For this, I must once again thank my ol’ pal Dave.  It turns out that one Nissan Titan + Some Wooden Redneck Bumpers + 270 lbs of human = auto movement. 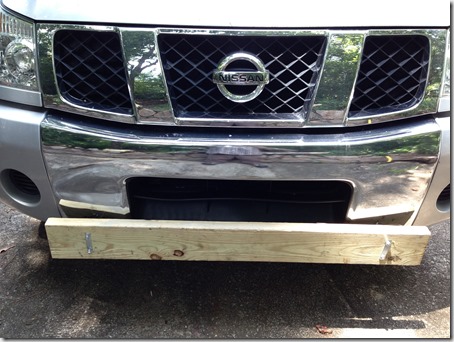 I guess I didn’t take a picture of the one I built for the Rider, which is a shame because it was basically a window header bolted onto the frame. 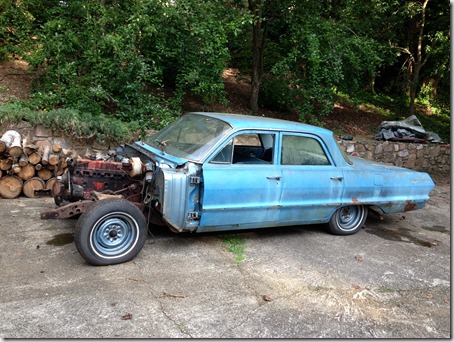 I drained the oil and then dropped the transmission pan to drain it as well.  Umm…gross.  I guess some water got in there at some point.  Good thing I won’t be using the PowerGlide and its fabulous 1.76 first gear any longer. 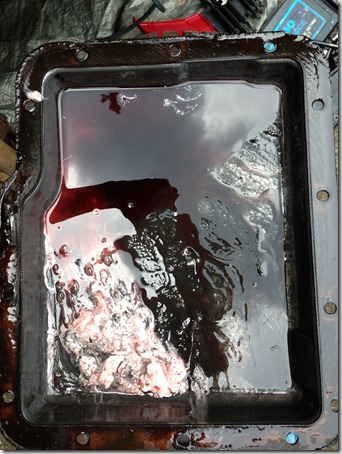 Next, I removed the U bolts from the rear drive shaft universal joint, unbolted the carrier bearing and pulled out the whole shaft.  When the carrier bearing cleared the frame tunnel, it hilariously and completely disintegrated.  I wonder how long its been like that? 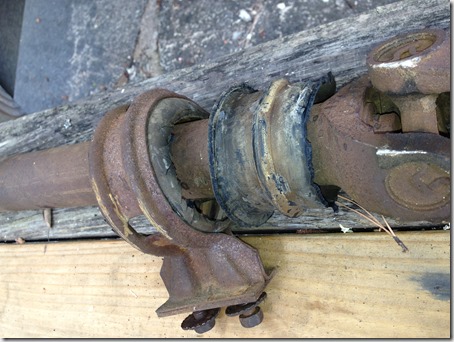 I removed the engine mount tower bolts (slightly tricky), fastened the lift balancer to the engine via a couple of head bolts, and started lifting.  I frankly expected something to go horribly wrong at this point, but the old 230 came right up.  A little tweaking of the balancer and pretty soon the whole assembly was dangling in front of the car like an Aztec sacrifice being shown his own beating heart.

Possibly less dramatic than that. 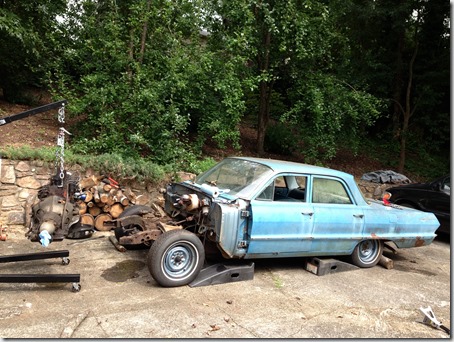 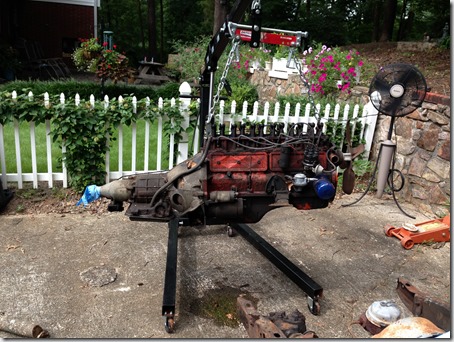 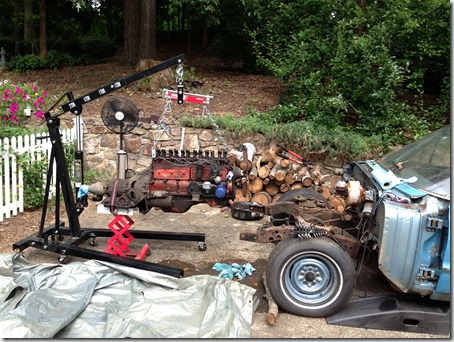 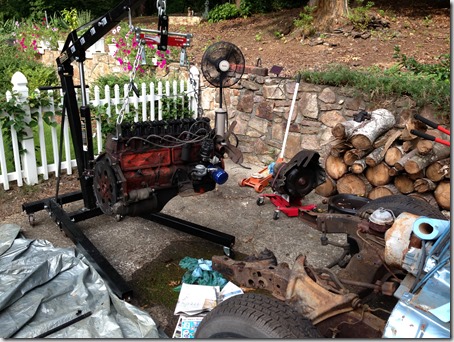 Soon, the Rider will be taking a trip to a local shop that specializes in LS conversions for a little fitment check.  They need the front back on so…

This looks pretty roomy.  350 HP should fit in there fine! 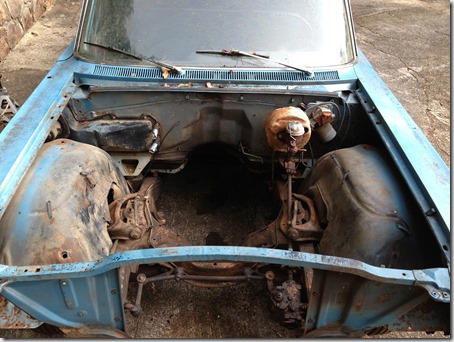 This is sacred, holy work, old monk! And YOU are the right mandinga for the job! I hear “Hot for Teacher,” and it’s getting louder…

Zim zam zoom, you’ll be done before you know it… As long as your definition of “done” has some flexibility.

And, oh, I expect it to be closer to 2300 miles, more if we get lost, or creative on our routing!

He’s right about this. 80% done could quite possibly done. #clunk!

Pretty soon you could drive it in the Youth Day Parade!

How do you cook it?

Exciting development! With the guidance of the LS guys you should have Wide Ride rolling in no time!