At the conclusion of the last post, I indicated the rear end for this project would  soon be addressed…  A  3.42 Limited-Slip set-up.  This is in the works and shall be addressed, in detail, in a future post.

My current and immediate focus is directed to the engine portion of this project…  When my car rolled off the assembly line, it was equipped with a less than impressive 350 C.I. mill.  1972 was pretty much the end of the run for performance at GM…  The stock 350 in my car was a far cry from being a performer.  Skyrocketing insurance premiums and soaring fuel prices had GM scurrying to please the government with tamer, less intimidating V8 power plants.  I inherited a vehicle with potential.  From the moment I purchased this ride, the goal was to wring as much out of the old Rocket 350 as I could.  HEI, Dual 2.5″ exhaust with a cross over and turbos, K&N breathing apparatus, MSD 6AL setup, a shift kit for the transmission, mods to the Q-Jet…  All of this certainly helped.  She’s been a fun car.  The ol’ engine has hung in there…  It’s an Olds.  This is what Olds V8 engines do.  Now is not a time to be sentimental, however.  A quest for performance is in full swing.  The saying, “There is no replacement for displacement” defines my quest.

In 1968 Oldsmobile began production of their 455 C.I. V8 engine.  Production of this engine ended in 1976, with a couple extra years of manufacture for power equipment.  In its most potent stock form, this engine boasted 400 HP / 500 TORQUE numbers.  Hence, I am performing a swap…  My car shall have a 455, thank you.

First things first…  I had to find a good platform on which to build this engine.  back in November I participated in a cruise with the regional Oldsmobile club.  Met some great guys, Olds geeks all.  One of the guys I met was a dude by the name of Rene Garza…  we talked about my project, he gave me a business card and told me to get in touch, if I needed any parts.  At the mid point of this month (January) I purchased a short block assembly from him.  This will be the basis for my engine build.

Building an engine – more specifically, a performance engine is a no bullshit endeavor.  I had entertained the possibility of retaining the engine building services of a legendary speed shop in Arlington, Texas…  made the same consideration with another in Dallas…  yet another in Memphis TN.  Damn good thing I didn’t.  Through the online phenomenon, ClassicOldsmobile.com,  I was referred to another dude, Danny Sarvis, a well-known and respected Oldsmobile guy, racer, and engine builder… Oldsmobile engine builder, to be exact.  When building and assembling an Oldsmobile engine, it is critical the project follows Olds-specific tech guidelines.  Anything to the contrary taunts failure.  So, I’m in good hands.  Danny is a one man show, with years of experience and the accompanying expertise…   He cares… My engine will be bad ass.

Back to the mid January engine purchase…  Rene had a previous Olds relationship with Danny.  So…  Rene  loaded the short block into his truck, drove up from the Rio Grande valley to San Antonio, where the three of us met at Danny’s shop.  Danny has the engine and will disassemble it to determine the state of the internals.  Then it will receive any needed machining, prior to adding all the goodies.  Here are a couple sneak peek photos of the engine, as it sits in Danny’s shop – still wrapped for transport: 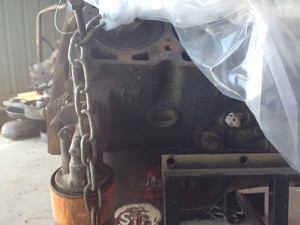 The photos above reveal some specifics about my engine…

The block is an F … The serif on the letter means it is a ’70-‘72.  (an F – sans serif – would denote ’68-’70)  Most interesting is it is a marine engine block!  This fact is found in the characters on the VIN derivative pad – front driver’s side: L3E 31267.  The first character, “L” denotes a marine application.  Olds 455 engines are oft-time found in speed boats, desired for their torque numbers…  In these years, cylinder head castings on marine engines were G. G heads are somewhat desirable and Rene harvested them from this mill for a project.  Rene pulled the engine from a ’69 442.

So…  Some dude had a ’69 442.  At some point he replaced the engine (or had it replaced.)  The chosen block happens to be a newer (not ’69) and reliable marine 455.  Considering the current internals, .030 bore, 4-speed crank, etc., it is difficult to say exactly how the marine block transformed and made its way into a 442.  Forty five years ago the ’69 442 rolled off an assembly line…  A LOT can happen to a muscle car and a separate engine in that time span.

My engine has a story…  a history.  Some of the details are missing, but a colorful story nonetheless.  A new chapter begins with the short block, my  game plan,  Danny’s expertise and wrenches, the fact money will be spent, and…  anticipation.  Stay tuned…

Whatever happened to that Duster, anyway? Pt. 1

Our friend Ralph and his '72 Olds.

Well, thank you for sticking with an Olds powerplant. The easy (and probably cheaper!) option these days is a boring and dependable chevy LSx swap, for everything…

What are you going to do for heads? Cam? Have you considered cutting 2 rows of holes in the hood and running zoomies?

Jim… It was never an option to go with a chebby. Glad you appreciate my purist approach. Powerplant will receive Edelbrock Performer RPM heads. Cam will be from a small company named Bullet (formerly Ultradyne) – Specs to be revealed at a later date. No zoomies… Hooker Competition headers through Flowmaster 40 series. This is a complete re-build. Bullet proof and bad ass.

Very exciting. I too am glad you stuck with an Olds engine. I especially like the STP sticker on the oil pan.

Bill… The Olds engine is a beast. And yes, some doofus applied an STP sticker to the oil pan, along with a SUMMIT sticker too. The 5 QT. stock oil pan will be upgraded to a 7 QT MILODON. The build will be photo documented, to the best of my ability.