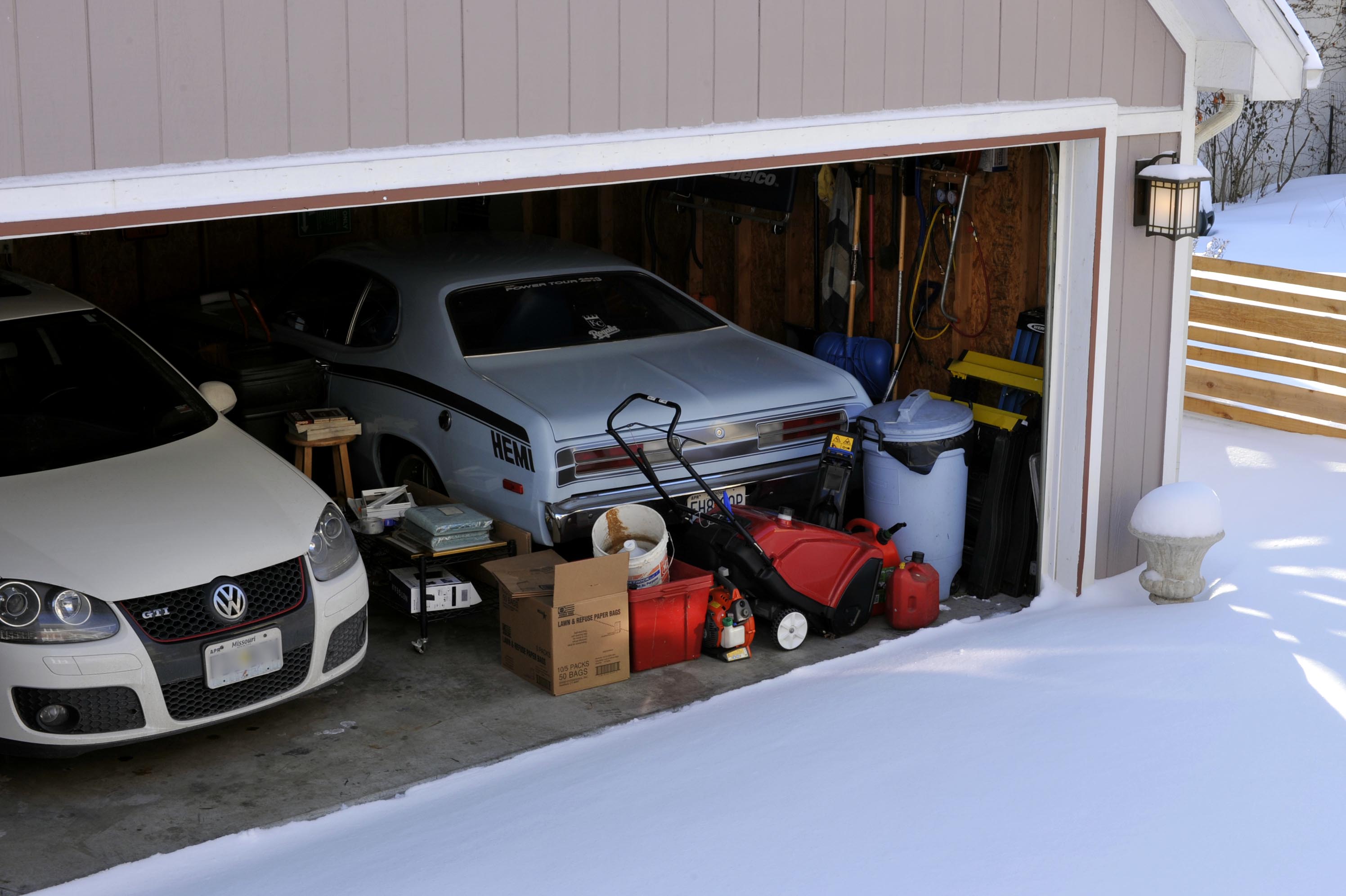 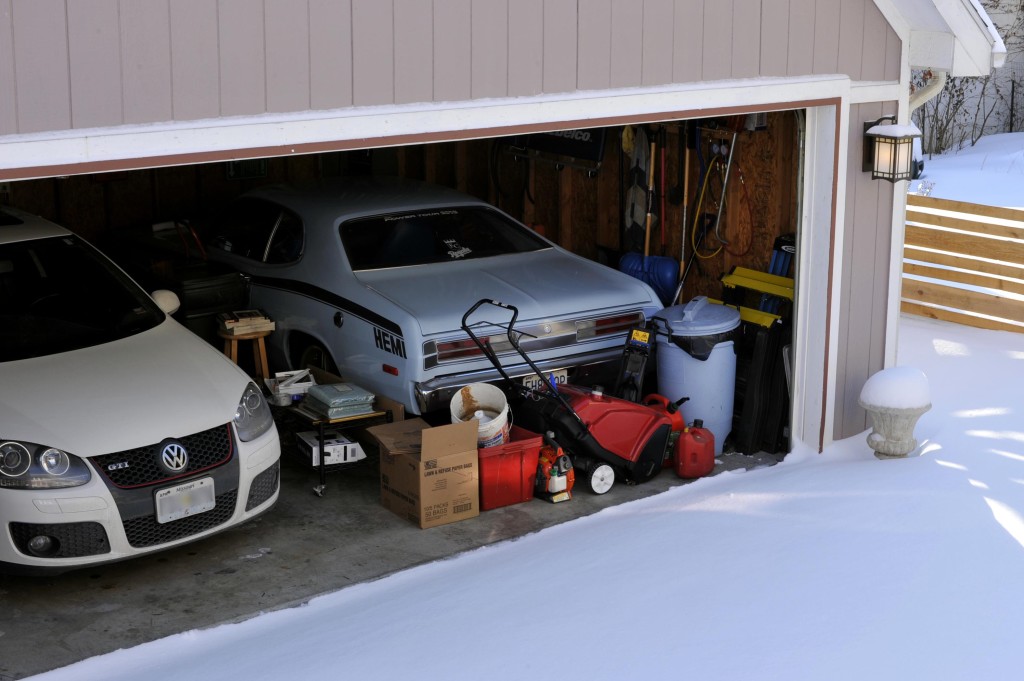 Everybody’s favorite Duster is officially confined to the garage until spring, which leaves me plenty of time
to address a few things before the dash to North Carolina in June.

Like most of the country, Kansas City was blanketed by snow last week. Ten inches deep, or so. The shit is everywhere. In fact, as your humble blogger crafts this post, the white stuff is falling from the sky once again.

That reminds me. Does anybody remember the hilarious scene in Atlanta a couple weeks ago when a whopping two or three inches of the devil white stuff fell upon their insane streets? All hell broke loose. The highways were clogged with cars sporting high performance summer radials and 24″ donks unable to move an inch. The first thing the brilliant Atlanta drivers did was try to hustle past the stuck chumps by blasting down the shoulders. Hey, it works during rush hour, so why not during Snowmageddon, right? Soon they were immobilized, as well, with the added benefit of blocking emergency vehicles! 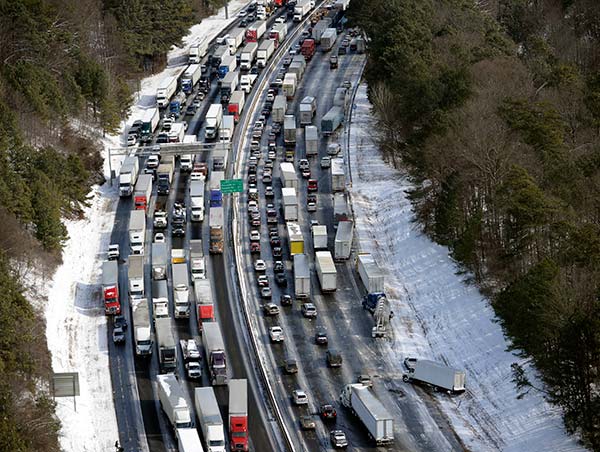 Atlanta fancies itself a world-class city. This blogger suspects otherwise.

Sure, it’s fun to make fun of Atlanta drivers but let’s not forget about the brilliant Mayor and city managers, as well as the Governor of Georgia, who botched the handling of a couple inches of snow. Again.

Fellow blogger, Jim, wisely chose to not take part in the mayhem unfolding on the streets of his dear city. Instead he chose to focus on the mayhem on his estate.

Out here in the Midwest, it takes more than a few inches of snow to hold us down. In fact, snow storms are a perfect time to go shopping for consumer electronics!

CB rejoices at the acquisition of a kick ass electronic item during our latest ten inch dusting.

With all that talk of snow out of the way, let’s turn our attention to the sunny days, the Duster, and the Power Tour. Namely the things I’d like to fix, change or otherwise fiddle with prior to the 2014 Hot Rod Power Tour.

First and foremost, I need to sort out the gas gauge situation. I have never been able to dial it in correctly and I have lost patience with not having a reliable fuel level reading. The odometer dictated my trips to the gas station all summer and I managed to run out gas once or twice. Yay. The Speed Hut gauges I chose look great and function as they should. I imagine there is nothing wrong with the fuel gauge so I’ll be turning my attention to the sending unit. Seems simple enough.

The thing I’m probably most excited about is the steering wheel. While I like the fact that the original steering wheel is blue and matches the interior, it’s a little too large in diameter and like most steering wheels of that vintage, really skinny. CB, pictured above, was nice enough to buy me a Grant reproduction of the old Mopar Tuff Wheel for Christmas. She even ponied up the dough for the leather version! Unfortunately, I don’t have it yet because they are back ordered. Hopefully it will appear before June.

Then there’s the exhaust. Loyal readers surely know that the Duster is a little on the loud side. Don’t get me wrong. I love the exhaust note and even the volume in smaller doses. It’s great for cruising around town, scaring pedestrians and setting off car alarms. During long trips, however, I must admit that it wears on me. I guess I’m just too old for that shit.

I’ve decided that adding electric exhaust cutouts and a complete exhaust system that exits at the rear are the solution to my problem. I’ll keep the cool NASCAR side exits intact make the rear ones as discreet as possible. I met a kid at the Longbranch Friday night cruise in Overland Park, KS last summer who used a pair of DMH cutouts and was pleased. They seem like a good design and I may end up using them but I’ll do some research before making my final decision. While I look forward to quieting the car, I’m a little nervous that without the deafening exhaust noise I’ll be able to hear all manner of squeaks and rattles. After all, we are talking about a ’72 Duster here.

I went into some detail about the final item on my list in my last post. To review, I’m going to add some more dampening to the car. I have already installed Hush Mat on the firewall and floorboards to the back seats. I figure adding some to the quarter panels,  doors, trunk and roof will add more noise control and maybe give the body a more solid feel.

So that’s that. Jim hasn’t even started to install the RMS front end on his Charger (there are unsubstantiated rumors that work has begun on the rear suspension) and Ralph just started building his engine. And God only knows what the hell Tim is doing with Grandpa’s Impala.  I look forward to spending my late winter/early spring focusing mostly on luxury and style.

Our friend Ralph and his '72 Olds.

Great post. The video of Jim hittin’ the slopes with his pups, led me to watching some time lapse documentation of his suspension work. Cool. Best wishes to you with the fuel gauge issue… Mine is fucked too… Hope it is just a ground issue with the sending unit wire. I haven’t run out of fuel yet. It’s just a matter of time. Dig the Grant steering wheel. Keep us posted with regard to your exhaust mods… Luxury and style… Geez, must be nice! June looms…