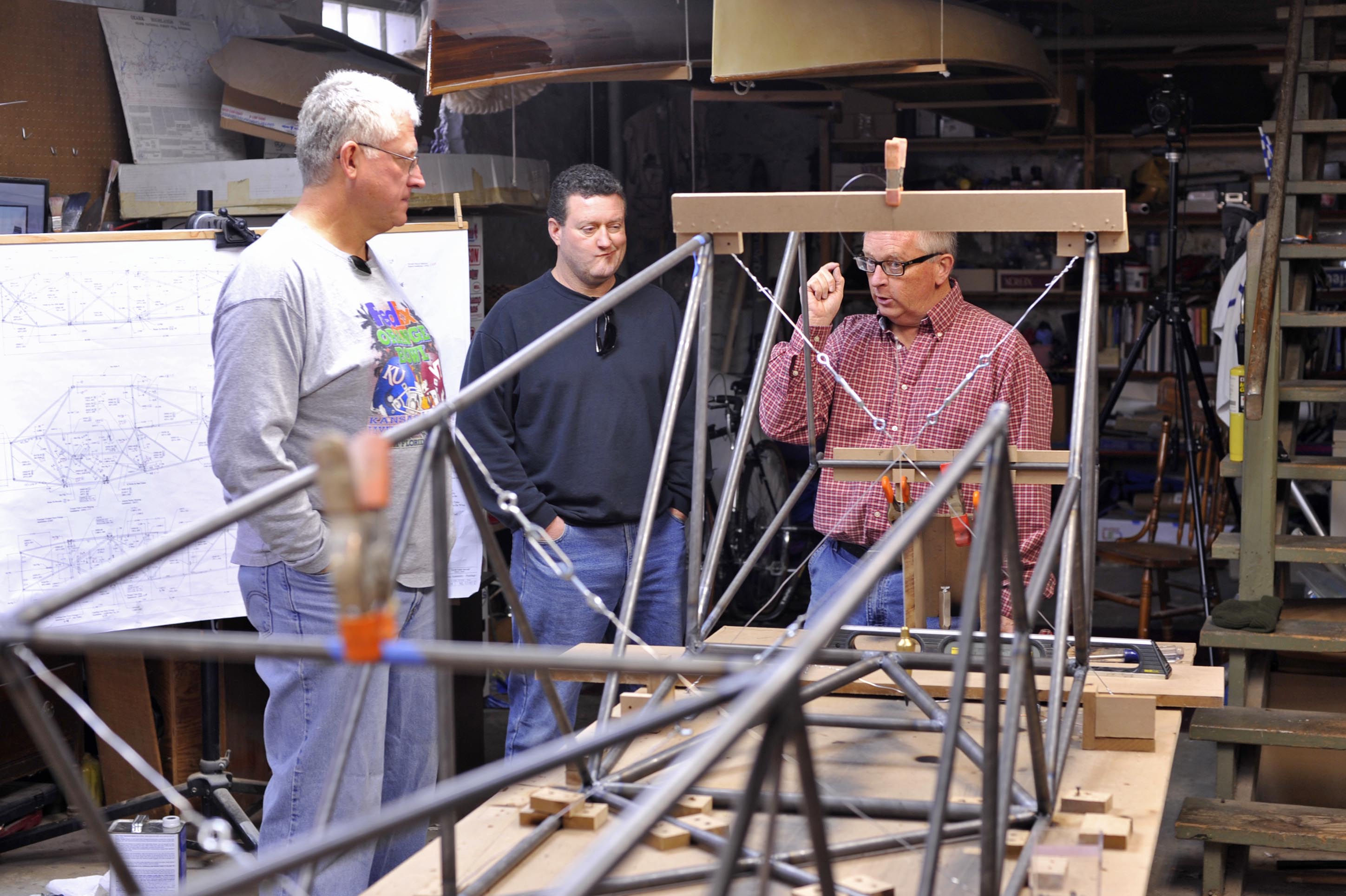 Our friend Gary is building an airplane in his basement. 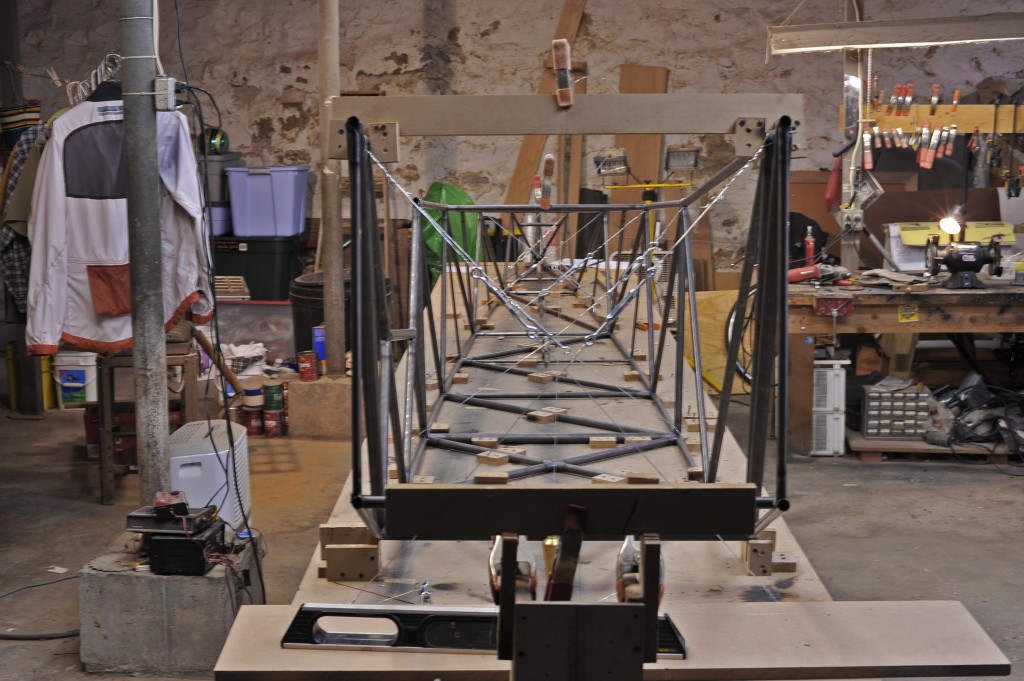 What you see here is the beginnings of an honest to God flying machine! A Piper Cub, to be exact. As in any respectable airplane factory, one will find laundry hanging among assorted containers, tools and bits of wood.

While the rest of us here are fiddling with automobile projects, our friend Gary is building a Piper Cub airplane in his basement. He’s told me on several occasions that cars are more complicated than airplanes. But here’s the thing, when I started the Duster project I had, well, a Duster. And Jim is starting with a Charger. Tim has his grandpa’s Impala and Ralph has an Olds. Gary is starting with $1000 worth of tubing, a welder and a stack of plans. Painfully technical plans. They make my head spin.

The black and white photo to the left of that diagram is of Gary’s Dad in his workshop. He’s no longer with us but this blogger suspects he watching over this project from somewhere and grinning like an idiot.

Gary has spent the last few weeks cutting up bits of tube and arranging them on a jig he built for spot welding. The result is a thing that vaguely resembles a fuselage. In exchange for a cheeseburger from the Westport Flea Market, I agreed to help him make some crucial bends. I was not the only one who chose to take part in this project. In fact, I was a latecomer due to the fact that Jeff and Richard had agreed to help out before I was a part of things. Those two were a big part of Gary’s Factory Five Cobra spec racing experience, by the way, but that’s a different story. 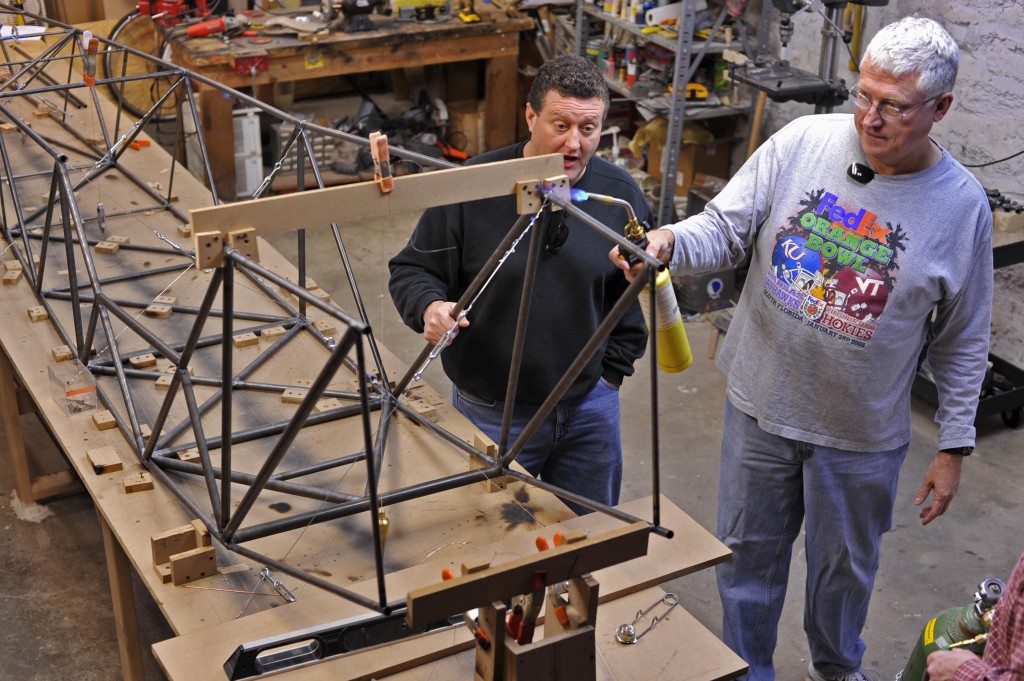 It seems Jeff believes enough heat has been applied but Richard soldiers on.

Turns out, some of the tubes that Gary has so carefully welded into place need some heat and some bending in order to match the aforementioned plans. That’s where the crew stepped in to help. The day will come when Gary fires this thing up and heads skyward. It pleases me to know that some hungry dudes with torches and muscles took part in making it all come together. I plan to ride in this craft someday. Gary has ridden in the Duster so it only seems fair. 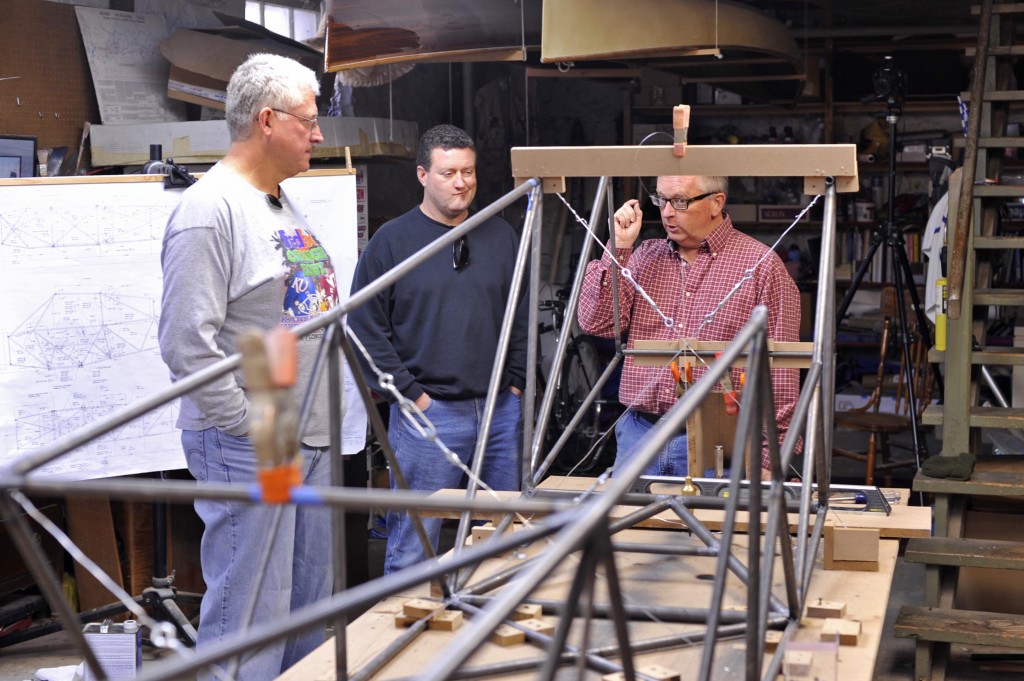 Gary makes an important point about the task ahead while his helpers think about cheeseburgers.

Heat and pressure were applied with varying intensities and the bits that needed bending were bent to perfection. Or to use an aeronautical term, “close enough”. With that out of the way Gary can now move forward with more tubes and more welding. Before long, he’ll be able to pull this skeletal gem from it’s constraints for final welding. This blogger is confident he’ll be stacking dimes. 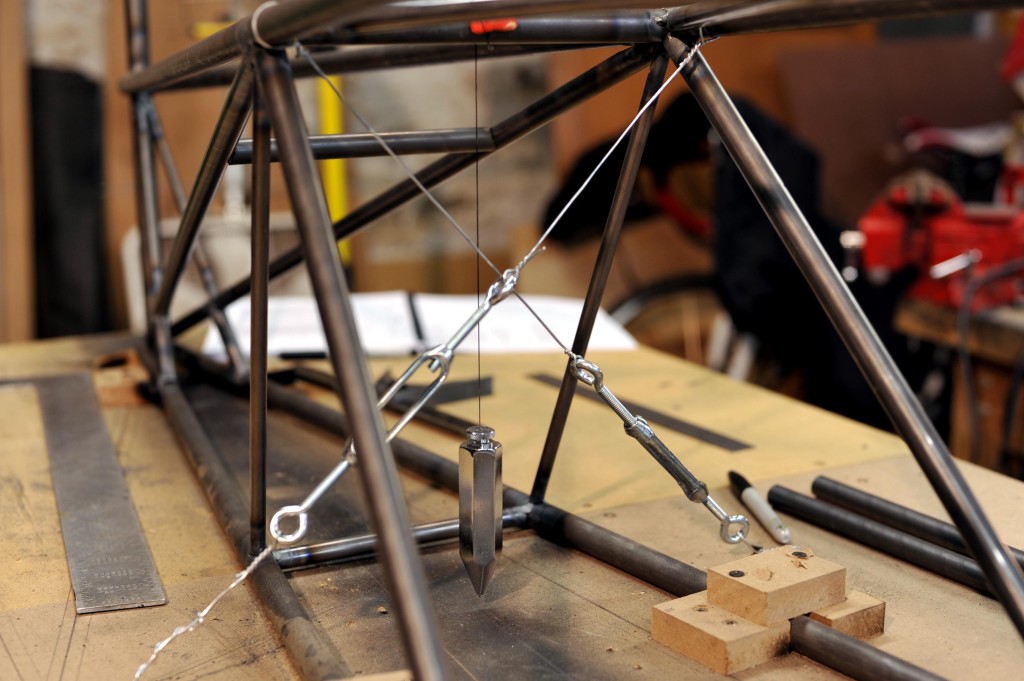 As you might expect, building an airplane requires lots and lots of finicky measuring, center lines and doohickeys.

I will be following up on his progress here from time to time as Gary’s Piper Cub project moves forward. Hopefully He’ll chime in with whatever details he sees fit to share, as my plebeian coverage will likely raise more questions than it provides answers.

Great coverage! Some of the BIG words I hadda look up – like doohickey. Funny, it had nothing to do with doo.?
But seriously wish I could be part of this project so I could earn my Rosie the Riveter badge.