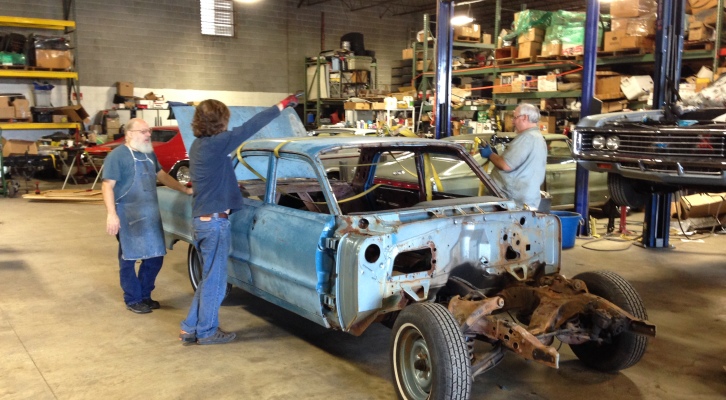 Greetings and salutations, random internet persons.  It’s so good to see you!  Really…you look GREAT!  Haven’t changed one bit.  How is it that I keep getting older and you just stay still?  Merciful heavens, it’s amazing.   We should catch up sometime, you know?  It’s been so long since we had a real chat and I’ve got like probably two or three very mildly interesting things to let you in on.  Tell you what, grab yourself a tasty beverage of choice and we’ll have a little sit down.  Sound good?  Right!

You know I’ve got this old car that I’ve been ‘working on’ forever, right? Yeah, yeah…that one…yeah…yeah, still working on it.  Thing is, I took it to this body shop so that the body shop dude and his crew of lesser body shop dudes could work their magic on first the frame and then the body.  I was supposed to be bolting on aftermarket parts in a matter of months if not weeks.  Sweet!  It turned out, though (and you’re not going to believe this), that the dude and his lesser dudes DIDN’T ACTUALLY DO WHAT THEY SAID THEY WOULD!  EVER!  Can you believe it?  Crazy stuff.  I mean…to be fair we did have an ice apocalypse (Cluster Flake) here in mighty Hothlanta that caused every single car in the metro area to need some kind of collision repair.  You know, I heard that people in Alabama and Tennessee wrecked their cars just by being exposed to news stories about our giant winter storm.  I mean…I don’t know if that’s true or not…I’m just saying…a guy told me that…Anyway, the storm made for a cool excuse for…I dunno…let’s just say 4 months after which I’m not really sure what the problem was.  After seeing absolutely no light at the end of that particular tunnel for 10 months, my good old buddy Jim arranged for a space to be made for the Wide Ride in the garage where he stores and fiddles with the Charger.  Jim…no…not Jim M, Jim C.  Right….yeah…beard…70s hair…you know.  Right.  Jim.  So, the great thing about being in this place is that help is abundant and, perhaps critically, Jim will be there to act as project manager, adviser, and general doer of things for the entire project.

OK, well, now then… What?  Oh yeah, we’ve done some stuff.  Basically, it’s gone down like this:  We spent some time just taking the car completely apart.  Dash stuff, seats, carpet, headliner windows, window guts (did you know they’re called ‘regulators’?), glass, and all the stainless trim.  Lord a mercy, let me tell you…taking that irreplaceable trim off will pucker you something fierce.   When we were done, things looked a little like this: 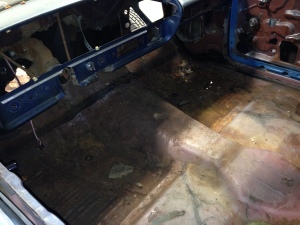 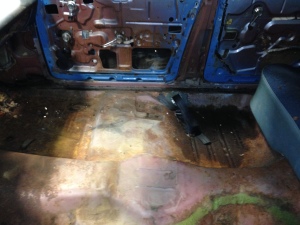 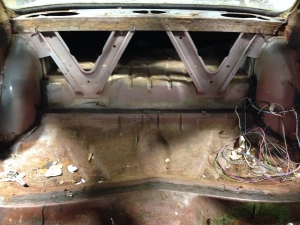 Yeah, well, I didn’t say it was really all that exciting…but it had to be done.  Oh, also, I built this crate to store glass in temporarily. I knew Jim would mock me for it and he did, but I think he secretly realized how awesome it was. 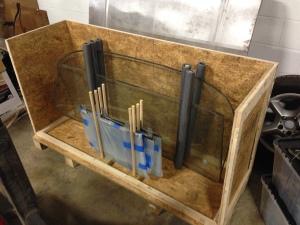 So finally…the big day comes.  It’s time to separate the body from the frame and mount it to a rotisserie.  Huge, HUGE, HUGE milestone for me.  So, the last stage in preparing for this event was to remove the 8 bolts holding the body to the frame.  7 of them came out beautifully.  The last one…well…not so much.  It was completely fused to the captive nut that held it in place, which was great for me, because it meant that I could spend the next 20 minutes lying on the floor, grinding off a bolt head with a die grinder.  What’s really cool is that it turned out I didn’t need to do anything because the entire box was rusted out.  It wouldn’t have mattered if that bolt was out or not.  It wasn’t actually attached to anything.  See that hole?  That’s not supposed to be there. 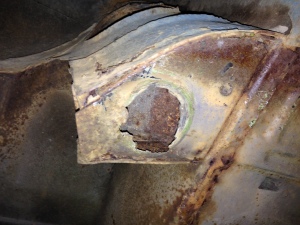 OK…time to separate.  Now, this particular shop is equipped with two, two post lifts, so in my dreams I had imagined the body of the ‘Rider being lifted majestically and elegantly from the frame. Perched on it’s lofty throne, the body would  wait serenely to be mated to the rotisserie.  Turns out, that was some more crazy thinkin’!  The BEST way to get that sucker apart was obviously to tie it to a forklift and go bananas.  Right…yes…forklift…well, there were straps so..well…it looked like this: 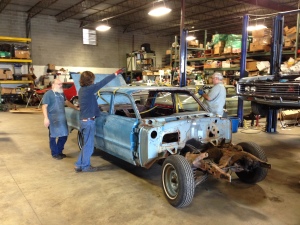 Jim explains how things are going to work. 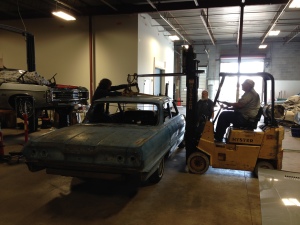 Yeah…right!  Pretty cool, huh? Yeah, well…it was cool to me.

Some shenanigans went down after that.  Chiefly, during what I thought was an attempt to unbind the as yet un-secured rotisserie, too much weight was added to said apparatus and both sides of the rotisserie flipped forward, smashing into the car.  Little true damage was done, but somewhere in a universe very close to this one, I have one leg.  Anyway when we were done, there was this! 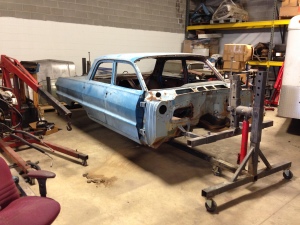 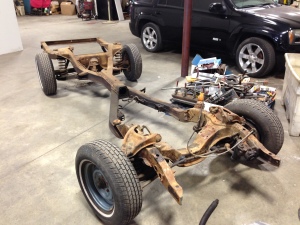 Hmm?  What’s that?  Oh yeah, there’s more, but I’ve got to let you go.  I’ve absolutely talked your ear off!  This has been fun! We should do it again soon!  Hey…next time I’ll tell you about welding on suspension parts!

The Judge attends the Art of the Car Concours!