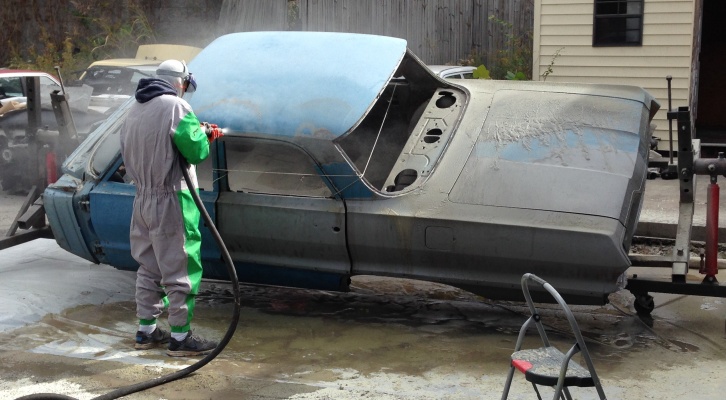 I hired a guy to wet blast my car. What happened next will blow your mind!

Welcome back, mildly interested reader. Our last installment saw the Rider completing a harrowing half mile journey to the paint and body shop. Once safely in its new temporary home, the next order of business was getting her stripped down to bare metal. Only then would all evils be cast into the light of day. Once exposed, unholy rust-outs, pinholes, and ancient Bondo would instead serve as a force for good, guiding and directing the cleansing power of the plasma cutter, MIG welder, and new sheet metal.

To this end, I sought the services of one Jon Culbert, AKA The Master Wet Blaster. Wet blasting or dustless blasting is a process in which crushed glass is used in conjunction with high pressure water to strip surfaces. It’s more effective and quicker than using grinders and since the media is suspended in water, you don’t get the clouds of dust that are a part of traditional media blasting. Also, since wet blasting is a mobile operation, I could save the anxiety of yet another trip on a roll-back.

Jim had originally contacted Jon about blasting my car as well as a ’56 Chevy pickup that was recently purchased by an automotive cohort. The ’56 project quickly changed hands and end state goals, however, leaving just The Rider to be blasted.

And so on the coldest day of the year since the end of last winter, Jon arrived, set up shop, and began to toil. 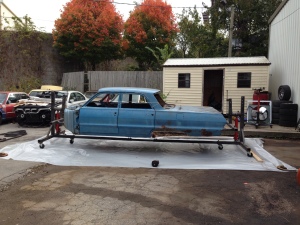 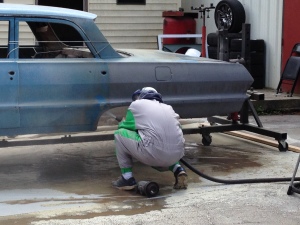 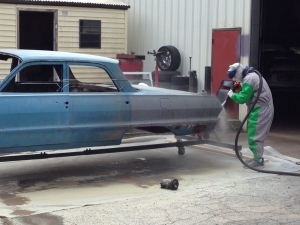 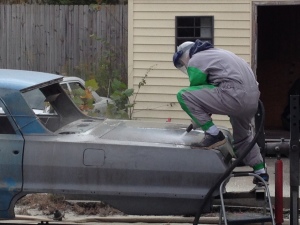 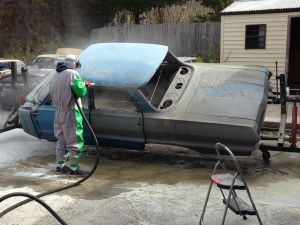 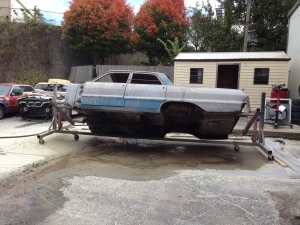 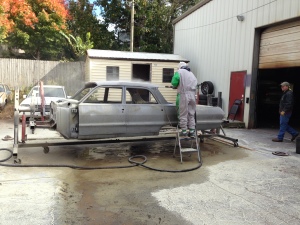 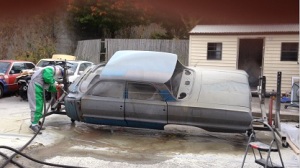 At one point around 1:00 when he was about 70% done with the outside of the body, Jon said something like, “Wow.  This is a really big car”.  Indeed it is.  That’s why it’s the Wide Ride.  The car is so rich in surface area, in fact, that it was obvious that a single day of blasting wasn’t going to be enough time to get the job done.  By the time the shop closed that day, Jon had completed the outside of the body, with the inside, frame, and various smaller bits still left to clean.  He stalwartly promised to return a week later to finish up. 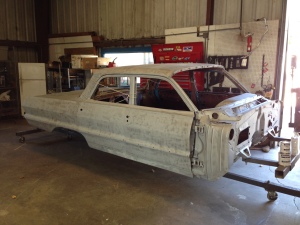 Bare steel for the first time in 51 years

Even with just the outside finished, many evils were revealed.  For one, this car was involved in at least one heretofore undocumented collision.  As best as I can piece it together, there was an impact on the front passenger side significant enough to dent the bumper, bend the bumper mounting bar, and dent the frame where the bumper bracket attached.  This incident seems to have continued on down the right side of the car, causing enough damage to the right fender to require a pot load of body filler.  Not to be left out, the right rocker panel seems to have been gouged and scraped as well, requiring a body pull at some point.  The firewall is also a little wonky on that side, probably from the same crash.

We also uncovered what I think is probably lead body filler from the factory.  That’s not a bad thing, but I think it’s kind of interesting. 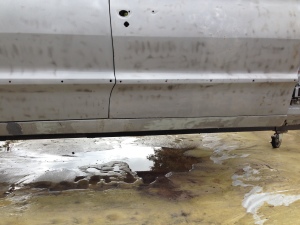 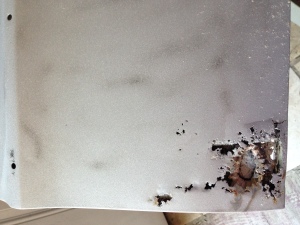 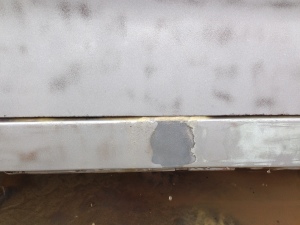 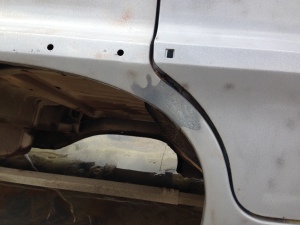 I was out of town the following Saturday, but when I dropped by on Monday I found the body completely finished with a coat of primer to prevent flash rusting.  I don’t have any pictures of it , but the floor pans are swiss cheese.  This was expected and should be simple to repair. The frame was blasted clean and revealed to be quite solid.  This was also no surprise.  The random smaller components, however, had yet to be completed.  Jon would have to come back a 3rd time. 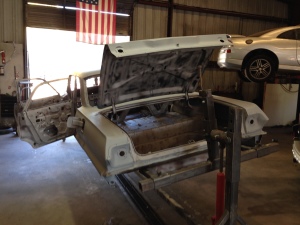 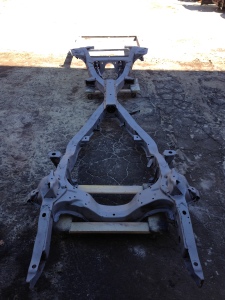 So…week 3 came.  It was once again frigid.  I brought some donuts and a tub of Dunkin Donuts coffee to assist in warding off the cold.  High pressure water and glass made contact with various parts and finally…

…the job was done. 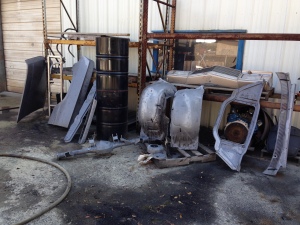 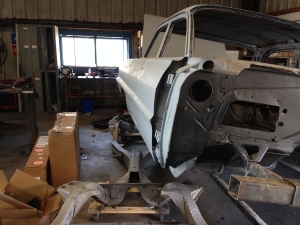 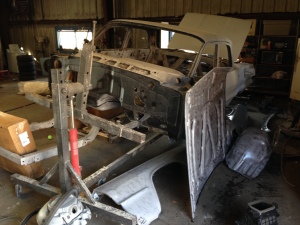 This last picture is included for the sake of curiosity.  That is some more ugly weld.  At some point around 51 years ago, some dude in Doraville said something along the lines of, “Bleh.  Whatever.  Good enough”. 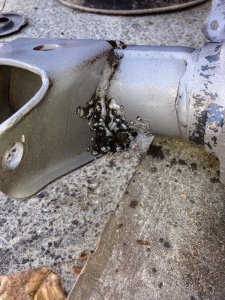 After three days of blasting, Jon finished what was originally scheduled for a single day.  He gladly bade me adieu and mumbled something about charity work.*

*That did not actually happen.  Jon was a straight shooter through the entire process and was a pleasure to work with.

OK, sports fans.  That’s it for this installment.  What’s next?  Who knows?!

Isn’t it time for that car to sit, untouched, for at least 18 months?

There has been a relative mania for the last couple of months, so yes. We are due for a serious malaise.