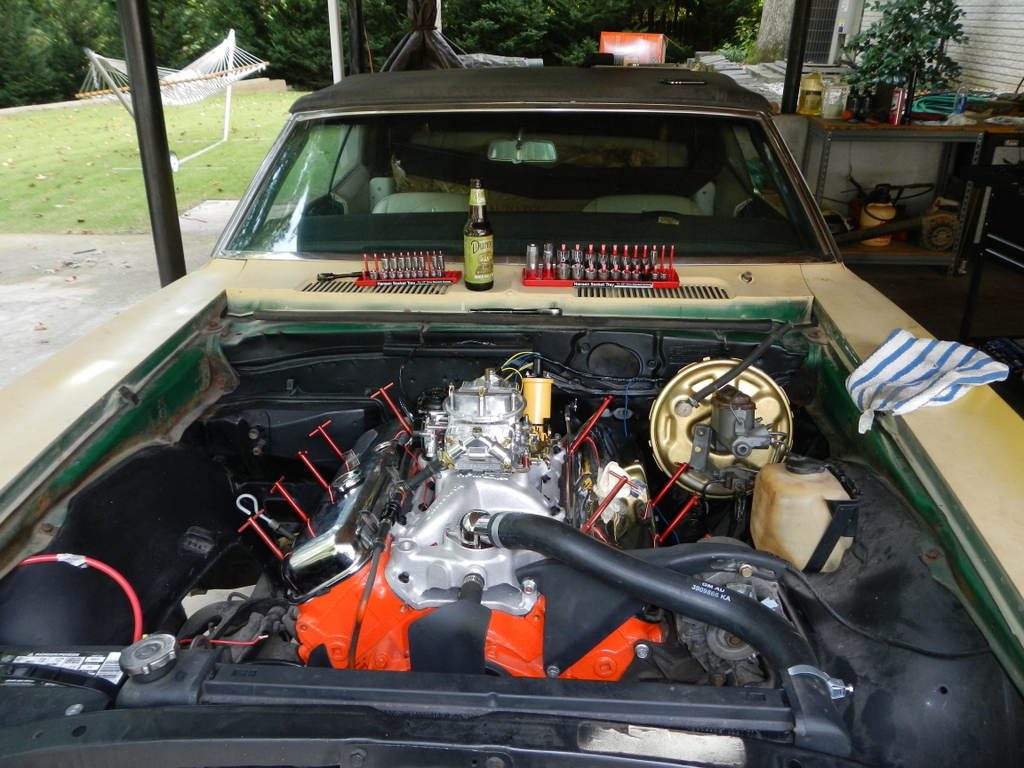 Well, the 2nd full(ish) day of working on the Camaro was full of progress, thrills, spills and even a few cookies.

I’ll recap the weekend with details, in case you’re so bored that you have to read words, or actually die, or something.

Michel has had the car for a couple of weeks now, and we’ve spent some hours working on it on random days / evenings. Mostly poking around, making lists, tackling small tasks to get us acquainted with the car. Mostly, we made lists, and ordered parts. This car was obviously slated for “restoration” at some point, and disassembled in a haphazard way. No carpets, but the seats are in really good shape, for instance. The dash is knackered around the ignition switch from some long-ago mishap, but the engine compartment is neatly painted, along with the motor, trans, and front subframe. Odd, all of it.

So, yesterday (Saturday,) we started work in earnest, our piles of parts at the ready. Jacked the thing up and put it on 4 stands for improved access, and got to work. New engine compartment wiring harness, along with temperature sender and oil pressure switch. There was no apparent spot for the new sender, which led to a FaceTime consultation with our GM consultant Bill. He gave some wise insights and inputs, and this coupled with my eventual downloading of a 1968 Camaro factory assembly manual led us to the correct mounting point, right where I had planned to put it anyhow, above the oil filter mounting boss.

Michel tackled the ugly ignition switch, to install the new lock cylinder (we lacked a correct key for the car…) got it out from the dash and eventually got the cylinder swapped. It’s easy to pull the cylinder when you have the correct key, but we ended up drilling out the old one. Meh, it worked.

Swapped in the new floor shifter cable for the TH400, and checked the adjustment. All good. Ding! Task complete!

Installed the new intake manifold (Edelbrock Performer RPM), with new ARP fasteners, and discovered one stripped hole. Noted need for longer bolt, in the hopes that there were good threads lurking below.

Swapped in the new pertronix ignitor doohickey into the distributor, and made a note to get a new vacuum cylinder for same. Installed the carb mounting studs, and damned the Summit Racing jerks for providing a bolt set that features imperial threads into the manifold, and METRIC thread and nuts for the carb side. Baffling, and annoying. (France!) But we got the carb installed as well.

Installed the new starter, ran the battery cable, and installed the little bracket that holds up the end of the starter, too. Had to find a bolt for that, since of course it was missing. Of course it was, like every other fastener…

Discovered that the hood hinges that were laying on the front floor pans (you’ve seen us lifting off the hood, I’m sure?) are in great shape, and 100% wrong for the car. Neato mosquito.

Installed the new radiator hoses, put the upper alternator bracket back in place, and pretty much buttoned it up for the night.

Now it’s Sunday (today!) and time for a few more hours of fun. My bold assertion that we’d fire this car up over the weekend hangs in the balance! So, we started off with a trip to the auto parts store. Let me just state here for the record that we went to O’Reilley’s over on L’ville Hwy, and I walked out nearly stunned. The 2 guys working there (on a Sunday!) were friendly, and actually knew 1/8 NPT from their own asses. Thanks, guys, you were terrific. They only failed us on 2 parts we wanted, and we had a $400 list of random crap. Well done!

We picked up our junk, and returned for another day of fun.

Michel went to work getting the battery tray in place, while I finished assembling the distributor with the new rotor and cap, and moved on to installing the throttle linkage. We had picked up a longer bolt for the intake manifold, and discovered 1/2″ of solid thread lurking in that stripped out hole – Joy!

I used our newly purchased NPT fittings to replicate the factory installation of the oil pressure switch, and got that sucker wired in. Satisfying.

Some work on the angle grinder, and I miraculously transformed a hunk of 1/2″ threaded rod into an oil priming shaft. Chucked it up in the drill, and it was time to pump some oil! Turn, turn, turn. Turn, turn. Glug, glug, we can hear oil in there… Then I heard oil that was obviously… NOT in there. It was out here, with us, instead. Look under the car and there’s the spreading pool of oil, dripping from the filter. I grabbed the filter and gave it a turn – my herculean strenght meant I was able to give it an extra 1/2 turn by hand, but subsequent examination showed 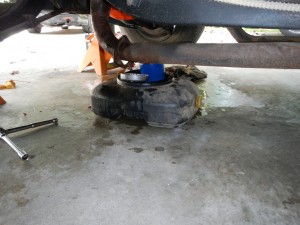 Caught a little of the oil, but most of it ended up on the driveway.

leakage from around the mounting boss. Spin the filter off, remove the 2 bolts holding the filter mount in place (not at all tight), and discover there is a missing gasket. Terrific! Fantastic! Annoying!

Well, thankfully, at this point Tonya and Valen showed up. Michel’s lovely wife Tonya makes some wicked good chocolate chip cookies, and she had chosen this moment to show up and bestow a plate of these upon us. The timing could not have been better – we’ve got a spreading pool of oil because of someone else’s poor assembly, and it’s obvious we’re not going to be firing this motor soon. The cookies may have saved this project! Oddly, Valen turned down the opportunity to hang out with us and clean up the massive oil spill. To each his own! My skin glows like the beaches of St. Tropez, courtesy of the oil that flowed from that car today.

After Tonya wisely departed, Michel ventured back to the parts-hut to try to source an o-ring for the filter setup, while I remained to work on wiring tasks. I got the battery cables sussed, cursing GM for their weirdo supplemental wiring. They are the reason for those stupid battery cables where the main part goes to the starter, and a little supplemental wire feeds the rest of the car. Ditto the negative cable. Anyhow, I got those little wires made up, and installed correctly, and the battery in place.

Michel returned with a gasket cleverly sourced from the base of a random oil filter, but sadly it was slightly too thick to work. There would be no firing of this motor today. Rats. I did hook up the battery and try the light switch to see if anything worked. Success! I don’t know if you have ever worked on a project like this, but one glowing light really did feel pretty good to us today. 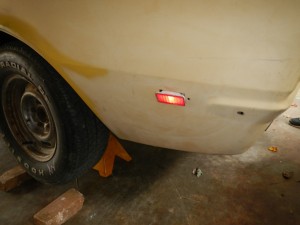 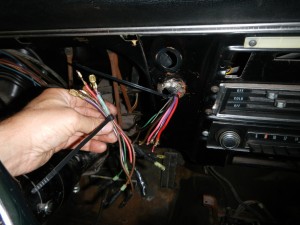 Wiring! Wires! People suck! Electrical tape should be banned! I’m holding the chunks we hacked off, and the factory wires are emerging from the dash. I’ll fix this. Note the butchered dash. Sweetness.

We went back to focusing on ancillary systems, the ignintion swich being one. Now, it’s easy enough to fire the motor from the engine compartment (and I usually do for the first start,) but it’s nice to have switch in the dash, so we took a closer look at the wiring. Michel peered, poked, and pulled, and discovered… A rats nest. The harness leading to the ignition switch was hacked and patched – someone cut off the original leads and extended them ( so they could attach the switch from below the dash?) in such a way that all the wires were the wrong color, and fell out of the connector on the back of the switch. So, we pulled the cluster (dropped the column) for access, trimmed off the crap, and made plans to restore the proper connector the the wiring. 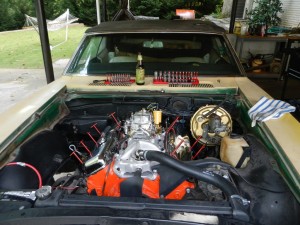 If it weren’t for that orange color, this would be pretty cool.

So, this completed, we moved on. I got the throttle linkage in place, Michel got the random vacuum and coolant fittings installed. Man, there’s a lot of random crap bolted to an engine. A lot.

So, fuel and coolant lines are in place. Heater hoses need one more fitting. Wiring is mostly present, but plugs and those wires await a test cranking after the oil filter mess is sorted. Need to put new connectors on the wires to the ignition switch. Dump some fuel in the tank. THEN, maybe, we’ll make some smoke and noise.

Pretty sure I saw when the cookies showed up on that video. Sweet. Oh, and the car is ok, too.