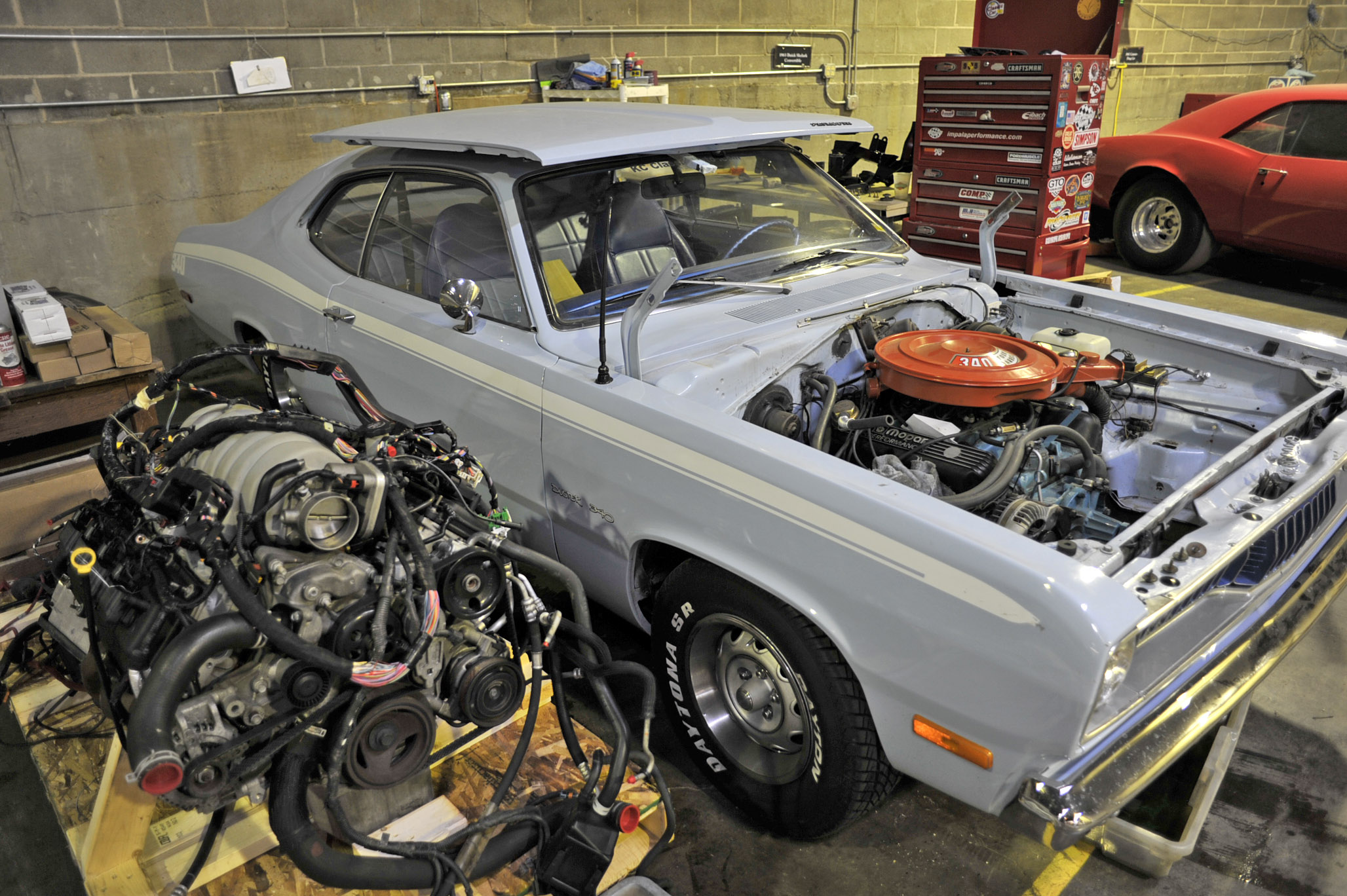 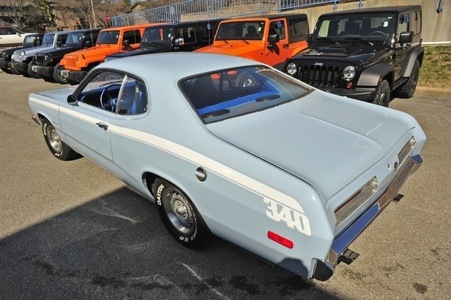 Here’s the Duster on the day I test drove and ultimately bought it.
Nobody knew what was in store for the little blue car at the time.
Also take note of the sweet orange jeeps in the background.

I was driving around with my wife when I spied a baby blue Duster 340 in front of Overland Park Chrysler/Jeep in Overland Park, KS. Ever notice how much old cars stand out among the wind tunnel tested, focus grouped, homogenized vehicles of today? Pretty startling, really. We pulled over to check it out and the Duster looked alright. The body seemed solid enough and the interior was in good condition. The interior was nice and clean and kinda wacky but I liked it.

We drove on and I didn’t give the car much thought at first. But over the next few days the Duster managed to nestle into a comfy corner of my conscience with little interest in leaving. It whispered to me from time to time over the next couple weeks.

“Just have a little taste, bro…”

“That honey of yours will dig it, too…”

“Come on man, it’ll be groovy”

I finally caved and set up an appointment to check out the car. 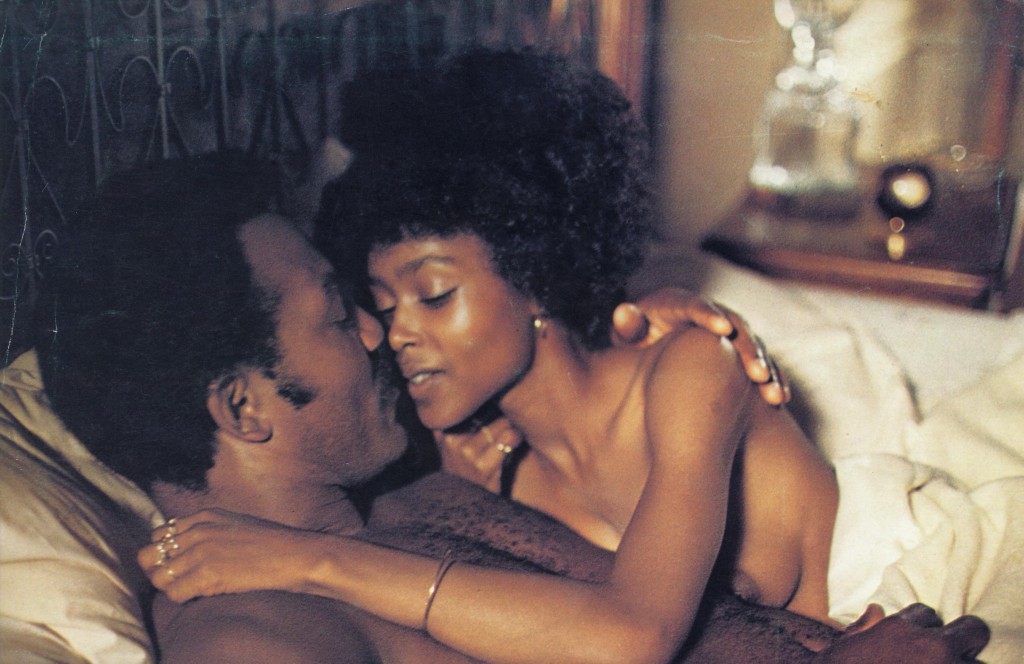 This is kinda how I imagined the Duster voice playing out in my head.
Although I’m a middle aged, doughy white guy, I put myself in the Shaft roll.

Frank Thompson used to own Overland Park Jeep/Chrysler. He also happened to own the baby blue Duster.  His nephew owns the dealership now, but he maintains a little shop in the back where he restores and sells vintage cars. Upon entering, my jaw hit the floor. This sliver of the building housed two rows of cars, twelve deep and about an inch apart. Thirties and Forties Fords of various configurations were packed in with a trio of shoebox Chevys; a ’55, a ’56 and a stunning red on red ’57 with the hottest engine one could get at the time. There were a couple ’58 Impalas and some sixties and seventies GM Muscle. My favorite was the slick red on red ’65 Impala SS 396. Each and every one of them had been beautifully restored. The Duster was not among them. 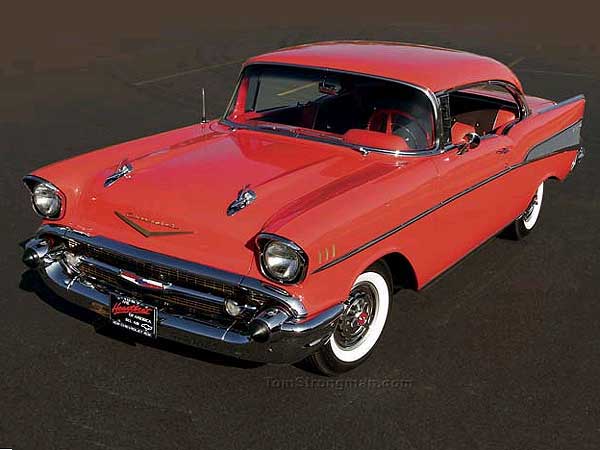 Here’s a shot of Frank’s sweet, sweet ’57 Chevy. It’s astonishing.
This photo is used without permission from Tom Strongman and I’ll remove it at his request.

The Duster was relegated to the parking lot with a handful of other lesser vehicles, all lacking the clout to gain entry into that magnificent room. There was an ’85 El Camino “Conquista” and a ’40 Buick, maybe a random Chevelle or two and a sixties pickup truck.

According to Frank the Duster was a trade-in for a late-model Challenger R/T. You know, with the 6.1 Hemi engine.

Upon inspecting the car it was obvious that there had been some rust repair in the trunk and rear wheel wells and the quarter panels had been replaced. They looked pretty good but the one on the drivers side has screws running along the bottom edge. Seems like a pretty shabby method of installing a quarter panel to me. There were also some rust issues under the hood that had cleaned up and painted over. The shock towers were good and in general the car was solid.

The 340 ran well enough. It backfired once during my test and seemed fairly anemic. I figured it would be fine with some tuning. The 727 shifted fine and the car drove well with good brakes, tires and suspension. I did notice a couple drops of transmission fluid on the pavement but you know the saying, “If a Torque Flite doesn’t leak it probably doesn’t work”, or something to that effect.

I wrote out a check for a sum that likely exceeded the value of the Duster and handed it to Frank. I would pick it up the next day and drive it home. It only died once and restarted without drama. 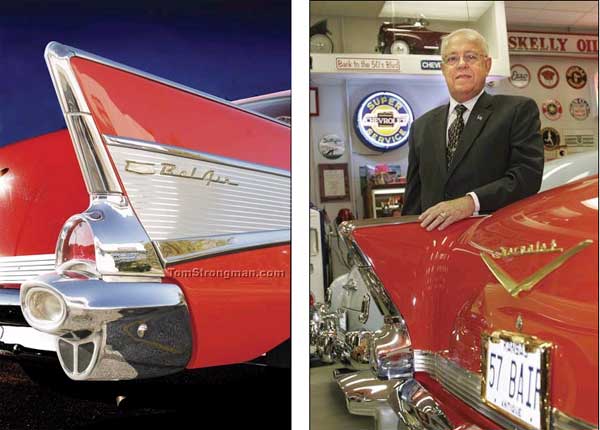 There’s Frank posing with his ”57. Once again, I’m using these photos without the permission
of Tom Strongman and I really hope he doesn’t notice them.

It was springtime and the Duster’s lack of A/C was not an issue as I drove it a few days a week. It started running better from regular use but still didn’t run particularly well. The carb needed to be rebuilt or replaced and new plugs and wires were probably in order. That transmission leak turned into a veritable gusher. I piled pieces of cardboard under the car and went about my business.

As expected, Jim mocked my inactivity in dealing with the Duster. I used  the preparation of The Judge for the Power Tour as an excuse for not addressing baby blue Mopar. We both knew I was full of it.

We drove the Duster to the place where The Judge is stored on Power Tour Eve. After extracting the thundering Pontiac, I backed the Duster into the spot it vacated. Little did I know that this was the last time the Duster would move under its own power until said power came from a late-model Chrysler Hemi. 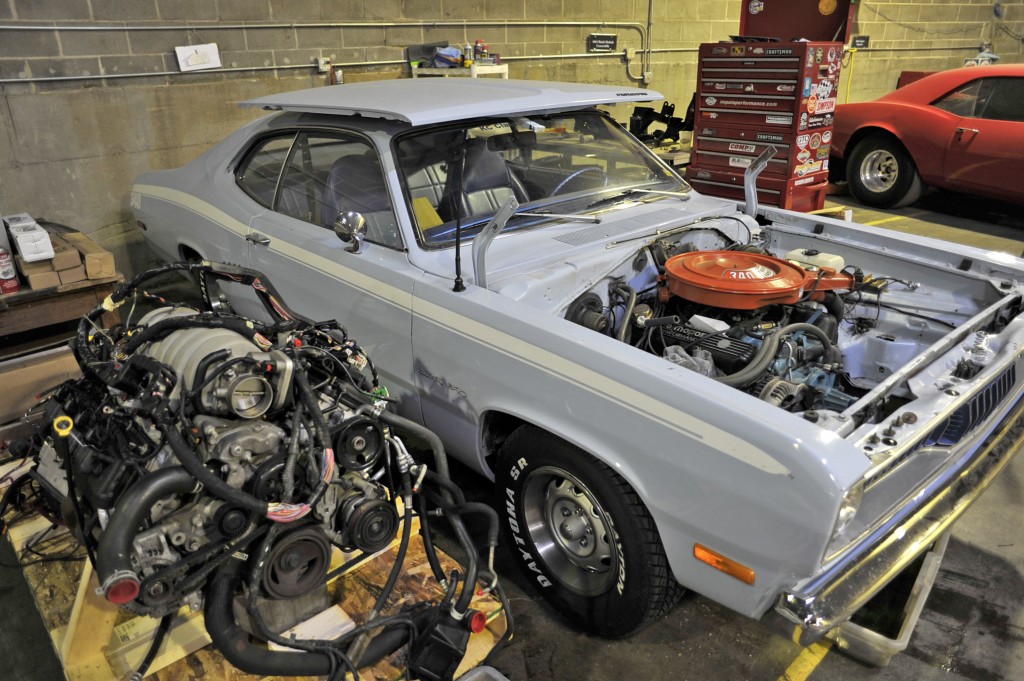 There’s the Duster next to the 6.1 Hemi. As you can see the hood is off and work has begun.
The engine will be coming out later this week and the K-frame will drop soon after.

Turns out, procrastinating on that tune up worked out alright.

This car owes me. It’s true. In the Duster afterlife, free beer is in my future.

It will drive and drive. It says it will never die!

No free beer for you!