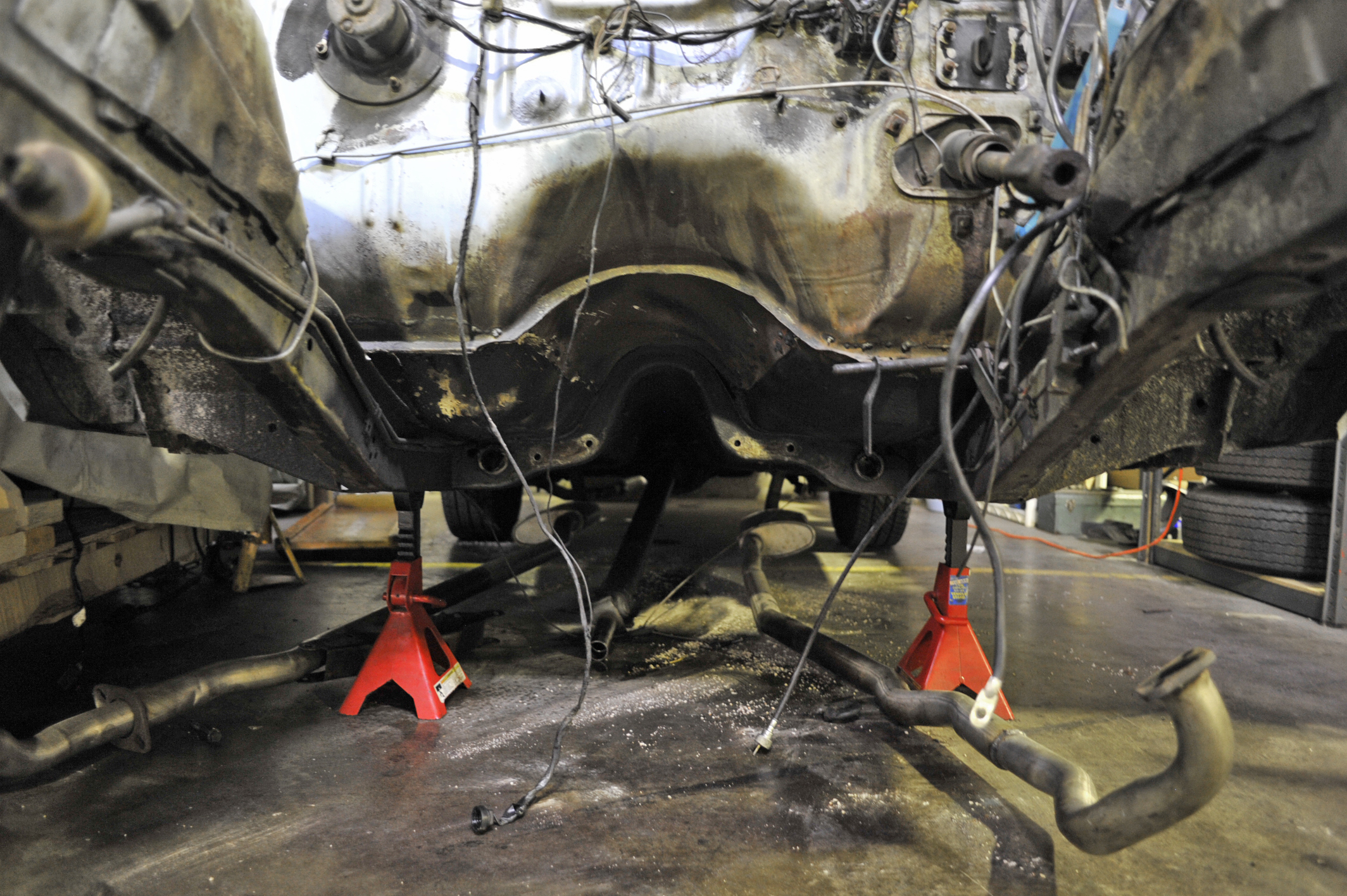 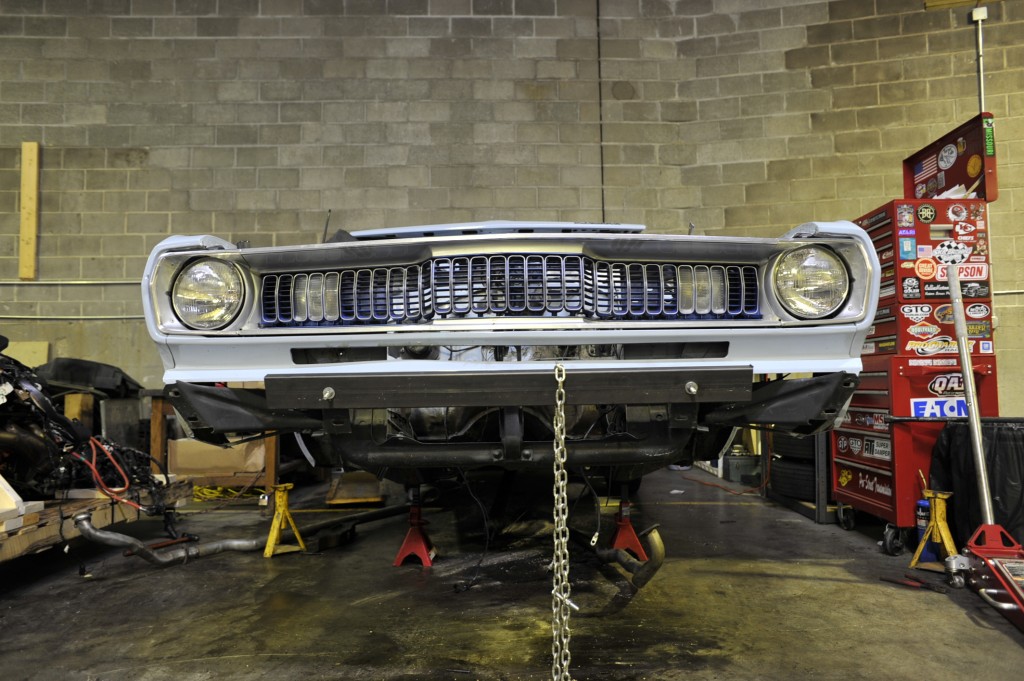 Okay, people, or rather, “person”, I made some fairly significant progress on the duster today.

The engine, transmission and K-frame were removed, which paves the way for all manner of nonsense to come.

While I’d like to focus on assembling the assorted front end components at this point, the current priority seems to be to clean up the engine bay. The 340 and 727 both leaked fluids at an astonishing rate so things are pretty messy. I figure I’ll clean things up and then move on to putting the front end together.

Removing the engine/trans/k-frame was pretty fun. I love the fact that I was able to keep all that stuff on the ground while I just lifted the body of the Duster with an engine hoist. Sure, you gristled Mopar veterans probably don’t think twice about this kind of thing, but as a relative noobie, I really appreciate the whole process. 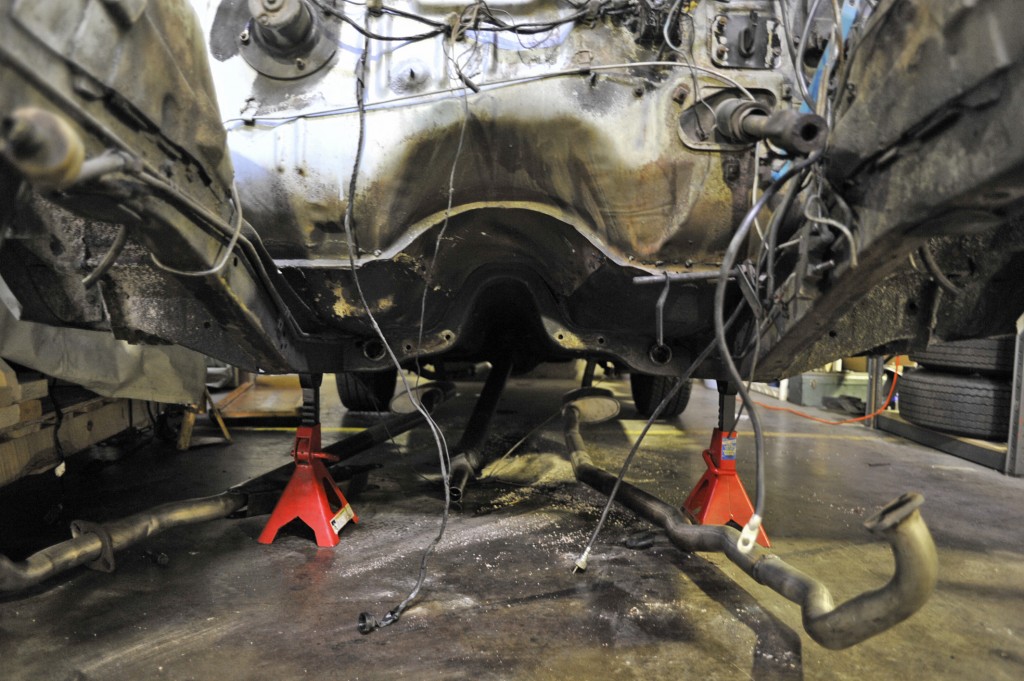 My intention is not to build some kind of show car. I want a ride suitable for flogging, abusing and enjoying. Regardless, the engine bay and undercarriage need to at least look presentable. I don’t think it’ll take much to get the engine bay there. Some paint and elbow grease will go a long way. Speaking of paint, I hear Michel’s Camaro will be looking good soon. I just wish he stayed with the Rally Green.

As you may have noticed, we’ve been  doing a lot of time-lapse footage of things lately. Sure, it’s entertaining, but it’s also pretty informative. If you look closely, you just might see me taking an angle grinder to a rusted-stuck torsion bar. I won’t need it again, so why not? Good riddance.

So this is where we are.

Snazzy. I like how the other people that enter your frames seem to only observe, leaving you to struggle solo. Hilarious, and character building! Also, fire extinguisher – good idea, probably. Did I see a cat?

I wonder if you can set the front end on something that has wheels (furniture dolly?) to wheel the whole contraption closer to the doors so you can use more water / pressure washer cleaning that thing up.

You have at least 1.5 followers, as I am also an occasional visitor to this riveting addition to the automotive restoration blogosphere.

Your check is in the mail, Mr. Donehoo.