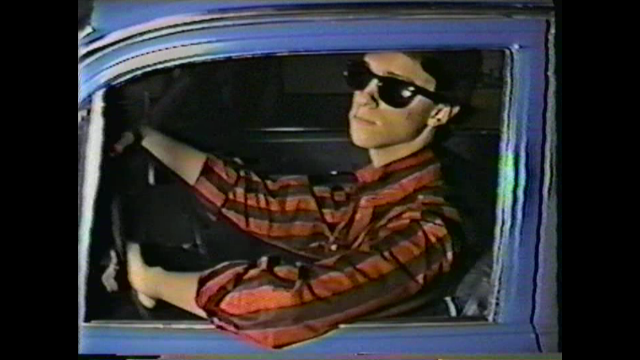 I suppose that since this project has at least theoretically been underway for a while now, I should get around to presenting the process to all of the Internets for posterity’s sake. I’m told that blogging will spur achievement by shaming those who move at a speed viewed as unacceptable by denizens of the blogosphere. So, in hopes of conquering what will surely be oceans of malaise and overwhelmed indecision, I make my inaugural post and mark the point in time to which readers can refer when they ask, “What ever happened to that project?”

So here’s the deal: I’ve got this car.

It is a Chevrolet Bel Air four door with a straight 6, 230 CI engine couched underneath its latitudinous hood.

In the days of my youth, the car was just ‘piece of crap’ old. Now, it’s ‘classic car’ old. So, for reasons mostly sentimental, I’d like to fix her up and…uhh…drive around…I guess.

Back when hair metal was just starting to really catch on, my friends dubbed my car, “The Wide Ride” for obvious reasons. The old girl is probably only just narrow enough to fit through the Panama Canal should she somehow find herself floating through such a place, which would really be pretty weird, I guess. We often joked that we would one day quadruple date and all four couples would ride comfortably atop voluminous bench seats. Sadly, this never happened, most probably because we really never had many dates.

Since we had nothing else to do, we even made a video dedicated to the splendor and majesty of the Wide Ride. You’ll never see it, but there are some pretty dramatic moments, like THIS ONE: 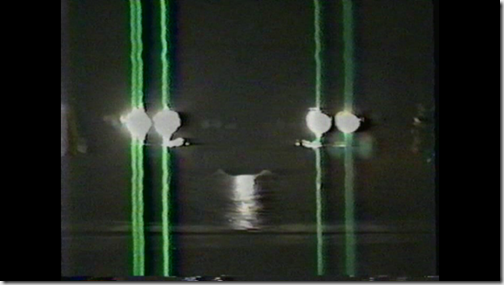 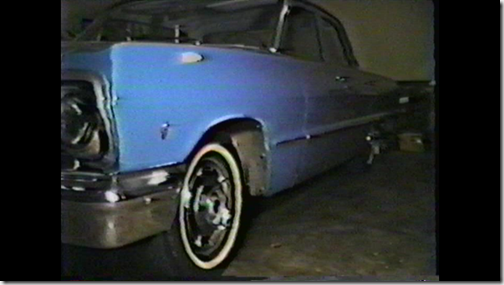 …and really…who could resist this? 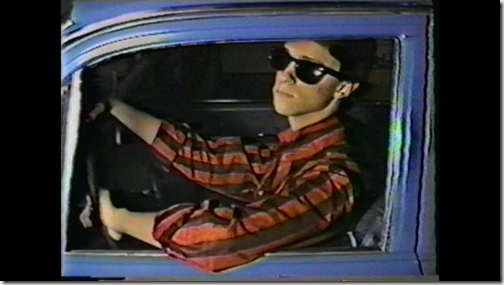 Let’s fast forward 15 years or so. Around that time, I decided (for the first time) to pull the ‘Rider out of storage and see if she could be fixed up. By then, she looked like this: 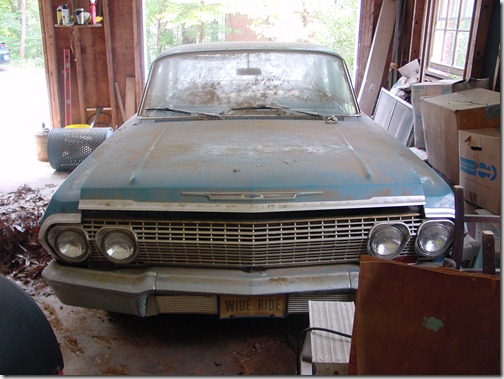 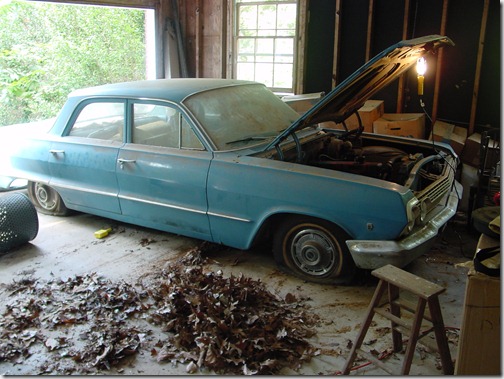 Oh, my plans were lofty. I was going to keep her period original. I was going to keep the inline 6, add lump ports to the head, swap the crank, swap the cam, swap the tiny Rochester single barrel carb out for a 4 barrel, add headers, and generally bump the old inline from something like 100 HP up to a number quite possibly approaching 180 HP! Retro speed, baby! (Err…retro something) Every nut and bolt would be meticulously restored and put lovingly back in place. It was going to be great!

The official reason why rebirth #1 stalled is that I had a line on a large space to work in, but that fell apart, leaving me unable to complete the dissasembly required. By that time, I had actually gotten her running again and was occasionally tooling around town, wondering if anything was going to burst or burn or pop or explode, so somehow it was not very difficult to park her and say to myself, “I’ll figure something else out and start work on her again soon”.

The earth travelled along its celestial course.

Somewhere in the universe, a creature drug itself for the first time from the primordial slime onto land.

…and the ‘Rider slept. 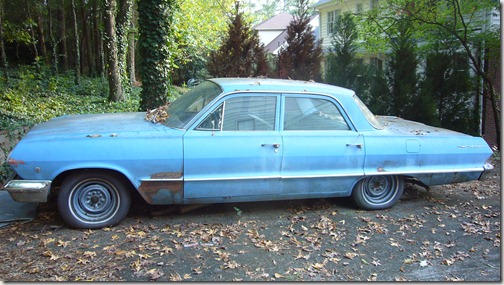 During her rest, the Wide Ride would plead from underneath her Auto Zone car cover. “Why have you abandoned me? Why are you just letting me rust? I always tried to do right by you. Stop piling firewood on me. I DESERVE BETTER THAN THIS!” Finally, her pleas and my shame reached a zenith and I decided to give the restoration a second shot.

In the intervening years, I had decided to follow everybody’s advice and swap out the inline six for a small block 350. It would be a simple swap and I’d have horsepower to spare; even enough to add air conditioning or maybe even power steering. Then, Jim (you can watch him messing with Michael’s Camaro) COMPLETELY BLEW MY MIND by suggesting an LS1 swap. Once my brain reassembled into a contiguous unit, I came to see the logic of such a swap and chose to move forward in that exact direction!

Therefore and herewith, let it be known that the current plan is a restomod: LS1 engine, 4l60e transmission, air, power steering, disks in the front at least. From the outside, she should look like the day she rolled off the factory floor in Doraville. Underneath, she’ll have a modern, computer controlled, and hopefully super reliable power train. I’d still like to keep as much original as possible, but when it’s more logical to replace rather than restore, that’s what I’ll be doing. 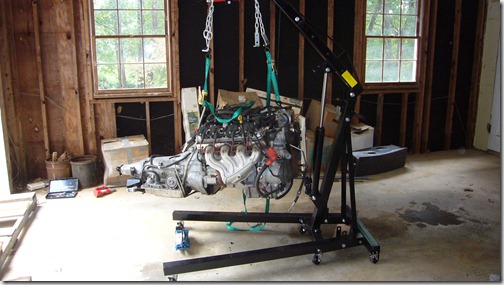 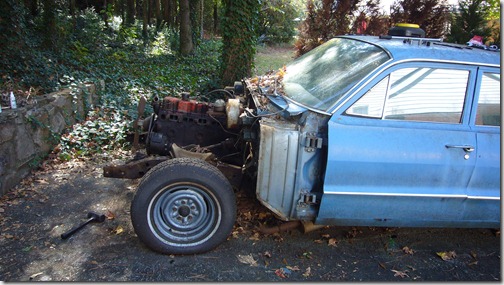 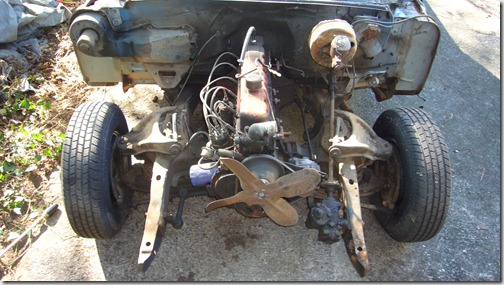 Alright, then. That’s my official first post. From here forward, there will be less exposition and more just doing stuff.

I surely hope so, anyway.

There's a Very Large Hole in My Car.

Very good. Well, I would just like to say this is the first time I’ve ever left a reply.

I’d wager you still have that shirt.

Also, hurry up. June is looming.

Hark, the days of the Riders’ rebirth are at hand! Once again, the Master has returned to his firey forge. Oh yes, the flame is re-lit. And all the earth-dwellers, as in the Days of Yore, yearn for the time when the Riders’ tread will be felt upon this earth and its delicious low rumble will stir the pits of their bellies. Verily, we all tremble! Because now the Rider will return with a FAR, FAR greater power — a power it has never known! A power that can barely be conceived!!! The mind reels. The body shakes. The heavens part wide and the thunder rolls. Bow down all peoples! The Wide Ride doth surely come!!!

I sit here trying to wrap my head around visions of a convoy. It is comprised of a 1972 Plymouth Duster in baby blue powered by a late model 6.1 Hemi engine, a big block Camaro convertible from 1968 and bathed in dark blue, this 1963 Bel Air sporting LS power and also blue, and possibly a 1967 Ford Galaxie 500 four door in white. Maybe even an early seventies Pontiac LeMans convertible could add to the white paint contingent. Talk about the mind reeling and the body shaking. Welcome to the show, Tim!