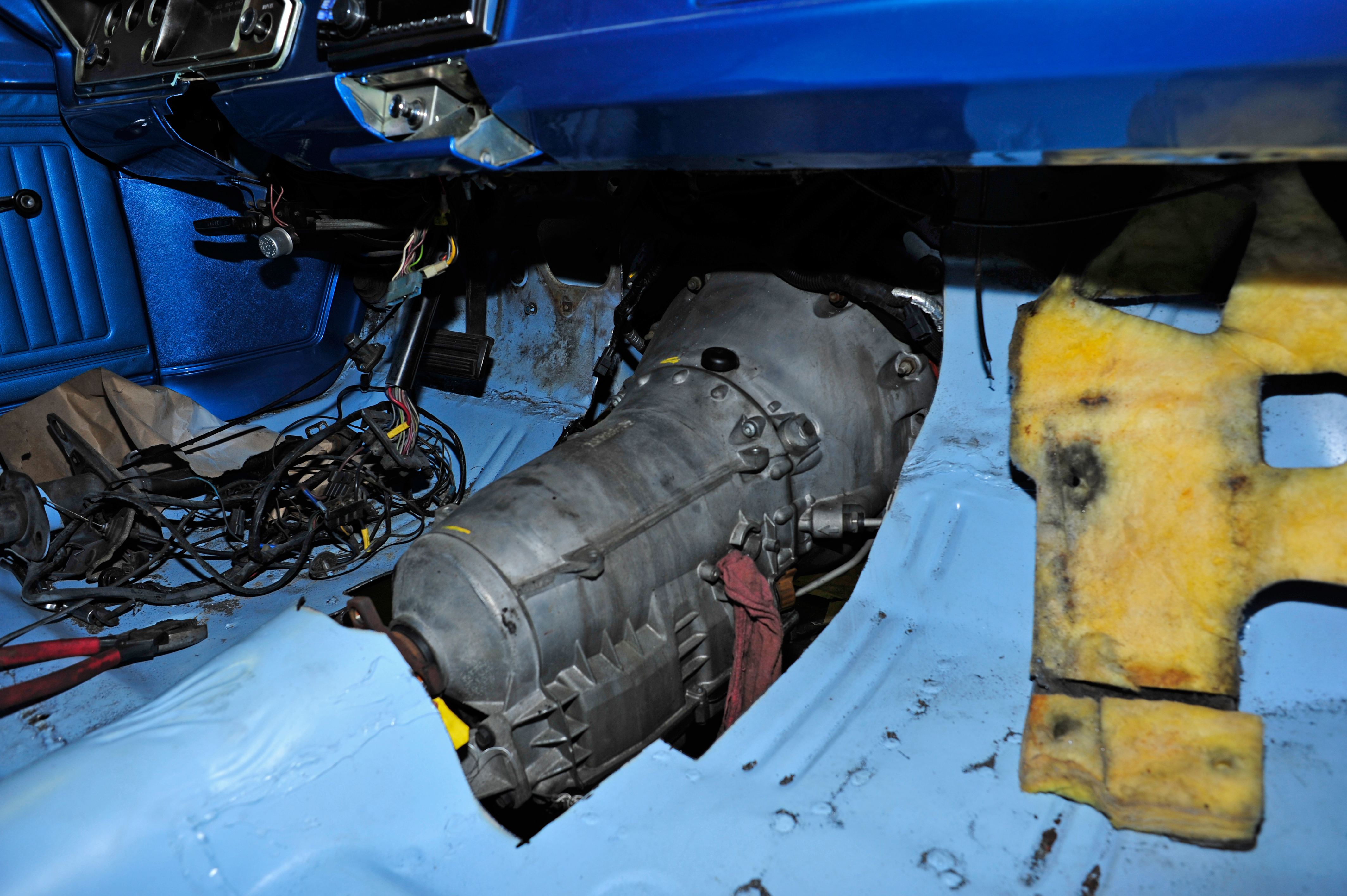 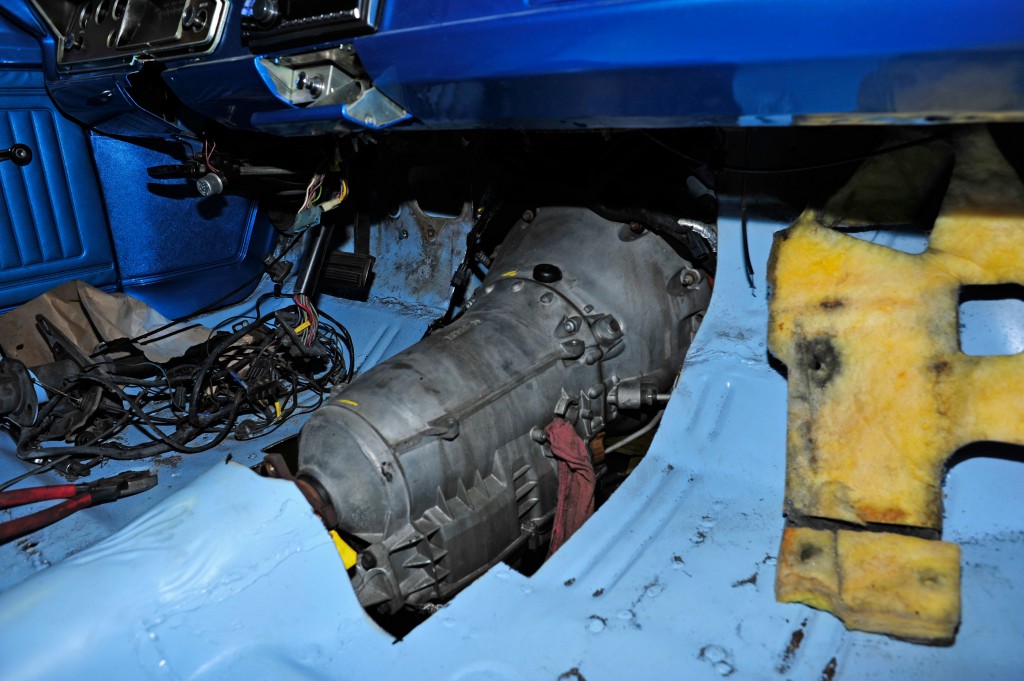 Turns out, I wasn’t aggressive enough with the angle grinder last time around. Now there’s plenty of room!

I started chopping up the Duster last week in order to make the fat NAG1 transmission fit. All was going well until I encountered the crossmember to which the original transmission was mounted. I wasn’t sure if I should chop that up so I stopped working and got in touch with Kevin Broderick of Fabrications Unlimited. His advice was to remove whatever was necessary to give the transmission the room it needs. Then he’ll figure it out later. With his liberating words fresh in my mind I dove in. 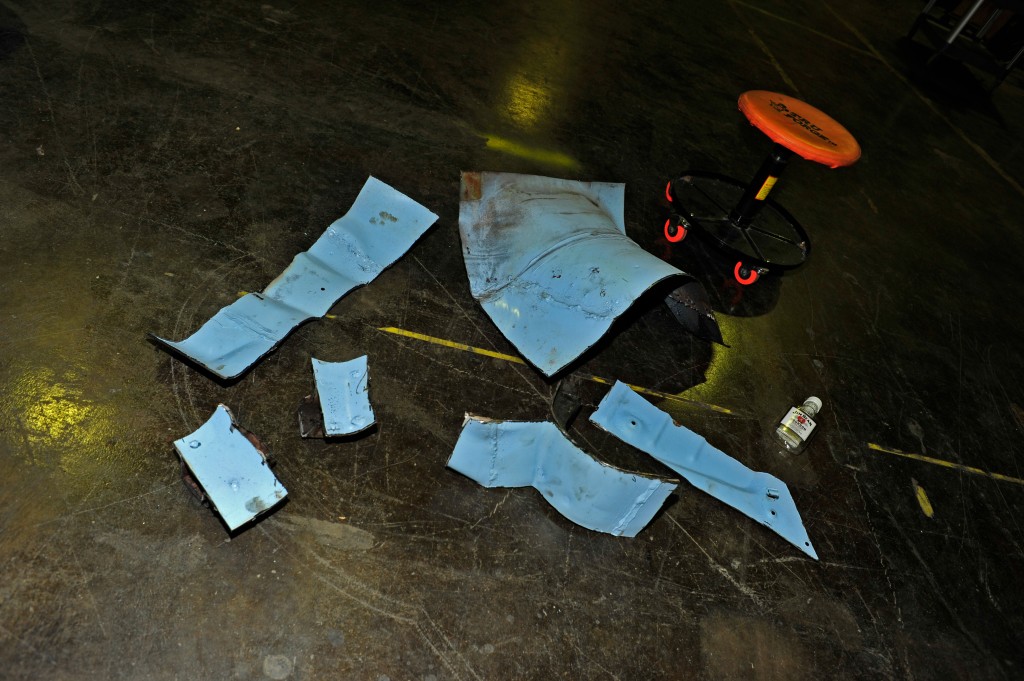 Even nasty, sharp-edged scrap metal comes across as docile and harmless when bathed in B1 Sky Blue.

With the transmission tunnel and crossmember out of the way it was time to finally get the K-frame bolted up. My arrangement of having the K-frame, engine and trans unit on a rolling platform worked well. Once we got the front bolt holes lined up we started threading the bolts for alignment purposes. Then we put a jack under the mounting pad of the transmission which was hanging over the edge of the platform a bit. A couple cycles of the jack brought the angle of the car’s frame rails and the K-frame into alignment. The we dropped the car down so it and the K-frame were mated and partially threaded the rear bolts. With everything seemingly in place, the K-frame bolts were torqued and the shock tower backing plates were installed. And with that the K-frame, engine and transmission are officially installed with the exception of transmission mount which will be dealt with later. 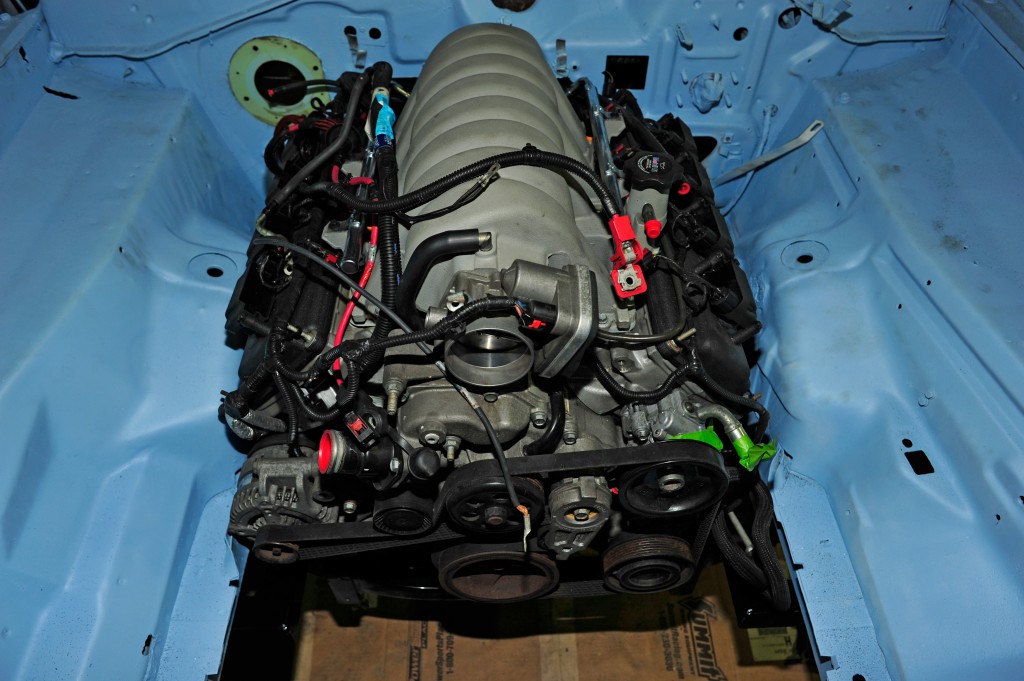 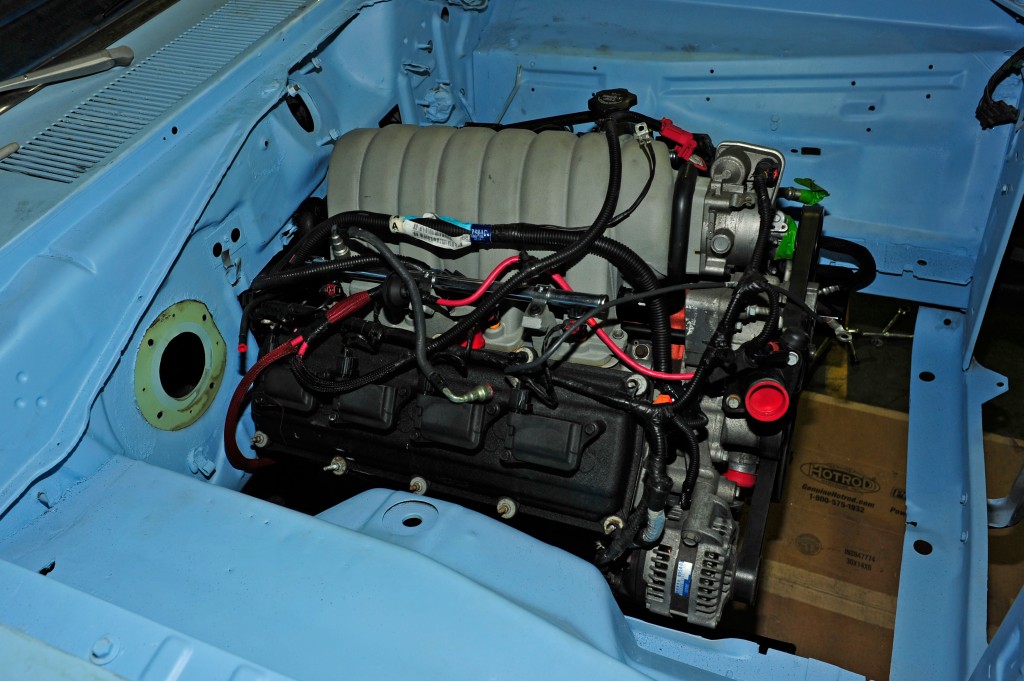 Note the fit of the alternator as it nestles into the original contours of the Duster’s engine bay. 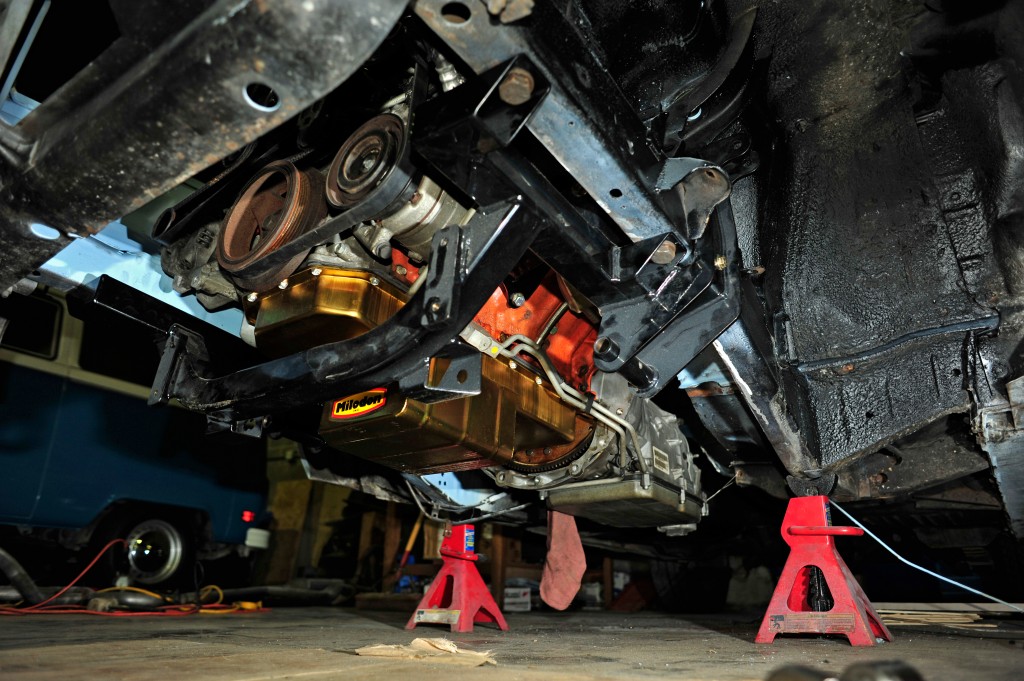 The Reilly Motorsports AlterKation design makes for an incredible amount of room around the engine.
And as advertised, it was simple to install.

Next up is the installation of the front suspension, including power rack-and-pinion steering, 13″ Wilwood disc brakes with six-piston calipers and all sorts of shiny, brand-new parts! Then once I find some temporary wheels and tires Project Hemi Duster will be put into the capable hands of Mr. Broderick for a while.

I’m feeling confident about having the car ready in time for the Hot Rod Power Tour 2013. 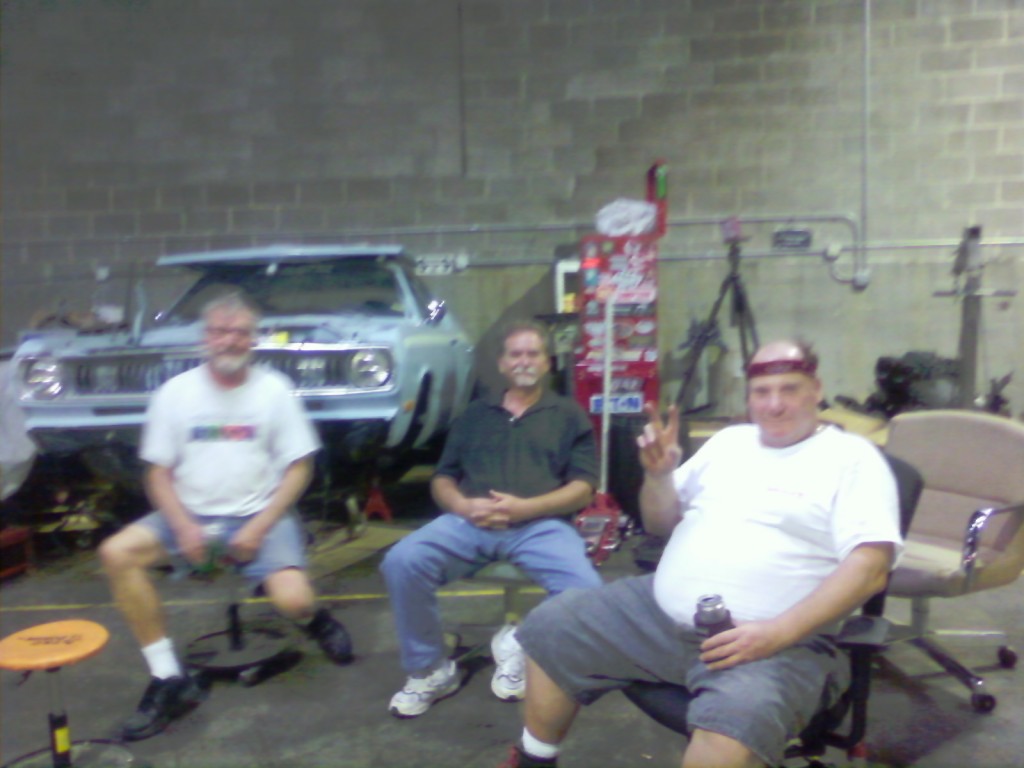 The Duster has groupies! These men seem to just kind of hang around and bask in its glow.
I wasn’t even around when this photo was taken. 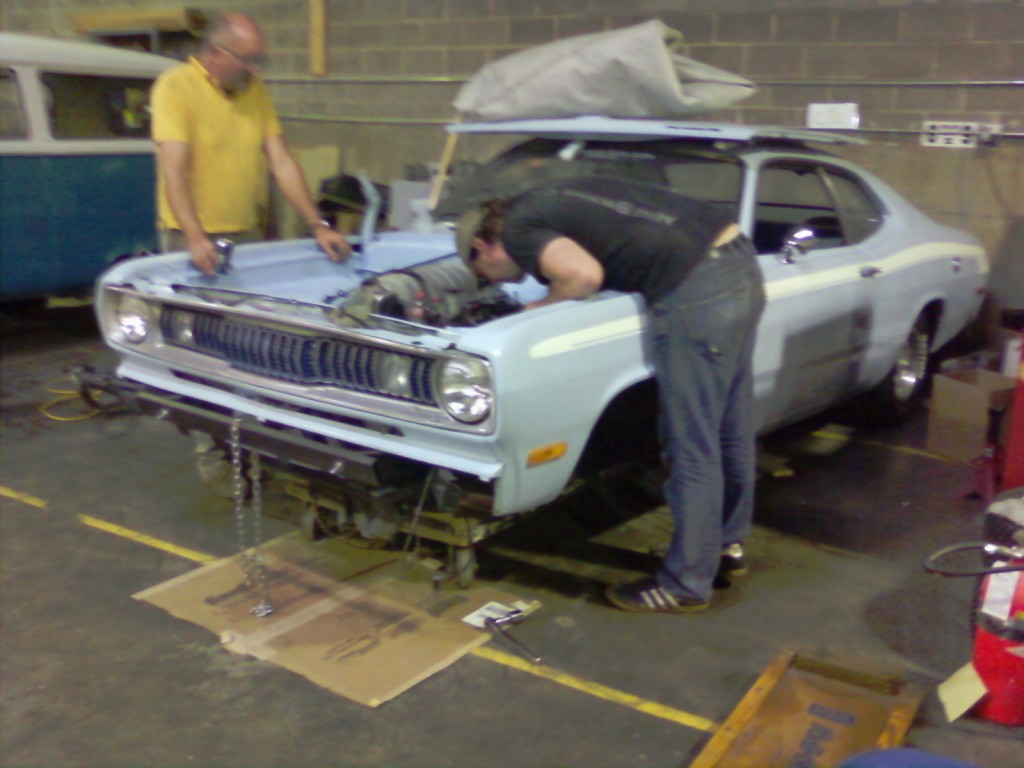 Does this Duster make my ass look big?

Things are getting fun. See you next time.

There's a Very Large Hole in My Car.

That engine and K Frame look pretty damned cool against that stupid baby blue paint. For temporary wheels, I’m sure you’ve considered a pair of spare donuts from a newish mustang, right?

That is my plan exactly, Jim. They seem overpriced on ebay so I’ll be heading to U-Pull-It or Pick-A-Part or You-Wrench-It or whatever they call those places. In the end, I imagine I’ll be shelling out the dough on ebay.

Turns out, Gary is going to loan me some roller wheels from his Factory Five racing days. Thanks, Gary!