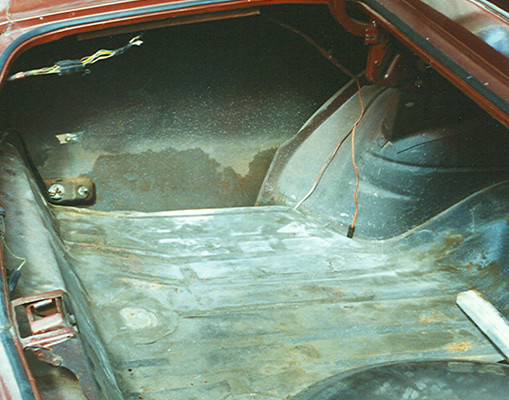 Folks want to know, “How long have you had that car?”   (Andy Rooney voice) …I think it’s some kind of profiling question…  to determine if the owner bought a cool car or made it that way. (end Andy Rooney voice)    I’ve had this car for nearly twenty years.  Twenty years of ongoing mechanical and aesthetic improvements.  Twenty years of plans, good intentions, dreaming, wishing, bloody knuckles, Bondo fumes, carbon monoxide fumes, all sorts of great stories involving re-built water pumps, failed wiper motors, a ball joint shearing off and collapsing my front end…  The list goes on.  Suffice it to say, I am attached to the ol’ gal…   I first saw this car in a parking lot in Dallas, adorned with a shoe polish “for sale $1,200” sign on the back window.  Immediately prone to an impulse buy, I tracked down the owner and made the purchase within a week.  Prior to pulling the trigger, I test drove her, asked pals whether it was a prudent acquisition, etc.  Cost: $1,000. Yes…  I hammered the guy who sold it to me for a lousy $200.  For a cool grand I was the proud owner of a rough edged project car…   (click on the photos to enlarge ’em) 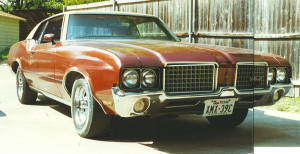 Bumper and grilles had seen some action and years… Some sort of brownish-reddish paint, topped with a vinyl roof… Cragar wheels and off-brand radials… Quite the White Trash ride.

Rear bumper had been bent in a towing debacle… Rust eating the bottom edge of trunk… And… Note the pea-shooter exhaust! Who cares? I had to have it!

The work horse… A dirty, but reliable and die-hard Rocket 350, needing some attention… 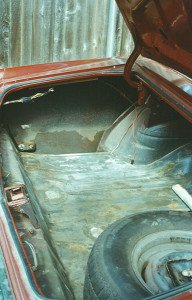 Rust, spills, filth and dangling wires! I can’t make this up. Trashed = Work to do!

So…  back in 1994 I was the new owner of this beast…  Immediately, all sorts of planning and scheming begins.  Prior to any outrageous cash outlay, It was suggested /mandated that I replace the time-worn and less-than-efficient original distributor (points and breakers) with an HEI and snappier plugs.  My pal, Robert helped me stab the new distributor and dial in the timing…  Immediately I reaped the reward of better spark and fuel burn, which was nice.  Also on the list of items tended to was a complete front end re-build…  Tie rod to tie rod, Ball joint to ball joint and everything in between.  Robert was once again the instigator.  He lent me a shit load of tools and, in essence, told me not to call him unless I really needed to.  Trial by fire…  I dove in head first.  Ordered all the parts, tore it all down and re-built it.  Too proud to call Robert, I was forced to bust ass and learn how to do this kind of shit on my own.  Since then, nothing has seemed too difficult.  Front end work is roll up the sleeves and get to it stuff.  With upgrades to ignition and a rebuilt front suspension, my project car moved up a few notches to a less than luxurious daily driver.  Other essentials were addressed, too numerous to explain in painful detail.  Regardless, my next post will cover the high points and offer some before and after photos of the steady transformation that has taken place to present.