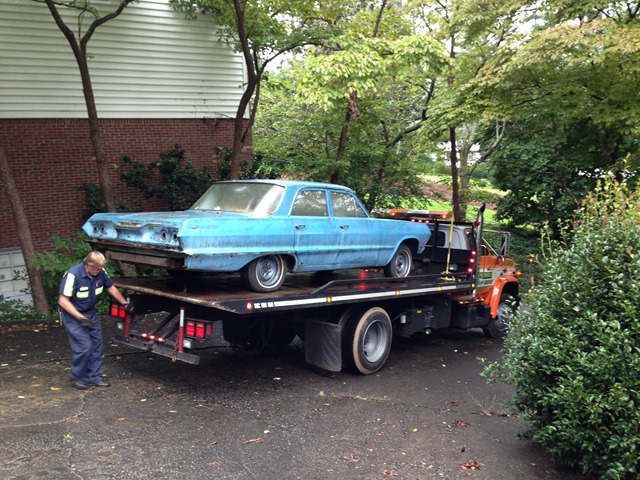 There really wasn’t much work done on the Rider this weekend, but there was a fair amount of energy expended in preparation for work that will occur later.  On Friday morning, Kuykendall Towing showed up to take the car north a few miles to BRP Muscle Rods.  Jeff and Nick at BRP are going to use the Rider as a test bed for their new B-Body LSx conversion kit and headers, so the car will be living there for 2-3 weeks.  I didn’t get any pics at BRP, but here are some exciting action shots of the Rider preparing to go on its longest trip in twenty or so years. 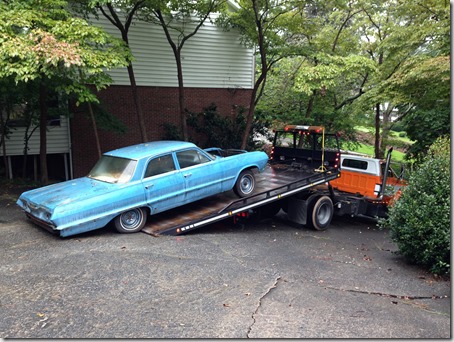 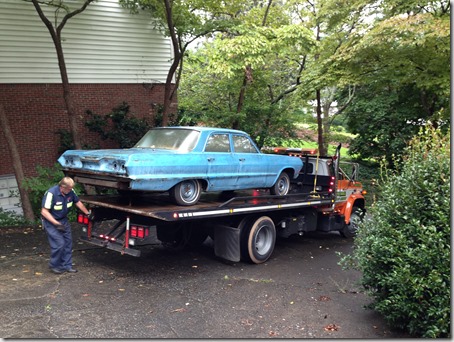 As she left the driveway, she was wobbling on those 50 year old springs like a bowl of Morrison’s Jell-O, but that is a problem for another day.

After departing BRP and subsequently enjoying a fine breakfast at Waffle House, I set about separating the new LS1 from the transmission in order to swap out the old GTO oil pan and install a pan from an F-Body. This should be a relatively simple operation, but I find objects with a great deal of mass (relative to my head) that are swinging in an apparently precarious fashion in combination with the need to manipulate said objects to be disconcerting.  Nevertheless, I did succeed in separating the two without inducing injury or death. 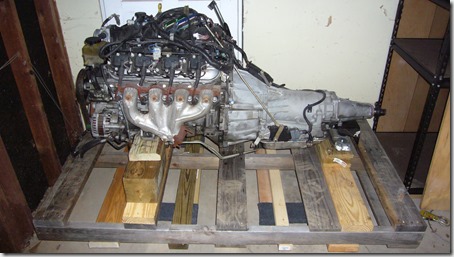 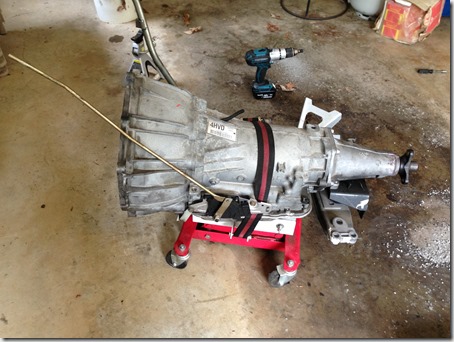 Getting the engine from the hoist to the stand had me stumped for a while, since the geometries of the stand and hoist were not getting along very well. 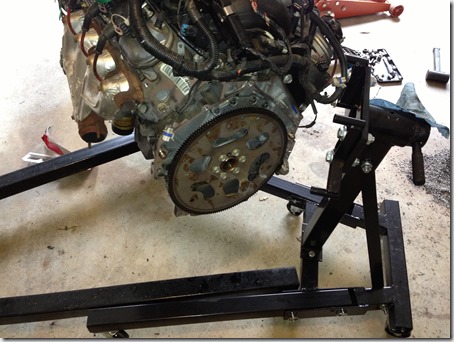 I sent an exasperated text to my old buddy Jim, who suggested removing the spider from the stand and bolting it to the block first and then guiding the stand to the engine instead of vice-versa.  Seeing as how this seemed such a simple solution, and seeing as how I couldn’t believe it hadn’t occurred to me, I decided to stop doing anything and go drink beer.

Two days later, I followed Jim’s suggestion and the engine was transferred without too much hassle.

Here’s where I offer some rather obvious advice:  When you are bolting an engine to a stand for the purpose of removing the oil pan, you will probably want to avoid bolting the spider TO THE OIL PAN ITSELF.  If you do, you’ll have the pleasure of getting the engine back onto the crane and then back to the stand again.  Yeah…it actually just made me laugh. 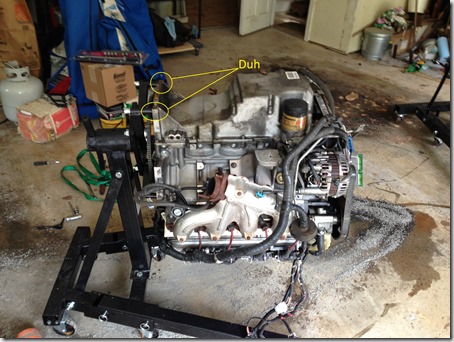 Let’s try that again, shall we? 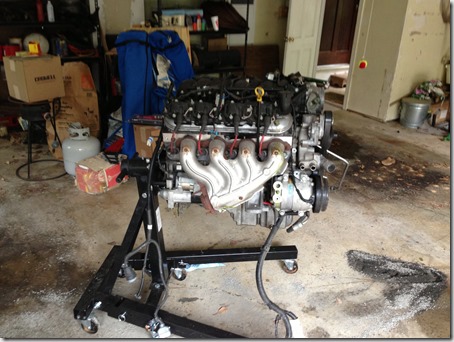 While the engine was rotated, the oxygen sensors all fell out of their hiding place in some parallel dimension.  I’m pretty much completely relying on Jim knowing where they will go. 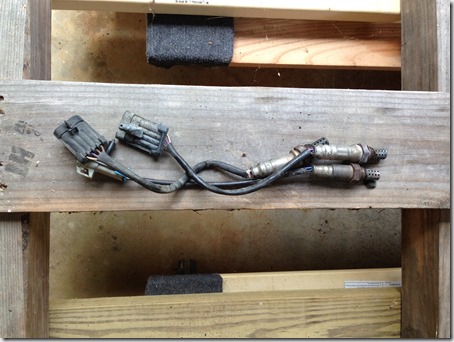 Ah, the Chicken House.  There’s really a lot of back story here, but I won’t bother with it.  Suffice it to say that there is an old chicken house with a slab floor very close by.  For years, it has stored old woodworking equipment that was  used in the family business.  This should give you an idea: 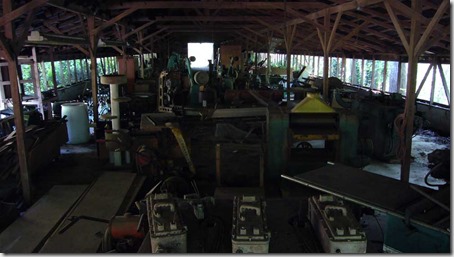 There was hope at one time of bringing these machines back to life and putting them back to use, but it was not to be.  After nearly a decade in their avian abode, I arranged for an old-school furniture shop in north Ga to come take almost everything.  Most of Saturday and some of Sunday was consumed with this process.  Some of the machines will be scrapped, I’m afraid, but some of it will be put back into service.  Bon Voyage, giant, woodworking tools.  Thanks for the memories and I wish you the best. 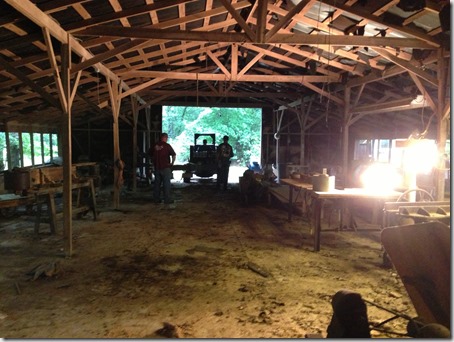 An empty chicken house makes for an acceptable location to continue my efforts with the Wide Ride.  It is not ideal, as the ‘windows’ are just openings and the ancient roof leaks quite a bit on one side.  Still, barring the appearance of a warehouse oriented, lift equipped space (a-HEM!), it will have to do.