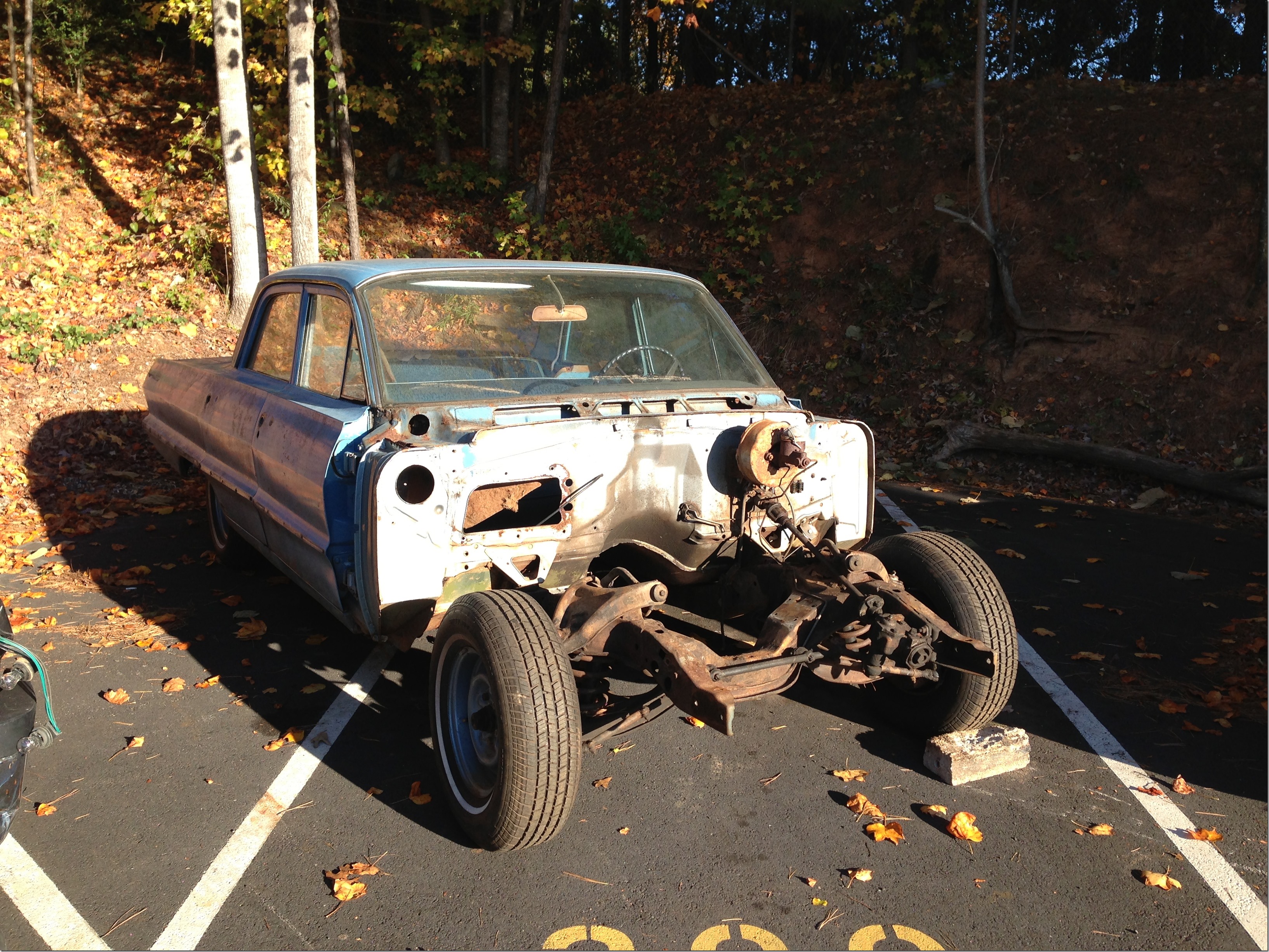 Well, it’s been a while since my last blog update and I’m sure everybody is not wondering what’s going on with the Wide Ride these days.  The answer is either not very much or quite a lot.  After spending some time with BRP Muscle Rods and then with Hedman Headers, The ‘Rider came home very briefly before being whisked away once again to a top secret bunker, where she will be receiving the metallic TLC that she needs as well as a nifty coat or two of paint.

During the brief time that The ‘Rider was back in the driveway, Mr. Cain dropped by to assist in some further de-construction and to mock my record keeping system.  (You must have tags, I say!)  Here he is drilling holes in my car. 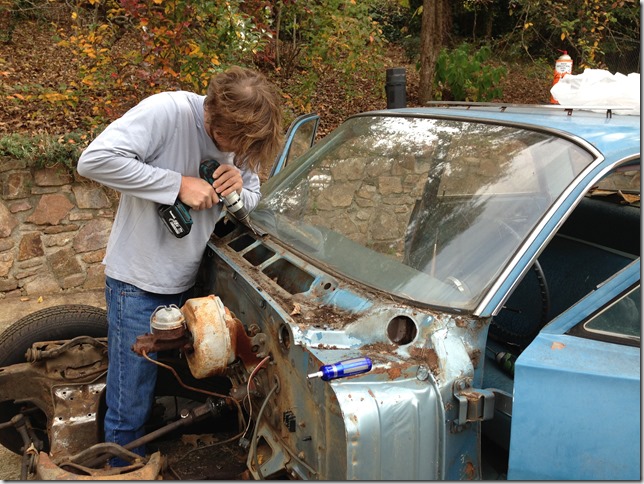 Also, whatever mystery impact dented the bumper and bent the bumper mount bar also bent the frame in a tad at the attachment point.  It’s not too bad.  Hopefully it won’t be a big deal to pop that sucker back.

Not having the car around much has led to a fair amount of down time for yours truly, which I have tried to fill with small, poorly documented sub-projects.  To wit:

With regard to the last point, it occurs to me that I’ve never layed out my overall build plan for all of you hapless readers to enjoy.  I might not have done that because I didn’t know myself, but I’m pretty confident about it at this point, so here goes.

EFI Tank from Tanks, Inc and the usual Corvette regulator set up.

I’m keeping the factory rear and 3.36 gear set, but will be replacing the drive shaft carrier bearing with a beefed up aluminum and polyurethane model that will be able to handle the HP.  To compensate for the bearing’s inability to flex with suspension travel, I’ve procured a telescoping rear shaft section.  Essentially, there’s a slip yoke on the shaft itself to soak up all the motion. (Boom-chicka-wow-wow?)

Complete air ride system from RideTech.  That’s all new A arms, trailing arms and panhard bar, front and rear sway bars and of course, the air bags themselves.  That old, wallowy ride should be a thing of the past.

Borgeson Delphi 600 power steering box and all the original linkages

I had hoped to be able to mod the existing cluster, but Dakota Digital now makes a VHX cluster for 63-64 full size that is just too functional and ‘easy’ to pass up.  Also…cruise control…maybe?

Yeah, I said radio. I’ll be going with the Model 2 from RetroSound.  The Wide Ride will have hands free bluetooth calling!

Lastly, and pre-climactically, I met a guy named Mack in a Waffle House parking lot who gave me my newly re-chromed bumpers in exchange for money.  Nothing could ever go wrong with that scenario.  Still, Chrome It in Marietta did a great job.

Well, I reckon that’s about all for now.  I’m hoping there is a storm coming after this quiet (…or at least a mild squall).  Once the frame comes back from paint and body, work can begin on a rolling chassis.  After that, we’ll just pop the body on and drive off into the sunset.

What I coincidence – I was just not wondering about what was not happening. So you’re not rebuilding the rear axle? I can see keeping the ratio, but no form of limited slip back there seems… Well, you can rotate the tires side to side, I suppose!

I’ll be screwed in the One Wheel in a Puddle of Oil Burnout Contest.

Or when you try to pull away smartly…