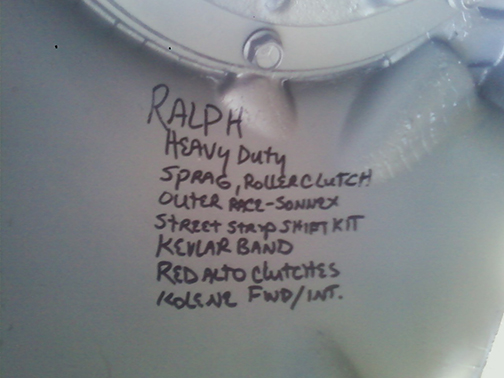 Somewhere in the midst of these ramblings I have made reference to my pal, Gordy.  I became acquainted with Gordy via a close friend of mine, Rory.  Rory and I met as Cub Scout dads some ten years ago.  We discovered our mutual interests included hot rodding…  Rory has a kick-ass, immaculate, tire shredding ’67 Camaro, much of which was mechanically prepared by Gordy.  So, Rory introduced me to Gordy…  The two of them began the process of hassling me for not transforming the Cutlass into a more manly ride.  Not much less than ten years ago, Gordy gave my Q-Jet a working over.  This past Summer I summoned him to work his magic again…  He is a “build it big or you have no sack” kind of a dude.  So…  my transmission for this beast is a no bullshit work of automotive machinery…  One of the photos below is documentation of the content of this hard-core TH-350…  Needless to say, it’ll handle all the abuse I intend to serve it.  Gordy spent the better part of a day rummaging around at a salvage yard to find the appropriate B.O.P. transmission core.  Part of this process was being sure we had the correct tail shaft dimension for the application, in this case six inches.  I received a text message from Gordy requesting I measure the tail shaft of the transmission in my car…  I obliged and sent him the informative and anal retentive graphic featured below.  To be certain the horsepower is delivered at a better than stock level, The stall of the massaged PG torque converter will be roughly 2300.  Nothing crazy, but definitely will do the job.  A street-strip shift kit will assure ballsy shifting and a bark of the tires, which is nice. Hopefully the photos justly illustrate this portion of the journey.  With regard to the last photo…  If one listens carefully, he (or she) can hear a chorus of angels.  The glow is not Photoshopped…  The heavenly image is the real deal…  No bullshit. 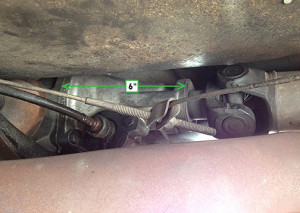 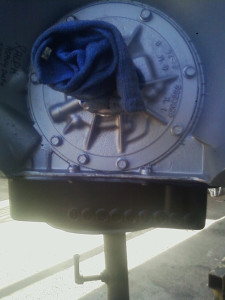 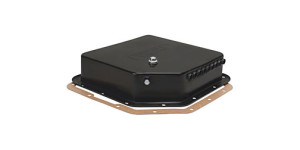 Makes sense to me… 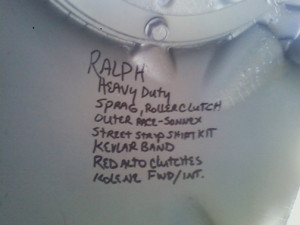 The Ingredients… Scribbled inside the bell housing. 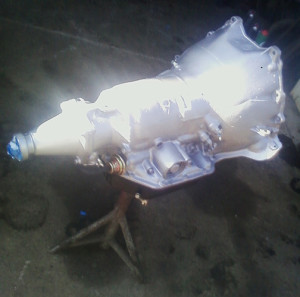 A chorus of angels… Perfect.

Gonna be a while until all this gets put to use…  To say I’m looking forward to doing so is a gross understatement.  This beauty rolls down from Minnesota to Texas somewhere around the end of February.

Woot! Transmissions are magical mysteries- good to know you’ve got that all sorted out… We are now in 2014- June is just around the corner!